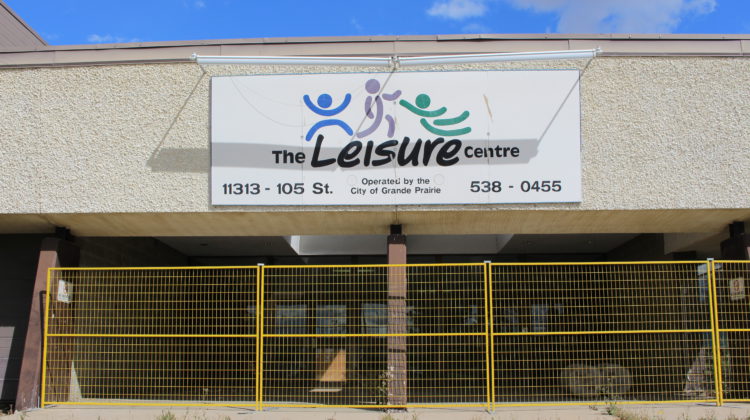 Nearly a decade after it closed its doors to the public, the Leisure Centre and the indoor soccer pitch beside it will be coming down.

Grande Prairie city councillors approved the full demo of the site in a recent meeting, despite having mulled over the option of partial demolition. Councillor Dylan Bressey says the wheels for the $800,000 demolition project got moving when discussions over the Grande Prairie Composite High School demolition became finalized.

“It’s been a long process since we’ve been waiting to have the Composite High School building demolished since it shares a wall with the Leisure Centre,” he says.

“It doesn’t make sense to spend millions of dollars preserving half of a building that’s decade’s old and instead demolish the whole thing so we can start new on that site,” he adds.

Opened in the 1970s, the Leisure Centre closed in 2011 after the city planned to spend $11 million to renovate the pool. During the inspection phase of the construction project, more moisture damage in the structure than originally believed was discovered, which pushed the initial $800,000 remediation cost to above $4 million. The city, at that point, scrapped the project and funnelled funding towards the construction of the Bear Creek Outdoor Pool.

Bressey says, when he moved to the city in 2011, he purchased a home in Avondale partly because it was close to the Leisure Centre. However, when looking at it through a lens of feasibility, he argues it just didn’t make sense to try to salvage some of the building.

“I certainly understand why people are disappointed that this building wasn’t salvageable, but the reality is, it isn’t; we’ve got severe structural issues within it,” he adds.

The city will continue to look at development options in the area, and Bressey believes it could do the municipality well to consider putting in a smaller-scale recreation option for residents in the surrounding areas.

“I don’t think we need a big building with all the bells and whistles on the site, but I definitely do think that we need to continue to have indoor recreation in Avondale on this site.”

Demolition work is expected to take place sometime in late 2022.