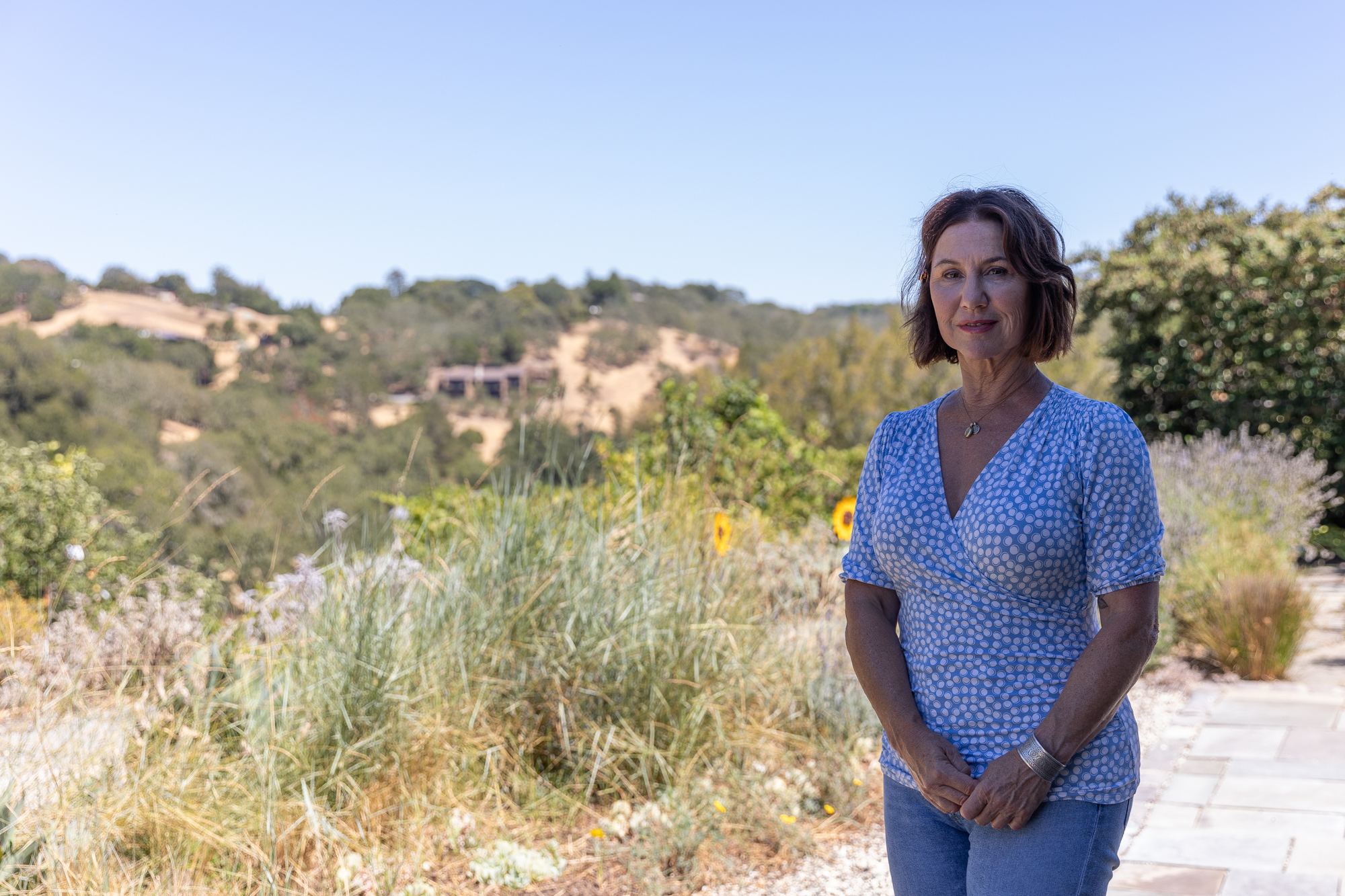 Tobias Freccia checked his mailbox three months ago to find a startling note: Nationwide would not renew his homeowners insurance for the coming year. He scrambled to find a new insurer.

Freccia is not alone. He is on a growing list of Portola Valley residents who are seeing their homeowners insurance rates rise or are simply facing nonrenewal. Residents are trading stories of losing their home insurance, which many attribute to the insurance companies’ concerns about being able to cover wildfire risk to homes in wildland-urban interfaces like Portola Valley, on PV Forum, the online forum for residents. (Town officials say they only have a spotty headcount on how many residents have lost their homeowners insurance. They’ve asked asked residents to contact the town if they do, said Town Manager Jeremy Dennis.)

Insurance companies are becoming wary of insuring homes in the wake of a slew of wildfires in the West. The state’s drought isn’t helping concerns about fire risk. Six of California’s 10 largest wildfires since 1932 were in 2020, according to the California Department of Forestry and Fire Protection. Those six fires burned more than 3 million acres, damaged or destroyed over 7,000 structures and killed 22 people, according to Cal Fire.

The state has stepped in to protect residents’ home insurance policies. Nearly 2.4 million home insurance policyholders in California now fall under a one-year moratorium against nonrenewal of residential property insurance coverage in the wake of 2020 wildfires. Although near to last year’s destructive CZU Lightning Complex fires, Portola Valley is excluded from the state’s moratorium.

A Westridge resident of nine years, Freccia was forced to enroll in the California FAIR Plan, paying $9,000 for fire insurance and $3,000 for homeowners insurance from Farmers (which would not insure him for fire insurance) annually. The plan was established to meet the needs of California homeowners unable to find insurance in the traditional marketplace, and the number of households buying coverage from the program increased by more than 50% between the start of 2019 and June 2020, to almost 200,000 households, according to a September 2020 New York Times article.

The only company that would include fire insurance in Freccia’s homeowners plan wanted to charge $34,000.

“It’s very scary, very frustrating,” he said. He lost his homeowners insurance two years ago after a home remodel as well. “It makes you feel a little bit helpless.”

Banks won’t hold your mortgage if you go without homeowners insurance, so Freccia didn’t even consider going without. He’s not thrilled about enrolling in the state’s home insurance policy, noting that the limit of what the plan will cover is lower — closer to $2 million, when his home is worth about $3 million.

“We do the best we can to mitigate any fire,” he said. “It’s very distressing considering homeownership tends to be one of the better assets people have. It could be pretty devastating (if his home is destroyed in a wildfire) because we wouldn’t be able to rebuild on the property; we’d have to cover part of it out of pocket.”

There is severe risk of wildfire in several neighborhoods of Portola Valley, a woodland town abutting the Santa Cruz Mountains, according to 2008 analysis. A map prepared that year by Ray Moritz, a consultant in mapping fire-prone vegetation, indicates that threats rated “very high” exist in some Portola Valley neighborhoods, and threats deemed “high” exist in many others, based on the proximity and topography of fire-prone forested areas.

The “very high” fire risk label affects new home construction, requiring the use of ignition-resistant materials and fire-safe landscape management. In 2009, residents complained that the label could negatively impact their insurance rates.

The cancellations are not entirely new: A look back at Town Council meeting minutes shows residents have complained about the topic for years.

Anne Ashmead, who has lived near Woodside Priory School since 1996, was surprised when Nationwide sent her a letter in May stating that it would not renew her homeowners insurance because the company was not willing to cover properties worth more than $1.5 million.

“I was just like, ‘What? why?'” Her insurance agent told her many insurance companies are declining to insure homeowners in the area. She’s now looking at paying about 30% more for insurance.

Jack Troedson, who’s lived in the Alpine Hills neighborhood for 32 years, also learned Nationwide would not renew his homeowners insurance when it expired in mid-August. There was no explanation in the letter, but his insurance broker said it was because of the wildfires in California.

“All of us, seeing the fires over the last several years, were wondering ‘What’s this going to mean for fire insurance?'” he said.

His insurance broker found him another policy, which was twice as expensive. He declined it. He found a comparable homeowners insurance plan — through State Farm — that is slightly less expensive than his plan through Nationwide.

“The good news is we’ve got coverage, but bad news is we had to go through the hassle,” he said. “My concern is next year State Farm pulls out; it depends on how it shakes out with fires in the fall.”

Former Councilwoman Ann Wengert has lived in central Portola Valley for 22 years. In early January, she received notice that Nationwide would not renew her homeowners insurance when the policy expired in July; this was the first time she faced nonrenewal.

“I wasn’t terribly surprised,” she said, noting the letter didn’t include specifics on why her plan was being terminated. “With the scale and number around town anecdotally, indicating it’s beginning to be more common. … I knew it wasn’t worth changing their mind. Insurance companies usually make these changes based on regional issues.”

She moved to USAA. Wengert says she doesn’t see this trend changing.

“So many things have been evolving and changing in each year,” she said. “If COVID has taught us anything it’s that Plan B is the way of the world.”

Portola Valley Mayor Maryann Derwin, who lives in the Westridge neighborhood, lost her homeowners insurance twice in the last year. In March 2020 she received a letter from Safeco Insurance saying that her policy would not be renewed, leaving her three months to find a new carrier.

“I spoke with a community member who received the same letter a month earlier and was appealing the decision to no avail,” she said in an email. “My broker worked to find a new insurer, but the pickings were slim: I could choose between a surplus line’s insurer such as Scottsdale or Lloyds of London, or the California FAIR Plan known as insurance of the last resort, offering basic fire insurance for those who have (been) rejected by traditional insurance companies.”

At that time, the maximum coverage through the FAIR Plan was $1.5 million, but has since been increased.

“At the last minute my broker figured out that Nationwide had rejected me because of an alleged (wood) shake roof; I do not have a shake roof, so she applied again, and they would write me a policy if I agreed to install a central alarm system and bundle my homeowner’s insurance with my auto and umbrella policies,” she said.

A year later, she received the dreaded letter from Nationwide saying it was not going to renew her policy because the value of her house exceeded Nationwide’s maximum coverage. Her home is classified as a “high value house in brush.” The decision felt “capricious” and “unethical” because Nationwide hadn’t even insured her for a full year before dropping her like a “bad habit.”

“This time my broker was told that I was not eligible for a CA Fair Plan policy unless a surplus lines insurer had rejected me, putting me in the unenviable position of facing a very expensive policy with less coverage than I had with Safeco or Nationwide,” she said. “So, she tried one more option, calling a friend at a State Farm agency who agreed to look at my property. After a rather exhaustive set of questionnaires, forms, phone calls and visits, State Farm agreed to insure me. As with Nationwide, I had to move my auto and umbrella policies.”

The town’s Wildfire Preparedness Committee has been studying this insurance issue for a few years now. This spring, Dennis spoke with state Insurance Commissioner Ricardo Lara, who was sympathetic but said there are limits as to what he can do to help since he cannot mandate a moratorium on nonrenewals of homeowners insurance policies; only the state Legislature can do that, and those in the know say it is not going to happen, according to Derwin.

Derwin encourages community members to reach out to Lara’s office to document the loss of their homeowners policies.

“I am concerned that there will come a time when fire insurance will be a supplemental policy just like earthquake insurance — costly and minimal in coverage — causing property owners to essentially self-insure,” she said. “That along with sky high home prices, will destine Portola Valley to become an even more exclusive enclave for the rich and to me, that is heartbreaking. This is not who we are, or perhaps more accurately stated, this is not who we used to be.”

Editorial Team
27 January 2022
San Jose became the first known jurisdiction in the U.S. to require owners of guns to purchase liability insurance. If...

Editorial Team
27 January 2022
Drivers are increasingly switching their auto insurance, according to a new study. Here's what they're looking for.  (iStock) Drivers on...

Editorial Team
26 January 2022
Ontario has some of the highest car insurance rates in the country, but for the first time in a long...