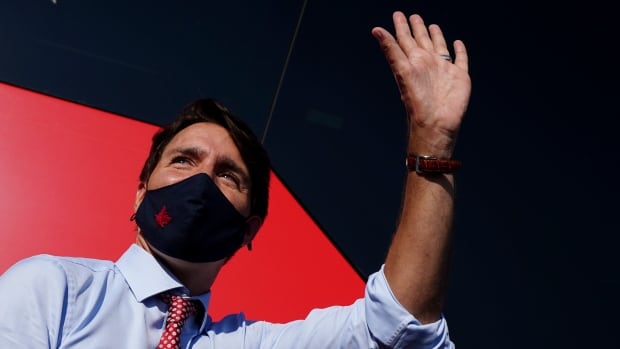 Speaking to reporters at a campaign stop in Surrey, B.C., Trudeau said Canada’s major banks and insurance companies have recovered from the COVID-19 crisis better than companies in just about any other industry and should pay more to help offset the cost of ambitious post-pandemic programs.

The commitment comes during a week when Canada’s banks are reporting eye-popping quarterly profits fuelled by drawing down the capital reserves they set aside last year to guard against possible COVID-related loan losses.

The banks are also sitting on piles of cash because regulators have blocked them temporarily from distributing more money to investors through dividends and share repurchases.

Trudeau said that, if re-elected, his government would raise the corporate income tax rate by three percentage points — from 15 per cent to 18 per cent — on all bank and insurance earnings over $1 billion to “support middle-class Canadians in their goal of home ownership.”

Trudeau announced on Tuesday a three-point housing plan — a program to give Canadians more financial support to buy a home, boost the housing supply and establish a Home Buyers’ Bill of Rights that would ban real estate practices like blind bidding.

Trudeau said today that a re-elected Liberal government would also establish something called the “Canada recovery dividend,” which would force these same financial institutions to “contribute more over the next four years of Canada’s recovery.”

While details about this “dividend” remain thin, the party said the sums banks and insurance companies would have to pay would be decided “in consultation over the coming months with the Superintendent of Financial Institutions” and would be levied over a four-year period.

The party said these two initiatives would generate “a minimum” of $2.5 billion a year over the next four years, starting in the 2022-23 fiscal year.

“During this pandemic, Canadians all tightened their belts, Canadians made tremendous sacrifices. That wasn’t the case for everyone. Given our banks have reported extraordinarily large profits and have been incredibly successful, we’re going to ask them to do a little bit more,” he said.

“As we rebuild, we’re going to ask big financial institutions to pay a little back so we can do more for you and, in particular, so we can help you own your home and own your future.”

Trudeau said the government wouldn’t tolerate “sophisticated tax planning or profit-sharing” by companies looking to dodge the new measures. He promised new “targeted anti-avoidance rules” to ensure the companies pay what the Liberals want them to pay.

The party is also promising to enhance the powers of the federal Financial Consumer Agency of Canada to better police “excessive” fees charged to customers and to ensure the cost of the new corporate tax measures is “not passed on to consumers.”

NDP Leader Jagmeet Singh has been pushing Trudeau to rein in what the banks can charge their customers during this health crisis. The party has asked the government to try to temporarily block the banks from charging interest on mortgages and cut credit card fees paid by small businesses for payment processing.

The NDP has long proposed a system of postal banking to bring financial services to rural and remote communities where the big banks have closed branches. The party wants Canada Post to offer everyday banking services like chequing and savings accounts — a model that is used in countries like Italy and New Zealand — to challenge big financial institutions like BMO, CIBC, RBC, Scotiabank and TD.

The party’s platform also includes a promise to force financial advisers to offer advice that’s in their clients’ best financial interest rather than that of “the bank’s bottom line.”

Conservative Leader Erin O’Toole has also promised to take on the big banks. In the platform released last week, the party promised a Conservative government would bring in legislation to allow for more banking competition by “fintech companies,” order the Competition Bureau to investigate bank fees and require more transparency for investment management fees so “seniors and savers don’t get ripped off.”