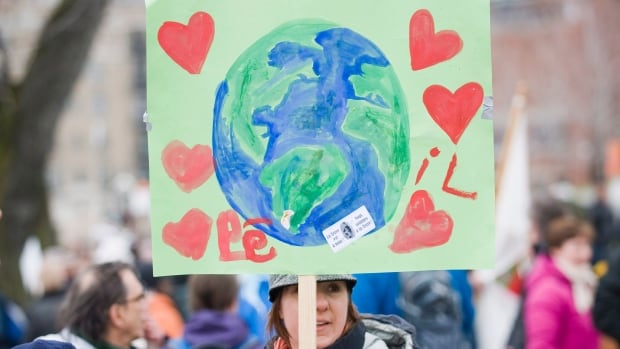 It’s difficult to ignore the parched fields and smoky skies caused by catastrophic fires in British Columbia this summer. These realities can put stress on young people and their parents, according to a Saskatchewan social worker.

Eco-anxiety and concerns around climate change are nothing new to Amy Snider, a part of EnviroCollective.

“It’s been kind of an unspoken debate or dilemma of ours to know how much to talk about climate change in front of our son. And we don’t know the answer to that,” the Regina mother told The Morning Edition.

Snider said she doesn’t know the right amount of awareness for children to have. She’s concerned that the burden of climate change knowledge is going to be too much and it could damage children psychologically to know people are destroying the planet.

“We are doing things to damage ecosystems that are necessary for the life systems on Earth to function, and just simply that we’re ruining the beauty around us,” Snider said. “That is a burden that he has on his shoulders. That gives me deep grief, this deep, intense grief.”

Christine Freethy is a registered social worker in Saskatoon and works with children to address anxiety and depression over climate change. She said there’s a wide range of anxieties depending on the age of the child and that parents might be surprised how much their kids are thinking about it.

“I would suggest to parents who think their kids are concerned about climate change or anxious about it, to have a very frank discussion with them,”  Freethy said.

Parents should think about the age of their child, similar to how conversations about the birds and the bees are different based on a child’s age. However, they should also start early and introduce concepts gradually over time.

“So a younger child might have less information but might have concerns about, you know, things that they are seeing in the weather, things they’ve heard on and seen on the news, things they’re hearing adults talk about,” she said.

10:59How to talk to your kids about climate change anxiety

It’s been impossible to ignore the parched fields and smoky skies this summer, or news of catastrophic fires in B.C. and elsewhere in the world. It’s putting climate change front and centre, which can cause a lot of stress for young people and their parents. What’s the best way to have conversations about climate change without causing anxiety? Registered social worker Christine Freethy shares some tips. 10:59

Parents should ask kids what they are thinking about, what they’re worried about and what they understand about it, Freethy said. Then parents should acknowledge their child or teenager’s feelings and start the conversation with alleviating some of the anxiety.

“There’s a real worry about their future. What will the future be like? They have children who have a very vivid imagination. So they have like a dystopian idea of the future,” Freethy said.

They really need to feel that there is an avenue for their concerns​.​​​​​​– Christine Freethy

Climate change will be affecting their future, but at the same time people don’t know what exactly it is going to be like, she said.

“It’s not going to be necessarily as inventive or as extreme as a seven or eight or 10-year-old can imagine,” she said.

The next thing to address is feelings of hopelessness, she said.

Parents can do that by thinking of practical things they can do, like making changes in their home to use less energy, eat differently, plant more trees and explaining that just because someone doesn’t believe in climate change doesn’t make them a bad person, she said.

“It might seem silly, but they really need to feel that there is an avenue for their concerns,” she said. “I really think that one of the most important things for parents is to acknowledge that the grief and the anxiety is real.”

Editorial Team
21 January 2022
Hemp seeds are a plant-based source of complete protein that provides a range of nutrients. It is an excellent option...

Editorial Team
21 January 2022
Students in the 5 day pre-K class at Immanuel Unite Church of Christ line up to go outside after helping...

Editorial Team
21 January 2022
According to Snyder, the reason affirmations can make you feel uneasy is because you listen to the overly critical mind....