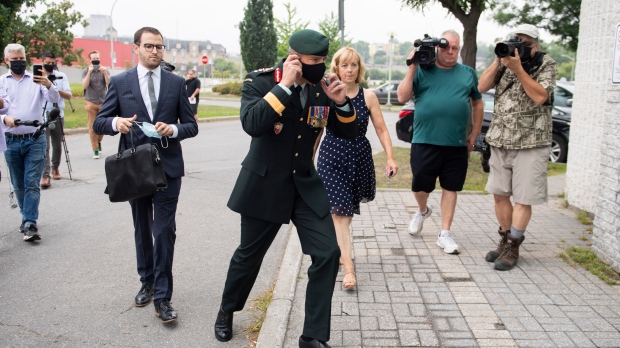 OTTAWA — Maj.-Gen. Dany Fortin says he will defend himself “vigorously” after formally being charged with one count of sexual assault following a police investigation.

Appearing outside a Gatineau courthouse on Wednesday, Fortin said he heard from the Canadian Forces National Investigation Service (CFNIS) about the arrest warrant on Monday, and will now pursue two avenues of legal recourse.

“The arrest warrant was a total surprise. I am reluctantly, and at my own expense, forced to pursue two forms of legal redress. The first, to vigorously defend myself against the charge laid today in criminal court and second, ask the federal court to consider the lack of due process afforded to me throughout this whole ordeal,” said Fortin.

Fortin has denied any wrongdoing regarding the charge that’s in relation to an allegation that dates back to early 1988 when he was a student at the Royal Military College in Saint-Jean, Que. According to court documents, the incident is said to have occurred between Jan. 1 and April 30 of that year.

Fortin was the face of Canada’s COVID-19 vaccination rollout until mid-May, when he was removed from the post as the investigation came to light. Five days later, the CFNIS referred a sexual misconduct investigation to the Quebec prosecution service to determine whether criminal charges should be laid.

Fortin and his legal team have pushed back against his dismissal and the allegation against him. They are pursuing a judicial review of the decision to remove him from his position, citing procedural unfairness and political interference by Prime Minister Justin Trudeau, Health Minister Patty Hajdu and Defence Minister Harjit Sajjan.

“As the acting chief of defence staff told me, confirmed in his personal notes, the decision to remove me was a result of political calculus,” he said. “I just want to get back to work.”

CTV has not independently verified these claims.

The application for review, in part, asks that Fortin resume his position with the Public Health Agency of Canada – a position now held by Brig.-Gen. Krista Brodie.

Fortin said the last several months have been a “nightmare” for him and his family.

“I’ve been forced to read much about me in the media with no ability, or no outlet to defend my name.”

The Canadian Armed Forces has been gripped by a flurry of high-profile departures as of late, following allegations of sexual misconduct and subsequent police investigations.

Military police launched an investigation of allegations of misconduct directed at the former chief of the defence staff Gen. Jonathan Vance on Feb. 4, following his retirement.

In mid-July, Vance was charged with obstruction of justice under the Criminal Code for allegedly for attempting to persuade a woman to make false statements about their past relationship.

Vance’s successor, Admiral Art McDonald was also the subject of a misconduct probe but the Canadian Forces Provost Marshal said the investigation did not “reveal evidence to support the laying of charges under either the Code of Service Discipline or the Criminal Code of Canada,” a statement read.

Fortin’s lawyer said he’s due to be arraigned at the Gatineau courthouse on Sept. 20. A publication ban is now in effect to protect the identity of the victim.

On the campaign trail on Wednesday, Liberal Leader Justin Trudeau said he won’t be commenting on case specifics as it’s before the courts, but underlined the importance of creating a safe and supportive environment within the Armed Forces.

“We need to make sure that anyone who comes forward with allegations or concerns is receiving the proper support, the proper resources but at the same time that we work to transform the culture of our Canadian Armed Forces,” he said, before turning the microphone over to Sajjan who was accompanying his leader at the B.C. event.

Asked how he plans to defend his record on this issue to constituents, Sajjan said it’s been his focus since day one of taking the job and he remains committed to it.

“Anytime that something comes forward we want to make sure that all the survivors are supported and that’s exactly what we’ll be doing as we learn more information,” he said. “It takes time but we have to remain strong and committed.”

Veteran and Conservative Leader Erin O’Toole also weighed in on Wednesday, more generally pointing blame at the Trudeau government for their handling of sexual misconduct allegations in the military.

“We have to make sure that women can serve their country with respect, and free of harassment. The fact that the office of the prime minister covered up sexual misconduct allegations for three years was a travesty and Canadians deserve better, particularly those who put their country first,” he said.

NDP Leader Jagmeet Singh reflected on the Fortin case, stating that what concerns him most is the message being sent to women.

“Women have raised serious concerns that have been completely ignored by the highest office of this land, by the defence minister, by the prime minister and his office,” he said, speaking to reporters on Wednesday. “Women are being sent this chilling message that they’re not being listened to, that they’re not being heard and their concerns aren’t being taken seriously.”

He said an NDP government would immediately implement an independent reporting process for victims – something the other parties have said they would prioritize.

With files from CTVNews.ca’s Brooke Taylor.