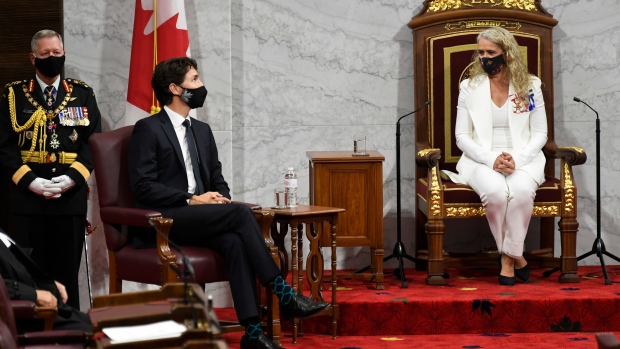 OTTAWA — In its 2020 speech from the throne, the Liberal government outlined its plan for “bold action” on health, the economy, equality and the environment during the remainder of the COVID-19 pandemic and beyond.

For a sneak preview of the Liberals’ election platform, one probably need not look much further than that.

While they’ve made some progress delivering on the promises in the throne speech, there’s plenty of unfinished business.

Here’s a snapshot of some of the biggest promises made and where they stand now.

The Liberals promised to create over one million jobs, restoring employment to pre-pandemic levels. According to July employment statistics, Canada still had 246,000 fewer jobs than it did in February 2020.

The speech promised “a significant, long-term, sustained investment” to create a national child care system, followed by a 2021 budget promise of $30 billion over five years to cut fees for parents in half by the end of next year, and to an average of $10 a day by 2026.

The government has so far committed nearly $12.7 billion over five years in bilateral agreements with eight provinces and two territories aimed at achieving those objectives. However, Ontario, the largest province, has not yet signed on, nor has Alberta.

The Liberals said they will ensure web giants pay their fair share of taxes in Canada, including requiring them to share their revenues with content creators and contribute to the creation, production and distribution of Canadian content.

The government introduced Bill C-10 to require online streaming giants like Netflix and Amazon Prime to promote Canadian content and financially support Canadian cultural industries, just as traditional broadcasters are mandated to do.

But critics maintained it would stifle free speech, regulating what individuals post on social media. It was eventually passed by the House of Commons in late June, despite Conservative delay tactics. However, senators refused to be rushed into passing it before they adjourned.

With the dissolution of Parliament for the election, the bill is now dead.

Just hours before the Commons adjourned for the summer, the Liberals introduced a bill aimed at combating online hate. It would allow individuals or groups to file hate speech complaints with the Canadian Human Rights Commission.

That bill is now dead. The government never did introduce other long-promised legislation governing how social media platforms deal with hate speech.

Following the heart-wrenching stories emerging from long-term care homes during the pandemic, the Liberals promised billions to help provinces improve the broken system.

The throne speech included a pledge for new national standards, which the spring budget said would be funded with $3 billion over five years starting in 2022. Those standards, in development by the Health Standards Organization and Canadian Standards Association, aren’t expected until late 2022 or even early 2023.

The Liberals have been promising to make prescription drugs more affordable since coming to office and in 2019 specifically said they’d work toward a national, universal pharmacare program. The throne speech promised to “accelerate” that work.

The first sign of that came just days ago, when, on Aug. 11, a $35-million deal was signed with Prince Edward Island for the province to expand its public drug plans and lower the out-of-pocket costs for people who qualify for them.

The Liberals promised to introduce a plan to exceed Canada’s 2030 climate goal and legislate a commitment to reach net-zero carbon emissions by 2050. The latter was introduced in a bill last fall, which passed by the skin of its teeth in June.

The Liberals signalled to the United Nations in July that Canada was increasing its 2030 emissions reduction goal from 30 per cent below 2005 emissions levels by 2030, to 40 to 45 per cent below 2005 levels. Environment Minister Jonathan Wilkinson says current policies would get to a 36 per cent reduction by 2030, but hasn’t yet unveiled the additional measures that will take it further.

The Liberals had promised to end boil-water advisories in all reserves by last spring but missed that self-imposed deadline. They have not set a new deadline but say they’re working on it as fast as possible.

As of this month, advisories in 109 communities have been lifted since the Trudeau government was elected in 2015. But 50 advisories remain in effect in 31 communities. The government has committed $1.5 billion to finish the job.

Racism in the justice system

The throne speech promised a number of policies to address long-standing racial inequities in the criminal justice system, including addressing the overrepresentation of Black and Indigenous people in Canadian prisons.

The government introduced in February a bill that would eliminate mandatory minimum sentences for some drug and gun-related offences and expand access to alternative sentencing. It did not make it past second reading in the Commons and is now dead.

Nothing has yet moved to enhance civilian oversight of police, modernize police training, or introduce standards for the use of force.

The throne speech promised an update to this legislation and followed through with a bill introduced in mid-June. The bill recognized that French was the official language in Quebec, guaranteed the right to be served and work in French in Quebec and in parts of Canada with strong francophone representation, and reaffirmed the importance of maintaining Indigenous languages.

The bill also died without being passed.

The Liberals promised to ban conversion therapy in their 2019 election platform. The throne speech further committed them to stand up for values that define the country, including the celebrating the LGBTQ community.

They did introduce a bill in October 2020 to ban the practice, which forces individuals to undergo therapy intended to alter their sexual orientation or gender identity. It was repeatedly delayed by the Conservatives, many of whom argued it would outlaw conversations between someone wrestling with their sexual identity and their parents, counsellors or religious leaders.

The bill was eventually passed by the Commons in June but the Senate adjourned before dealing with it. It is now dead.

This report by The Canadian Press was first published Aug. 15, 2021.