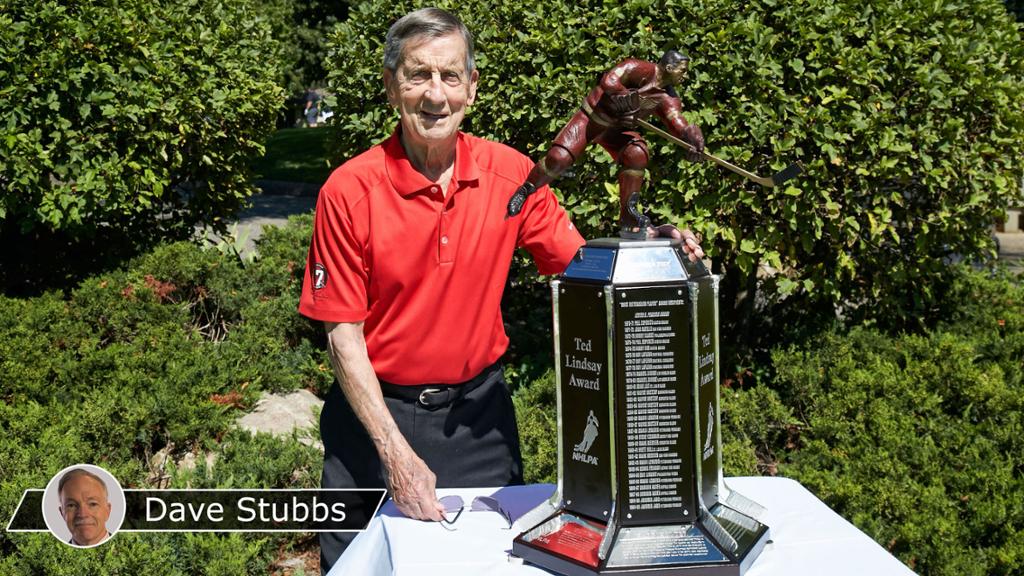 “I love a good fight,” Lindsay often said of his life and passions, whether they be on or off the ice.

So it is that the charity work of the giant-hearted Terrible Ted continues nearly 18 months after his death, the Ted Lindsay Foundation raising huge sums for awareness of and research into autism, and for the care and treatment of those touched by disorders across the spectrum.

On Sept. 13, an estimated 200 golfers and guests will gather in Detroit for the foundation’s 21st Annual Celebrity Golf Outing, the crown jewel in fundraising efforts.

Lindsay was deeply moved in 2001 by the story of a friend whose young son had been diagnosed with autism. He created the Ted Lindsay Foundation to help raise awareness and a little money; 20 years later, it has collected more than $5.5 million, with operating expenses consuming only a dime or so of every dollar raised.

“There are many medical terms and I’m not smart enough to understand them, so I’ll just keep working at it,” Lindsay joked in 2016. “The one thing I know how to do is raise money.”

Lindsay, who died at age 93 on March 4, 2019, was an icon who played 17 take-no-prisoner seasons in the NHL, winning the Stanley Cup four times during the 1950s with the Red Wings. He also co-founded the NHL Players’ Association.

In 2010, the Lester B. Pearson Award, given annually to the most outstanding player in the NHL as voted by members of the NHLPA, was renamed the Ted Lindsay Award to celebrate his pioneering work with the organization.

Ted Lindsay at Joe Louis Arena in Detroit in 2008.

But away from the rink, especially after Lindsay had hung up his skates for good, people knew the famous No. 7 not as a clenched fist but as a butter-soft handshake.

His daughter Lynn, her husband, Lew LaPaugh, and a small group of staff and many volunteers keep the foundation operating with great energy in the spirit of Lindsay and his late wife, Joanne.

Lynn remembers the public visitation for her father at Little Caesars Arena four days after his death, with thousands paying final respects.

Ted Lindsay signs a baseball cap at his golf tournament in 2016.

“Our family talked that night about how amazing it was to hear the stories from people we met that day,” she said. “It was so heartwarming to hear how many people Dad touched in so many ways. How he took the time, how he was never rushed, that when he signed an autograph, there was nothing else in the world going on. He would ask about the person he was meeting, actively involved in the conversation.”

LaPaugh stopped midsentence, choking back emotion, when he considered what he misses most about his friend and father-in-law, who died at home surrounded by his family.

“It’s just how Ted treated people,” he said. “Everybody was the same. Nobody was bigger or better. When he confronted you, he wanted to know if you were doing your best.

“If there was somebody in line when he was signing autographs and it was supposed to be a two-hour session, he’d stay for six hours. If they came to see him, they would get his autograph. He respected the people and the fans.

“This was classic,” LaPaugh said. “Ted and I went down to Little Caesars Arena in 2017. The Red Wings wanted to show him their big, new, beautiful building. Ted walked up to the players in the dressing room, looked them in the eye and said, ‘You don’t deserve this yet, so what are you going to do to earn it?’ He didn’t pull any punches. He was always straightforward. You always knew exactly where you stood.”

The Hockey Hall of Fame learned that in 1966, when Lindsay boycotted his own enshrinement because families weren’t invited to attend. That policy was changed the following year.

The ambitious fundraising work on behalf of autism became a passion for Lindsay and his wife. Joanne died in 2017, before the Oakland University Center for Autism Outreach Services was renamed for the couple. The facility in Rochester, Michigan, which supports community teenage and adult autism programs, was branded the Joanne and Ted Lindsay Autism Outreach Services at Oakland University on Nov. 27, 2018.

Lindsay was on hand that day, his last public appearance before his death, for his foundation’s pledge of $1 million to provide pre-employment training and social programs for teens and adults impacted by autism.

“It was very special to Dad that Joanne’s name was attached to that,” Lynn said. “They had such a love affair.”

The foundation’s inaugural golf tournament in 2001, co-founded by Lindsay’s close friend Ed Heike, was modest, raising about $50,000. The goal this year is $200,000, mostly through sponsorships, not an easy target given the restrictions because of the pandemic.

“The golfers had had enough of COVID cabin fever last year, so they were happy to be outside,” LaPaugh said, recalling the 2020 outdoor luncheon and post-golf banquet. “Right now, we’re scheduled to go indoors (at Detroit Golf Club) but we’ll have a Plan A and Plan B depending on health protocols. Either way, we’ll make it happen.”

Ted Lindsay autographs a chair made from the shafts of wooden sticks at his 2017 golf tournament.

The tournament is loyally supported by the Red Wings, baseball’s Detroit Tigers, football’s Detroit Lions and businesses large and small.

A component of the event that was very dear to Lindsay’s heart returns for its 11th year. In 2010, LaPaugh conceived the Ted Lindsay Foundation Courage Awards. There is a $3,000 prize, voted by a committee to an individual diagnosed with autism who displays extraordinary character and perseverance, and a $3,000 award presented to a different individual’s family.

“Dad always said that autism affects the whole family, not just the person who has been diagnosed, and others around them,” Lynn said. “Their stories are always amazing. There’s never a dry eye in the place when you hear them speak about what they’ve been through and had to overcome.”

LaPaugh said it’s important that the winners share their journeys, recalling the impact one had years ago on then-Red Wings coach Mike Babcock.

“You raise money for an organization, but unless you attach a person or a face to it, you don’t get the full impact of what we’re doing,” he said. “That’s why we have these kids and their families at the dinner. They get up and speak and it’s incredible what they do. One year, toward the end of his talk, a young man said, ‘I’m looking for a job if anybody’s interested,’ and Mike said, ‘If you guys don’t hire this guy, I will.'”

In their twilight years, Lindsay and his wife sat with Lew and Lynn LaPaugh to discuss the foundation’s future.

“They hoped that it would continue,” LaPaugh said. “We’re very happy to see that their wishes are honored.”

And about the tournament going off without a hitch?

“If it doesn’t,” he said, laughing, “I’m sure Ted will have something to say to me about it.”

For information on the Ted Lindsay Foundation and the celebrity golf outing: tedlindsay.org