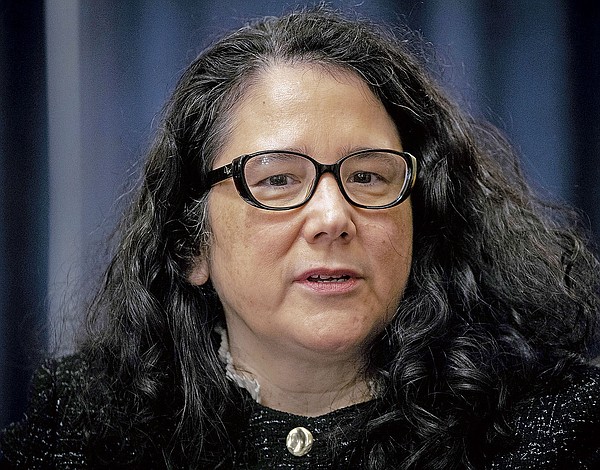 The hospitality industry — hotels, restaurants and other leisure-related businesses — still bears the brunt of the resurgent covid pandemic, local business leaders told the director of the federal Small Business Administration on Friday.

“I was staring at a blank calendar, and it made me want to cry,” Brian Crowne, co-owner of George’s Majestic Lounge in Fayetteville told the federal administrator. The calendar was blank because the business booked no acts for months. The 94-year-old live music venue in downtown Fayetteville shut last year for 134 days. “My mortgage and my insurance didn’t change,” he said.

Crowne was one of 11 businesses leaders who met with SBA administrator Isabella Casillas Guzman in Fayetteville on Friday afternoon in a conference at TheatreSquared. Guzman came to Northwest Arkansas at the invitation of 3rd District Rep. Steve Womack, R-Rogers.

Womack is an important congressional ally of the agency in budget battles in Washington, Guzman said earlier that day in Rogers. Womack is a former mayor of Rogers with a history of supporting small business dating to his time as mayor.

Womack told the group he was particularly impressed with how the agency handled a massive expansion almost overnight. The agency went from a $40 billion portfolio of grants and loans to more than $1 trillion dollars in relief during the pandemic, he told the group in Fayetteville. The assistance was vital in keeping many of the businesses afloat in Northwest Arkansas and around the nation, Womack said.

“I thought that was the end,” Edward Vega, owner of the Springdale Civic Center, said of covid. SBA assistance was a “lifesaver,” he told Guzman. Nancy Price, executive director of the Opera of the Ozarks, told Guzman two-thirds of its revenue vaporized after the pandemic reached Arkansas.

Guzman and Womack also presided over a round table Friday morning with 15 local representatives including business executives, regional administrators of the agency and other business support groups and chamber of commerce presidents from Fort Smith, Bentonville, Rogers and Springdale.

The morning round table took place after the administrator and congressman toured Mundo-Tech, a manufacturing company producing specialty tubing and pipes for the aerospace, defense and commercial airline industries.

“My biggest concern is the hospitality industry,” said Raymond Burns, Rogers-Lowell Area Chamber of Commerce president, in his remarks at the roundtable. “They’re not going to recover this year.”

TheatreSquared opened its doors in September 2019. Covid’s first confirmed case came the following March. SBA assistance to the nonprofit drama theater helped the theater survive, artistic director Robert Ford told Guzman. “We were almost shut down by covid but covid did not win,” he said.

Northwest Arkansas grew big enough to attract more fine dining, bars and other gathering places in recent years, local leaders have said for years. Most other businesses were hit by the pandemic, but the blooming nightlife in the area suffered severely, they said.

The Small Business Administration has a long history of helping small local businesses in the Northwest Arkansas region, but those efforts hugely expanded during the covid pandemic that began last year, Womack said.

Mundo Harbaugh, president of Mundo-Tech, agreed. The agency helped his company get through the post-9/11 drop-off in commercial aviation manufacturing in 2001 and was vital again in helping his company keep skilled workers during the covid pandemic with Paycheck Protection Program lending, he said.

The latest round of federal covid assistance included $28.6 billion for the Restaurant Relief Fund targeting that industry — money that almost immediately went out and was a fraction of the $72.2 billion applied for by businesses, according to news accounts.

Northwest Arkansas has an outstanding network of groups such as the chamber and business organization at the University of Arkansas to help local businesses navigate government programs, helping both the businesses and her agency in getting assistance where it is most needed, Guzman told the group.

The links between the SBA and the business community in Northwest Arkansas were always strong and are stronger now than they were before the pandemic, Guzman said after the Fayetteville meeting.

One aspect of the pandemic that hasn’t received enough attention, she said, was the emotional toll of the situation outside of the financial difficulties.

“These businesses often have small staffs who are like family,” she said. Laying off workers who have been a close part of a business owner’s life for years is traumatic, she said.

Editorial Team
21 January 2022
Ontario health officials reported that 4,114 people are in hospital with COVID-19, and 590 of those patients are in intensive...