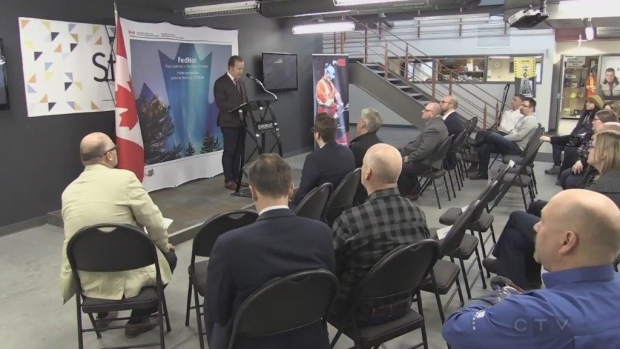 SUDBURY — The construction sector in northern Ontario got a big boost this morning as Labour Minister Monte McNaughton announced more than $1-million in two projects that will provide free training.

The first investment will include $582,000 for the Northern Centre for Advanced Technology (NORCAT) to train 20 participants with the skills they need to build things like roads, move minerals and harvest forests.

Those applicants are being encouraged to apply to Thunder Bay and will largely benefit those from the North Bay and Thunder Bay areas.

The second involves $467,500 to the International Brotherhood of Electrical Workers Local Union 1687 (IBEW 1687) to train 625 electrical workers across Northern and First Nations communities. Those workers will be trained in Sudbury.

It’s all part of a $115-million skills development fund to address labour shortages.

“These workers are doing extraordinary things, like they have throughout our history, and they will bring us back stronger than ever,” said McNaughton.

According to the government, there were 13,380 job vaccines in the construction sector during the first quarter of 2021 and the minister says 2,000 of those jobs are in Northern Ontario.

NORCAT CEO Don Duval says this is big news for northern Ontario and its economy.

“There’s a strong desire to wanting to contribute to your community’s economic and social prosperity, these at-risk individuals who just need an opportunity to you know have access to a pool of capital that will enable them to have the skills to get the credentials they need for these well paying, in-demand jobs that are not only a job but they’re great stepping stones to a meaningful career in their communities so we couldn’t be more excited and proud,” said Duval.

NORCAT’S training program will be offered from September 13 to December 3, 2021. According to the provincial government, the average hourly wage for an industrial electrician in Ontario in 2020 was $35.47 while it was $31.35 for a heavy equipment operator (excluding cranes).

The minister was also asked during his time in Sudbury to respond to criticism over Ontario’s lack of a vaccine certificate.

And that without one, it could lead to another shutdown as COVID-19 numbers start to increase under a fourth wave.

“I mean we have a world-leading jurisdiction in terms of vaccination rates, we’re going to continue to ensure that people continue to go out and get vaccinated. One of the actions I took was to bring in a comprehensive plan, three paid sick days, that’s 21 sick days in all and workers across Ontario can use those three days to go out, get vaccinated and recover from vaccinations,” said the minister.

Ontario’s neighbours, Manitoba and Quebec, have already both started to implement their own passport programs.