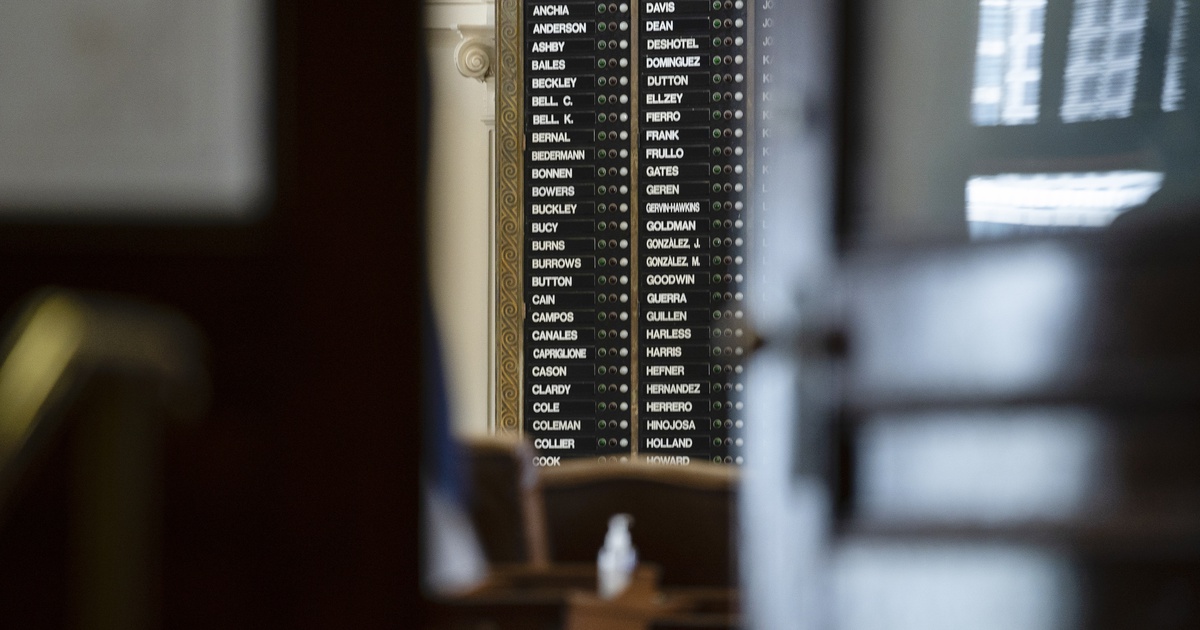 Sign up for The Brief, our daily newsletter that keeps readers up to speed on the most essential Texas news.

It is unclear when exactly the Texas House will have a quorum again, but when it does, the Democrats may return to find a less friendly chamber than the one they left weeks ago.

Their latest quorum break over Republicans’ elections bill has caused an even deeper rift in a chamber that has long prided itself on a collegial bipartisan tradition where Democrats who are the minority party have a seat at the table, with committee chairmanships and a say in some major debates.

“I can definitely tell you it’s not gonna be like nothing happened,” said state Rep. Justin Holland, R-Rockwall, predicting that when Democrats come back, “you’re not gonna see the normal handshakes, fist bumps and smiles that you would on” the first day of a session.

“There’s been some significant — if not irreparable — damage to the relationships within the body,” Holland said.

The second special session got underway Saturday — and within seconds of gaveling in, House Speaker Dade Phelan, R-Beaumont, announced that the chamber again did not have a quorum. While a couple Democrats were back from Washington, D.C. — where the group flew to in July to break quorum — most still were not in Austin, and a group of 26 have since vowed to remain in the nation’s capital to see through their fight for federal voting rights legislation.

Weary after two failed attempts to pass their priority elections bill, Republicans are fed up with Democrats’ national TV interviews suggesting they are racist for supporting the elections bill, fed up with Democrats for breaking quorum despite what they describe as good-faith compromises and fed up with having to show up to the Capitol every day, spending time away from their families and jobs, despite knowing there will be no quorum to conduct official business.

The feelings are mutual. The quorum-busting Democrats have fumed about Republicans’ attempts to push through the elections bill which they say will make it harder for marginalized Texans to vote. And they have taken offense to the aspersions cast by their colleagues in Austin who have assailed their quorum break as a luxury getaway, citing their own personal sacrifices.

But some Democrats are also hopeful for civility when enough of them return to Austin to restore quorum, even if there will first have to be a cooling-off period.

“I suspect that it’ll be a little intense at first, and hopefully we’ll be able to get back where we were before, which is just generally speaking … we get along with each other on the House floor,” said state Rep. Eddie Rodriguez of Austin, one of the 26 Democrats who announced Sunday they would remain in Washington.

Rodriguez, who was first elected in 2002, has served through quorum breaks before, and he said things “went back to normal pretty quickly” each time.

State Rep. Nicole Collier, D-Fort Worth, brushed off a question about House acrimony in a Sunday TV interview with KXAS, saying she was more concerned about issues like protecting the right to vote.

“The relationships are one thing, but making sure that we take care of the people of Texas is another, and that’s where my focus is,” said Collier, who chairs the Texas Legislative Black Caucus.

The head of the House Democratic Caucus, state Rep. Chris Turner of Grand Prairie, has said the first special session was “poisoned” from the get-go thanks to Gov. Greg Abbott’s veto of legislative funding in retaliation for House Democrats’ initial walkout over the elections bill.

Things have only gone downhill from there as the Democrats watched from Washington as their Republican colleagues have increasingly berated them over the quorum break and Phelan sought to impose punishment through more formal measures, including stripping state Rep. Joe Moody, D-El Paso, from his post as speaker pro tempore.

That move particularly stung for Democrats, many of whom have relished powerful committee chairmanships and other leadership posts in the GOP-controlled chamber that relies often on bipartisan relationships to keep business on track. Moody, who had served as speaker pro tem for the past two sessions and under two different Republican speakers, was seen as an intermediary between House leadership and members in his own caucus.

Turner called Phelan removing Moody as speaker pro tem “by far the dumbest decision he’s made,” telling WFAA in an interview that “it is simply shortsighted.” And in a joint statement, Turner and other House Democratic leaders issued a thinly veiled threat to pull their support for Phelan as speaker.

“There needs to be 76 members who decide who our next Speaker is,” the statement read, “and more than 60 are not there.”

Republicans in the House have gone so far as to call for the arrests of Democrats who absconded when they issued a “call of the House,” which can deploy law enforcement to apprehend members who are not present. During the first special session, Phelan signed an arrest warrant — albeit too late — when state Rep. Philip Cortez, a San Antonio Democrat, returned to Austin and went back to Washington days later.

Democrats responded with a lawsuit filed Friday objecting to three GOP officials’ attacks on them for breaking quorum, saying they have been “deprived of liberty for substantial periods of time, suffered much anxiety and distress over separation from their families, and much discomfort and embarrassment.”

Republicans widely mocked that lawsuit as a number of Democrats have said they did not authorize their names to be used in the suit. The latest development came Monday after a state district judge in Travis County granted a temporary restraining order blocking the arrest of any House Democrat who has broken quorum.

The flaring tensions were acknowledged Saturday when the House gaveled in to kick off the second special session, with state Rep. Jeff Leach, R-Plano, delivering an invocation asking God to “perform a miracle in our midst” and bring the chamber back together. He said lawmakers were “staring right now at a raging ocean of division and hostility in this chamber.”

“Lord, there are relationships that are shattered, cords of trust that have been broken,” Leach said, “but you, Lord, bring the dead to life and what is broken, you restore.”

Another issue that’s continued to fuel hostility is the question of whether funding for the Legislature will run out in the coming weeks after those dollars were vetoed by Abbott. The uncertainty has ensued amid finger pointing between Democrats and Republicans, with both sides blaming the other for putting the salaries and benefits of over 2,100 state employees on the line.

Abbott and other GOP state leaders said last week they would extend that funding for an additional month as a deadline to reinstate those dollars nears. In the meantime, Democrats have asked the Texas Supreme Court to override Abbott’s veto, which they argue is unconstitutional— and some member relationships have continued to fray.

Last week, state Rep. Jared Patterson, R-Frisco, complained on Twitter that one of his Democratic colleagues in Washington, state Rep. Gina Hinojosa of Austin, had just called him “trying to lecture me about calling out members of the Democratic caucus on twitter for going out of state/country while we’re in special session.” The purported call came days after it was revealed that two of the Democrats who had gone to the nation’s capital, state Reps. Julie Johnson of Farmers Branch and Jessica González of Dallas, left for vacation in Portugal.

Patterson was unapologetic, saying Hinojosa is “damn right” he will call out the vacationing lawmakers.

“I don’t know what Texas House you think you’re walking back into – but let me assure you that it’s not the one that’s going to sit idly by while you and your friends stand on the mic for four hours and call us racist just because it helps you back home,” Patterson said. “It ain’t happening.”

Hinojosa did not respond to a request for comment.

But not all Democrats are drawing their GOP colleagues’ ire in this moment. A small group of Democrats has remained in Austin throughout the quorum, and one of them, state Rep. Eddie Morales Jr. of Eagle Pass, said things continue to be friendly.

“A vast majority of my Republican colleagues have remained cordial and have come up to me on the House floor and thanked me for staying,” Morales told The Texas Tribune over the weekend. “We have exchanged pleasantries and commented that they respect my decision to fight this bill differently.”

As the quorum break has dragged on, there has been growing pressure from some corners of the GOP for House leadership to take stronger action punishing the absent Democrats.

Phelan has already demanded that they return their per-diem payments — though he cannot force them to — in addition to stripping Moody of his speaker pro tem position. But Phelan so far has resisted a more drastic measure, such as stripping Democrats of their committee chairmanships, claiming he cannot do so under chamber rules.

State Rep. Briscoe Cain, the Deer Park Republican who chairs the House Elections Committee, said Saturday there is “definitely an appetite” to strip the Democrats of their committee chairmanships, but he acknowledged uncertainty over how that would be done — for now.

“We’ll find that out shortly,” Cain said without elaborating.

Cain was speaking with reporters on the first day of the second special session. As for whether the chamber’s collegiality is “damaged irreparably,” Cain said he was not sure.

“I’m sure we can always make up and get to know each other, but is it damaged?” Cain said. “Of course it is.”

James Barragán contributed to this report.

Join us Sept. 20-25 at the 2021 Texas Tribune Festival. Tickets are on sale now for this multi-day celebration of big, bold ideas about politics, public policy and the day’s news, curated by The Texas Tribune’s award-winning journalists. Learn more.