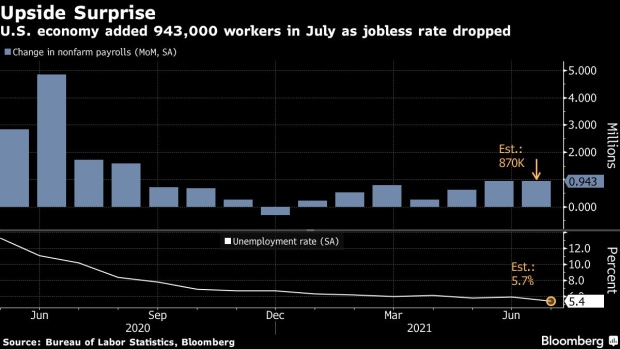 (Bloomberg) — Asian stocks are set to start the week steady after a better-than-expected increase in U.S. payrolls fueled expectations that the Federal Reserve is moving closer to a pullback of stimulus.

Futures rose in Australia, but they fell in Hong Kong earlier. Japan markets are closed for a holiday. On Friday, the S&P 500 climbed to a record, led by financials and materials, while the technology-heavy Nasdaq 100 fell. U.S. job growth accelerated in July by the most in almost a year and the unemployment rate declined, illustrating momentum in the labor market as it grapples with hiring challenges.

The U.S. 10-year Treasury yield climbed to 1.3% and the dollar strengthened against major peers. Cash Treasuries won’t trade in Asia because of the holiday in Tokyo.

The jobs report fanned expectations the central bank will start to cut back stimulus as it wrestles with inflation well above target even as the delta virus variant spreads. Dallas Fed President Robert Kaplan added to the speculation Friday, saying he’d support adjusting purchases soon but in a gradual manner. U.S. inflation data this week will be a key marker for investors trying to gauge how acute price pressures are, ahead of the Jackson Hole symposium later this month.

“Shares remain vulnerable to a short-term correction with possible triggers being the upswing in global coronavirus cases, the inflation scare and U.S. taper talk and geopolitical risks,” Shane Oliver, head of investment strategy and chief economist at AMP Capital, said in a note.

China’s inflation data this week could also provide a reason to slow the bullish momentum in its sovereign bonds’ world-beating rally.

Traders are also keeping an eye on the progress of the vote on the $550 billion U.S. infrastructure package.

On the virus front, Anthony Fauci, the U.S.’s top infectious-disease doctor, said he’s “strongly in favor” of speeding booster shots to people with weakened immune systems, a further sign of how the delta variant continues to shift the strategies for curbing the pandemic.

Elsewhere, gold fell below $1,800 after the jobs report. Bitcoin traded around $43,000 after hitting the highest since May over the weekend. Crude oil declined, capping its worst week since October on concern the delta virus strain will hamper demand growth.

Here are some key events to watch out for this week:

These are the main moves in markets: