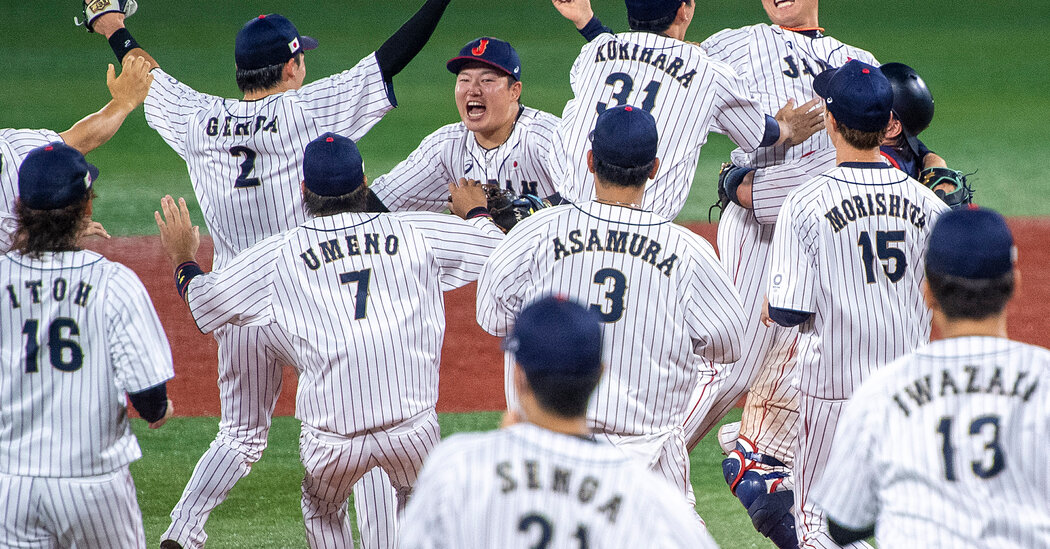 YOKOHAMA, Japan — After stepping on second base for the final out, Japan shortstop Hayato Sakamoto felt awash with a new sensation. For so long, Japan had never achieved Olympic glory in a beloved sport.

Leading into the gold medal game on Saturday at Yokohama Baseball Stadium, Sakamoto, 32, admitted he felt a lot of pressure. And before that final play, he said he was very nervous. So after securing the final out in a 2-0 win over the United States, Sakamoto jumped up and thrust his arms in the air.

“I felt so relieved,” he said through an interpreter.

The last time baseball was in the Olympics, in 2008 in Beijing, Japan failed to even win a medal. Baseball was back, only temporarily, because of the host country’s fervent love of the sport. In finally winning the top prize, the Japanese baseball team delivered arguably its signature moment of a trying and unusual Tokyo Olympics, an event postponed a year because of the coronavirus pandemic and held this summer still amid a state of emergency.

“This Olympic Games is really special because we’re the hosting country and we have the frustration from the Beijing Olympics,” said Japan Manager Atsunori Inaba, 49, a former player on that 2008 national team. “All of the players really desired gold medals.”

Japan had come close to doing so just once before — in 1996, when it settled for winning the silver medal. It claimed bronze medals in 1992 and 2004. In its sixth trip to the Olympic baseball tournament since 1992, when the sport was first officially played in the Summer Games, top-ranked Japan toppled another baseball power to emerge on top.

On a humid Saturday night, Japan showed again, as it had all tournament, what that meant. It outlasted the United States with timely hitting, defense and pitching. Masato Morishita, 23, one of the best young talents in Japan, tossed five scoreless innings and struck out five, vexing his opponents with a low 90s fastball and an array of darting breaking balls.

The cadre of Japanese relievers that followed did much of the same.

On offense, the United States threatened in multiple innings, but Japan’s pitchers wriggled out unscathed each time. “Man, did their pitchers bring it,” United States second baseman Eddy Alvarez said.

Japan finally added breathing room in the eighth inning, taking a 2-0 lead when Masataka Yoshida singled and Tetsuto Yamada scored from second base following a wild throw home from center fielder Jack Lopez. Before Yamada had sneaked his hand across home plate past a futile tag attempt, Japanese players were bouncing up and down in front of the dugout.

During the Olympics, the Japanese national baseball team was one of the host country’s most followed squads.

Although no fans were allowed inside the stadium, a sizable crowd of national team staff, Olympic volunteers and media members sat in the stands on Saturday night. And much like they had on other game days, a smattering of fans stood outside the stadium to snap photos of and welcome the Japanese players as they arrived by bus in the afternoon.

Olympic baseball is taken seriously here. The country’s top professional league, the Nippon Professional Baseball league, paused its season so that its best players could play in the Summer Games.

Major League Baseball, on the other hand, carried on and didn’t allow players on its 40-man rosters to compete in the Olympics. Still, the United States squad — made up of unemployed veterans in their late 30s and young prospects — was one of the best in the Olympic tournament.

In its two meetings with Japan during the Olympics, the United States lost by a combined three runs. With its first silver medal, the United States baseball team has now completed the medal circuit, with gold in 2000 and bronze in 1996 and 2008.

Saturday, though, marked the last chance for baseball players across the world to compete on the Olympic stage. Booted from the permanent program following the 2008 Games, Japan restored it for the Tokyo Olympics. But neither baseball nor softball will return for the 2024 Games in Paris. They are, though, widely expected to return in 2028 in Los Angeles.

After the game, Inaba said it was time to pass the baton on to the younger crop of national team players, such as Murakami. He said he hoped that what they learned at the Olympics would serve them well in other future international tournaments.

“I’m very, very happy to be able to get the gold medal,” Murakami said through an interpreter. “And I’m very proud.”

Earlier in the day, the Dominican Republic defeated the 2008 gold medal winners, South Korea, 10-6, to win a bronze medal, the first baseball medal in the country’s history.