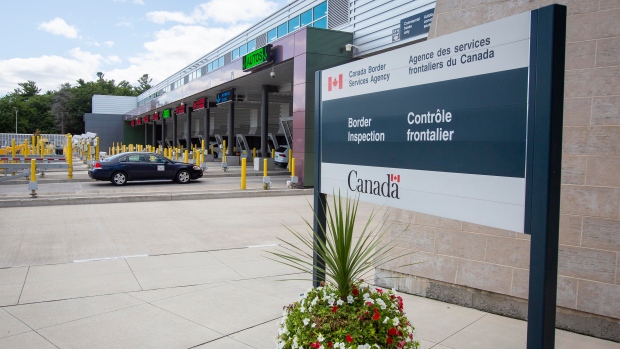 TORONTO — The federal government’s eased border restrictions are set to take effect on Monday – meaning that for the first time since March 2020, travellers from the U.S. will be allowed to enter Canada for non-essential purposes.

As of Aug. 9, American citizens and permanent residents will be allowed into Canada if they can provide proof that they’ve been fully vaccinated for at least 14 days.

However, prospective visitors will only be allowed to cross if they reside in and are travelling from the U.S. In addition, only the four vaccines approved by Health Canada (Pfizer, Moderna, AstraZeneca and Johnson & Johnson) will be considered acceptable, although U.S. health authorities haven’t approved any vaccines outside that list.

Given that there aren’t any vaccines approved for children under the age of 12 in either Canada or the U.S., unvaccinated children under 12 who are travelling with a fully vaccinated parent or guardian will also no longer need to quarantine as of Monday.

The feds are also eliminating quarantine hotels as of Monday. Previously, all travellers flying into Canada from an international destination had to quarantine at an airport hotel at their own expense for up to three days while they wait for their COVID-19 test result.

All travellers over the age of five, regardless of vaccination status, will still have to provide proof of a COVID-19 test taken prior to entering Canada. However, starting Aug 9., fully vaccinated travellers will be exempt for taking an additional COVID-19 test upon entry, unless they’ve been randomly selected to take a test.

Travellers will also be required to submit their travel information, proof of vaccination and COVID-19 test result through the ArriveCAN app or website beforehand.

Canadian border agents had also been engaged in a work-to-rule campaign on Friday, causing long lines at border crossings and airports. But hours later, the federal government reached a tentative deal with the union representing border guards, avoiding further havoc before the border reopens to Americans.

While Canada is opening its borders for U.S. travellers, the U.S. has yet to reciprocate and open the land border for Canadian travellers. The Biden administration extended the land border closure until at least Aug. 21. However, Canadians have never been restricted from flying into the U.S. during the pandemic.

Canada will also open its borders to fully vaccinated travellers from the rest of the world starting Sept. 7.

Editorial Team
18 January 2022
The number of patients in an Ontario hospital with COVID-19 rose to 4,183 on Tuesday as ICU admissions related to...

Editorial Team
18 January 2022
Executive Director of the WHO Emergencies Program Mike Ryan speaks at a news conference in Geneva, Switzerland on Feb. 6,...