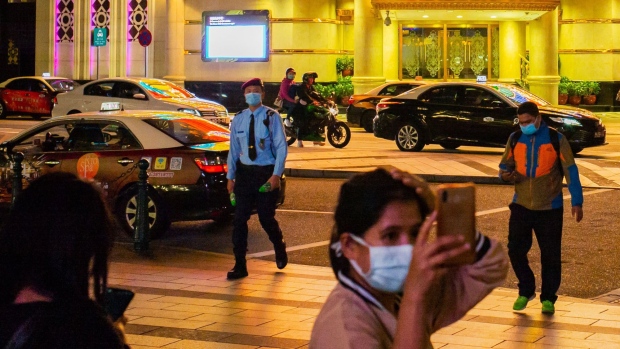 (Bloomberg) — Macau will close some entertainment and leisure venues like gyms, cinemas and bars in a bid to stamp out Covid-19 after the city reported its first cluster of local cases in more than a year, but casinos will stay open for now.

While only four infections have been detected so far, they are of the more transmissible delta strain that’s driving resurgent outbreaks around the world, prompting the government to escalate measures, test all residents and require people to have a negative result to leave the city.

The Bloomberg Intelligence gauge of Macau casino shares fell as much as 5.5% in Wednesday trading.

The government has no immediate plans to close casinos, the enclave’s lifeblood, because the venues have not been involved in any virus cases yet, said Macau Chief Executive Ho Iat-sen at a Wednesday briefing. The world’s biggest gaming hub has not shut down the gambling sector since an unprecedented 15-day closure in February 2020.

The flareup is dealing a further blow to the economy, which largely relies on gambling and tourism. Arrivals have so far only recovered to less than 10% of 2019 levels and quarantine requirements remain for many places, including Hong Kong and parts of mainland China, where most visitors come from.

The city has reported a total of just 63 confirmed cases since the pandemic began, and zero deaths. Ho said that he hoped the situation would come under control within 14 days and all the affected venues could reopen by then.

(Updates with Ho comments in the second, fourth paragraphs.)