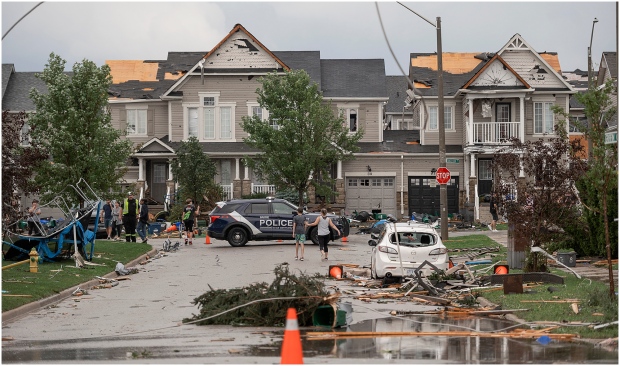 During the powerful storm, Janice Heron’s son’s car was damaged.

Heron says her son didn’t insure the vehicle because he was saving up, and she says her home insurance won’t cover the cost.

“If it’s on the property, why wouldn’t property cover vehicle damage whether or not someone has comprehensive or not,” Heron asks.

She said a man in Orangeville donated her son a car, which should be arriving in the next couple of days after she posted her story online.

The Insurance Bureau of Canada (IBC) was at the site Tuesday at Saint Gabriel’s school, helping residents through the process.

“The initial stress levels are down, and it’s like ok what happens next,” said IBC Industry and Consumer Relations, Gloria Haydock.

Her advice to residents is to take pictures and keep records and receipts while claims are being processed.

“You know that contents are going to be damaged, so start listing things,” Haydock says. “Keep an itemized list of the things you are doing to help mitigate the claim.”

While it’s hard to know how long the process could take, some insurance may cover living expenses during that time.

Meanwhile, volunteers are still going house to house collecting garbage as most of the debris is hauled away from a Barrie, Ont. neighbourhood after a tornado wreaked havoc on Thursday.

“Picked up a bunch of shingles, nails, pieces of wood, insulation, everything from all the destroyed property,” says Liam Gurton, Grade 11 student volunteer.

Gurton and his sister Emily spent the past two days cleaning up the neighbourhood.

The city said crews are done clearing the area for the most part.