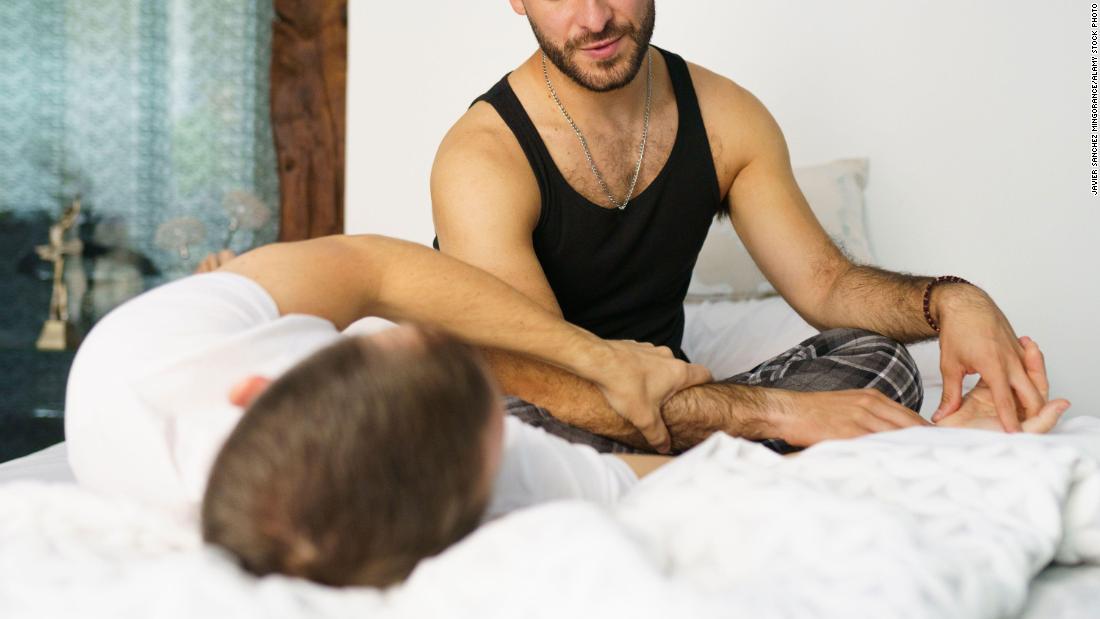 Editor’s Note: Ian Kerner is a licensed marriage and family therapist, writer and contributor on the topic of relationships for CNN. His most recent book is a guide for couples, “So Tell Me About the Last Time You Had Sex.”

Just as in a summer blockbuster, there are superheroes and supervillains of sex. The most powerful hero is arousal — the warmth we generate when we touch, the fantasy that turns us on. It’s the mechanism by which we climb the peaks of pleasure. But like a classic movie standoff, arousal often never gets a chance to shine, thanks to its nemesis: anxiety.

“Anxiety hits the soft spot of vulnerability, making it hard to be present and aroused,” explained California-based sex therapist Jean Pappalardo. “Anxiety about sex and intimacy may start as a ‘yield’ sign and eventually become a ‘stop’ sign. It can be paralyzing.”

By anxiety, therapists mean feelings of fear, nervousness, and worry that can interfere with daily life.

There are any number of reasons why you might feel anxious about or during sex, but at their core, they usually involve “spectatoring” — a sense of being more concerned about the performance of sex than the actual act of it. Spectatoring prevents us from being in the moment and letting go.

In my experience, people spectate around all sorts of concerns: Will I function the way I feel I should? Am I a good lover? Is this pleasurable for my partner? Am I meeting my partner’s expectations? How does my body look? How do I compare? Am I going to be expected to do something I’m uncomfortable with because I know my partner wants it?

These concerns can often be traced back to something in our sexual history. One woman I worked with had been told that she wasn’t a good kisser. One of my male patients was mocked for being uncircumcised. Such triggering events initially led to anxiety, which in turn impaired sexual function. Now, the anxiety itself triggers performance issues for these patients, often creating a vicious circle.

Other people may find that heightened anxiety outside the bedroom — whether the result of an anxiety disorder or life’s general stresses — can impede what goes on inside the bedroom.

“People who struggle with anxiety often have a hard time relaxing, so their ability to tune into their sexual sensations and allow arousal to happen is compromised,” said Deborah Fox, a sex therapist in Washington, DC. “They put so much energy into managing their anxiety that takes them away from enjoying themselves — including the spiciness of sex.”

How anxiety manifests in your body

Anyone who has experienced anxiety is likely familiar with its most obvious symptoms: Your heart races, you breathe more heavily, you experience “butterflies in the stomach,” which often show up as digestive woes. Chronic anxiety can be more insidious, making itself known in the form of irritability, depression and low libido. It can affect sexual arousal and function in other ways, too.

“For people with penises, anxiety can affect blood flow leading to the inability to achieve or maintain an erection,” said sex therapist Kristen Lilla, who practices in Nebraska, Iowa and Wisconsin. “For people with vaginas, anxiety can cause you to tense, tightening the vaginal muscles, and upon penetration can cause pain. It may also cause you to struggle with orgasm.”

In the moment, anxiety can hijack your body and mind in ways that stop you from being in the flow of sex. Many of my male patients have so-called psychological erectile unpredictability, meaning it only happens during partnered sex. Men with this problem tell me they’re afraid of it happening again and that fear spirals, leading to panic during sex, which releases the stress hormone adrenaline and redirects of the blood away from the genitals. In short, the anxiety around impairment of sexual function leads to the actual occurrence of the function.

It’s this link to adrenaline that has led urologist Dr. Paul Gittens, one of the nation’s leading sexual medicine physicians, to urge a shift in the way we view — and label — erectile issues.

Whatever the cause of sexual anxiety, there are ways to address it — and to have a fulfilling sex life.

People with anxiety around sex tend to use avoidance as a coping mechanism. But this approach only compounds the issue. “Outside of the bedroom, sexual anxiety puts a lot of stress on the relationship. It can creep into other parts of the relationship, and suddenly you are fighting about things you don’t normally fight about,” said Pappalardo.

One of my patients worries he’ll lose his erection during sex or won’t be able to finish. He worries so much about it that he avoids initiating sex and even holding hands or telling his girlfriend she looks pretty because he’s terrified that she’ll interpret it as an invitation to have sex.

As a result, his girlfriend feels undesired, which is actually far from the case — he desires her all the time. He just believes that the sex is doomed to fail. And because he thinks talking about sex is inherently shameful, he never tells her the real reason he’s not approaching her.

Lots of people find talking about sex uncomfortable, but communication is key — and seeing a professional may help facilitate those conversations.

“When couples come to me with anxiety, I tell them to speak about what happened in their lovemaking session outside of it; there is often less charge outside the bedroom,” said sex therapist Tara Galeano, founder of Colorado’s Boulder Sex Therapy. “I ask them to agree on what they will do when one or both experience anxiety, make a plan, and write it down.”

Stay in the moment

Simply put, mindfulness means being in the moment without judgment.

“Mindfulness is the perfect counter to sexual anxiety since it thwarts worries about impending ills by inviting you to become fully present in the here and now,” explained sexologist and professor Yvonne Fulbright. “Rather than thinking that there’s a right or wrong way to feel or think at any given moment, you practice acceptance in this state of simply being, ultimately lowering stress levels. Instead of being preoccupied with the past or future, your awareness is dedicated to simply being ‘there.’”

One way to foster mindfulness it to practice breathing exercises as a part of foreplay, said Fulbright: Inhale for four counts, hold for four counts, and exhale for six counts. “Doing so helps lovers to transition from their busy lives to a more enjoyable, easygoing space, and bring attention to the moment.”

Focusing on the sensations in your body can also help.

“When you pay attention to something, you are recruiting the cortex, the part of our brain associated with thinking and processing information, which doesn’t sound or feel very sexy,” said sex therapist Joanne Bagshaw, who teaches at Montgomery College in Maryland. “But when you shift your attention to the sensations in your body, you’re able to experience these sensations without judgement, because you’re recruiting a different part of your brain.”

If you find yourself overthinking during sex, try fantasizing about sex while having it. Focusing on your fantasy and the sensations within your fantasy will help you stay out of your head and in your body during sex.

Take the pressure off

Don’t worry about an erection or orgasm — consider even taking that off the table completely for a while. “When you are focused on either or both, it makes it less likely that you will actually get an erection or have an orgasm,” said Florida-based sex therapist Rachel Needle. “While I am a big fan of the orgasm, great sex doesn’t have to involve having one.”

Don’t let anxiety overtake arousal. With some work, you can ensure that your sex life has a happy ending.

Inanxiety, mental health
6 Minerals and Vitamins for Fatigue You Might Be Missing Out On  Livestrong
Export Manager – Vitamins and Minerals (Nutrition)- Manchester - £30K - £40K  Cosmetics Business
These gummy vitamins include adaptogenic mushrooms for a healthier life  New York Post