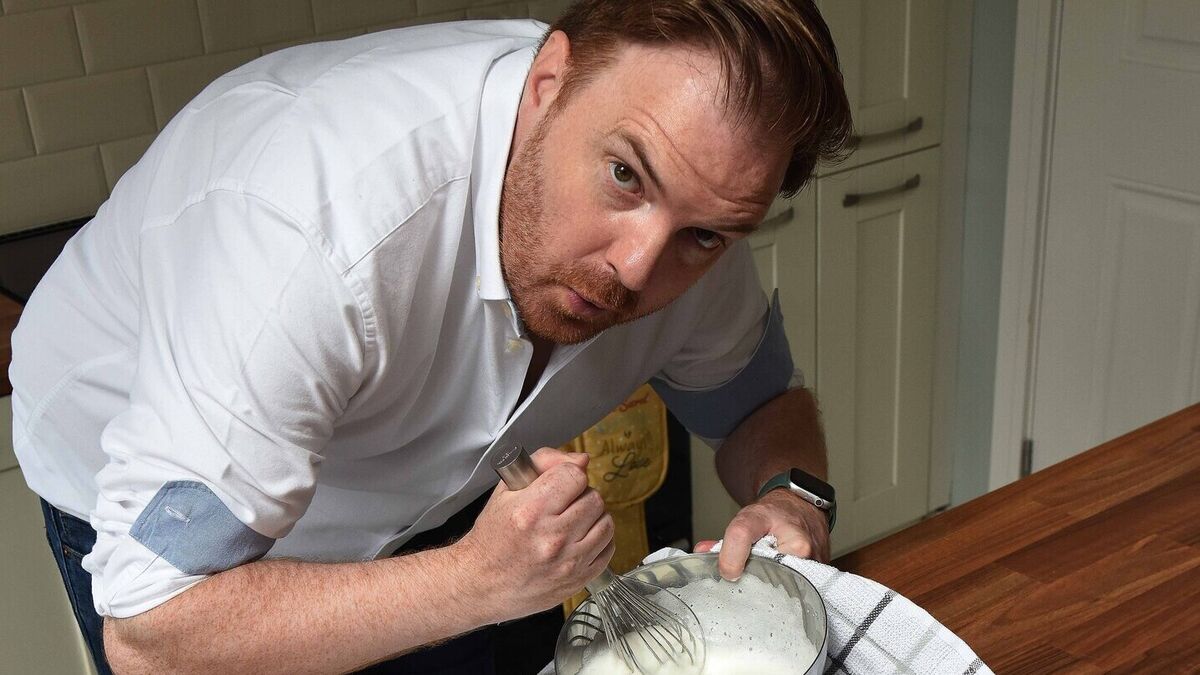 Everything is in the cloud these days. From your personal information and documents to your photos, it’s all up there. Ironically, thousands of gigabytes of cloud space are being taken up by videos of people baking “cloud bread”. But what magical ingredient does it contain to make a 42-year-old grumpy man try his hand at this very viral recipe?

Cloud bread is a light aerated sweet bread that had me completely and utterly besotted from the first time I saw someone on Instagram pull apart a big cloud of bright blue steamy yumminess.

It’s also called TikTok bread such is the volume of content given to this fluffy phenomenon on that platform. However, its origins seem to come from a food craze twenty years ago and was not originated by new content crunching millennials.

It is essentially, as my mother pointed out, a soft meringue. It’s easy to bake – you just whip up egg whites, add sugar and cornflour, mould it into the shape you want, bang it in a cool oven for half an hour and hey presto, you have cloud bread happiness.

The success of the viral videos is mostly down to the colours the bread can take. Adding neon food colouring to it can turn something that is very plain into an addictive eye-catching substance.  There is some debate that it actually originated from one of the most controversial diets of the last three decades -The Atkins Diet. It’s also called “keto bread” due its lack of obvious carbohydrates and the “keto” variety is often made with cream cheese or another form of dairy.  All this food history and recipe variation is fine but what I want to know is: Why did I feel completely compelled to make it?

I understand that influencers have influence over our purchases, that’s obvious, and after recently finishing a digital marketing course I was startled to learn just how unbelievably sophisticated online retailers have become.  But food crazes existed long before social media, the internet, and even newspapers. There has always been interest in exotic edibles.

In the 1700’s in London you could rent a pineapple. They were so rare that only the mega rich could afford to eat them. We, as a human race, have gone to war over everything from nutmeg to spices and, more recently, the invention of bicarbonate of soda by pharmacist Valentin Rose in 1801, revolutionised the Irish diet. It was, in its time, the must-have ingredient.

Food and its constant transformation and innovation of recipes have always grasped our attention. But normally I would have no interest in baking cloud bread. So what made me walk into the supermarket buy eggs, corn starch, food colouring and sugar?

For instance, I follow Nevin Maguire on Instagram. I’ve made loads of his recipes, from curries to stews, and I recently made his hassle-free ice-cream. Those were, however, for family consumption and nourishment. This is different. I don’t even like the taste of cloud bread.

The answer may lie in a physiological concept called “Random Reinforcement” that when applied to social media and especially TikTok and Instagram, makes the user consistently choose random outcomes that visually give them a kick of pleasure releasing dopamine into the brain.  Cloud Bread videos are perfect for this as they are generally very quick hits of 15 seconds.

You see one and, almost like a fruit machine, flick up to see what the next video will give you. This is how you can spend literally hours on your phone without realising it. It’s like I’m gambling guilt-free, losing no money, just time.  But I think there may be another answer. What if all this social media marketing that I gain pleasure from fuses my Hedonic and Eudaimonic happiness together?

From dalgona coffee to banana bread to, you’ve guessed it, cloud bread, I get a quick hedonic hit from seeing these foods being made on social media but I’m not satisfied with that level of “happiness”. I’m only happy if I can actually make them myself. So, I go to the shop, come home, make the recipes and present them to my family who have little, or absolutely no, interest.

It’s probably the reason I dislocated my jaw while cycling my BMX bike off the garage roof when I was 6 trying to replicate Evil Knievel. It’s more than likely the reason  I convinced myself to do a litany of stupid things from trying to make my own deodorant, thinking I could dance on live telly, to losing weight by purely just drinking apple cider vinegar for a week. The aviation videos I’m addicted to watching are definitely the reason I ask every pilot I see if I can fly the plane.

My brain, regardless of the perils, will always tell me “sure, I can do that” once I watch anything that interests me, even if I possess absolutely no ability whatsoever to do so. It’s not confidence, it’s a self-evidently a complete lack of self-awareness.

Thankfully, it’s just cloud bread videos for now. However, I’m currently watching a lot of content about the hadron collider, so if the universe collapses in on itself by the time this goes to publication I apologise, it was probably me.

When it comes to diet trends, what’s old is new again. For proof, chew on this piece of information: A...

LOUISVILLE, Ky. — 2021 is a year filled with change. Changing years, changing grades, and for most children changing from...

Although a high body mass index (BMI) has been found to improve survival outcomes among patients with non-small cell lung...