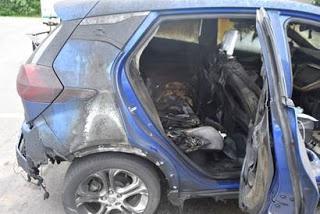 “Don’t park your car in the garage” is the latest message from General Motors for Chevy Bolt owners.

This would be comical if it wasn’t so serious. The official GM statement for owners of 2017-2019 model year Chevy Bolts is:

“Out of an abundance of caution, we are asking owners of 2017-2019 Chevrolet Bolt EVs who were part of the recall population to park their vehicles outdoors immediately after charging and not leave their vehicles charging overnight while we investigate these incidents.” —General Motors (July 14, 2021)

More to the point, never park your Bolt in the garage. “We’re asking customers to park their vehicles outside regardless of whether they are charging or not,” a GM spokesperson told me.

This comes in the wake of two recent Chevy Bolt fire incidents (one detailed here) and a general recall of nearly 69,000 Bolt EVs in November due to fire risk .

One of the biggest concerns is that it’s not clear what exactly causes, or triggers, the fires.

The ChevyBolt.org forum has lit up with posts from anxious owners. For example:

—One (speculative) post suggests that the next warning from GM will be: don’t drive the vehicles at all.

—Some owners point out that the long-awaited fix did not actually fix the battery issue.

—Some wonder what to do in the case of a fire.

—Some now hope that GM will buy back their Bolt.

GM is in fact buying back Bolts. I have a friend in the San Francisco Bay Area who will be getting a full refund for a 2019 Bolt. He is scheduled to return the Bolt to the dealership next week when he will be handed a check.

And owners are right to be concerned about the fix. It has apparently not been adequate since the Bolts that caught fire had received the software fix.

One owner, who has been parking his Bolt outside for two months, told me that the risk is just too high to keep it in the garage.

I drive a 2018 Chevy Bolt. I no longer charge my Bolt at home — which is a big change because I previously (and very conveniently) did 90 percent+ of my charging at home.

Now, on top of that, I have the anxiety of parking the car in the garage.

And this comes after my Bolt sat at the dealer for 2.5 months due to a battery problem. I was told that it was “fixed” (which included the software update).

That fix is now moot, however, because of the latest advisory from GM.

Comments or suggestions can be sent to me via a direct twitter message at twitter.com/mbrookec.

Inanxiety, mental health
6 Minerals and Vitamins for Fatigue You Might Be Missing Out On  Livestrong
Export Manager – Vitamins and Minerals (Nutrition)- Manchester - £30K - £40K  Cosmetics Business
These gummy vitamins include adaptogenic mushrooms for a healthier life  New York Post