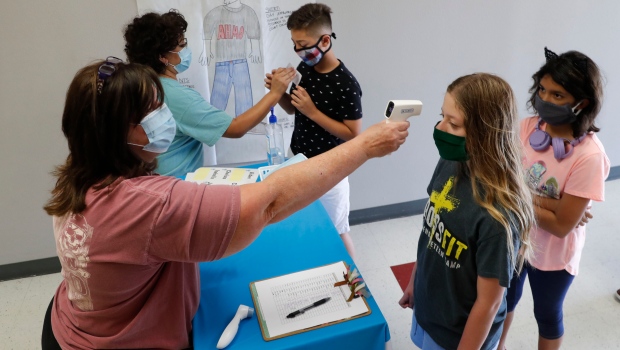 CARLETON-SUR-MER, QUE. — A new U.K. study has found that children who are hospitalized with COVID-19 are significantly more likely than adults to develop rare neurological disorders.

The study, “Neurological manifestations of SARS-CoV-2 infection in hospitalised children and adolescents in the UK: a prospective national cohort study,” looked at 1,334 children and adolescents in England under the age of 18 who were hospitalized with COVID-19 between April 2020 and February 2021. It was led by researchers at the University of Liverpool, and published in The Lancet Child and Adolescent Health on Wednesday.

Within the cohort of 52 children, there were 25 who also developed pediatric inflammatory multisystem syndrome temporally associated with SARS-CoV-2, more commonly known as MIS-C or multisystem inflammatory syndrome. MIS-C is a rare but dangerous condition that leads to inflammations in various parts of the body and has mostly been observed in school-aged children hospitalized with COVID-19.

The researchers found that the 25 children with MIS-C were more likely to have multiple severe neurological complications, such as stroke, behavioural change, hallucinations and encephalopathy, a term that refers to brain damage or disease. They were also more likely to require intensive care, compared to the children with neurological complications who didn’t have MIS-C.

“Many of the children identified were very unwell,” said co-senior author Dr. Rachel Kneen in a news release. “Whilst they had a low risk of death, half needed intensive care support and a third had neurological disability identified. Many were given complex medication and treatments, often aimed at controlling their own immune system.”

On the other hand, the children who were found to have had neurological complications without MIS-C tended to have seizures, brain inflammation, psychosis and Guillain-Barré syndrome, a nerve disorder that causes muscle weakness and prickling sensations in the hands and feet.

Race was found to be another risk factor for neurological complications. Out of the 52 children in the study with neurological complications, 20 were Black and 16 were Asian, representing more than two thirds of the cohort. Black and Asian children were also likelier to be diagnosed with MIS-C and experience the more severe symptoms. In the MIS-C cohort, 14 children, or 56 per cent, were Black and 8 children, or 32 per cent, were Asian.

There were also eight children who only exhibited the neurological symptoms and were only found to have had COVID-19 after a PCR test because they were otherwise asymptomatic.

Researchers said this underscores the importance of testing for the virus in all children hospitalized for neurological disorders.

The short-term outcomes for the children with neurological complications appear to be mostly positive. After one to six months, the researchers conducted a follow up with all of the patients in the study and found that 65 per cent had recovered well with no ongoing symptoms, although 33 per cent still had some degree of neurological disability. One child, who was a part of the MIS-C cohort, had died.

“Now we appreciate the capacity for COVID-19 to cause a wide range of brain complications in those children who are hospitalised with this disease, with the potential to cause life-long disability, we desperately need research to understand the immune mechanisms which drive this,” said co-senior author Dr. Benedict Michael.

A worker extracts a sample of molten metal during a government organised tour at a Tiangong International plant, makers of...

Dr. Anthony Fauci warned Sunday that more "pain and suffering" is on the horizon in the U.S. as COVID-19 cases...

TORONTO -- After federal COVID-19 modelling showed that the fall could bring about yet another surge in COVID-19 cases with...

EDMONTON -- As Canadians begin to embrace a return to normalcy, many are considering the exciting prospect of travelling once...

People exit the headquarters of the U.S. Securities and Exchange Commission (SEC) in Washington, D.C., May 12, 2021.Andrew Kelly |...