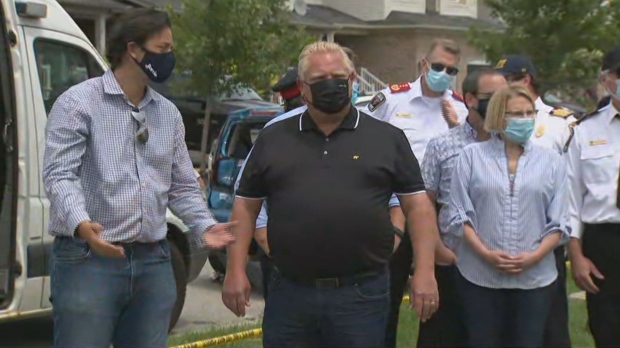 BARRIE, ONT. — Premier Doug Ford toured the damage in Barrie, Ont., one day after an EF-2 tornado ravaged a southeast neighbourhood and called the destruction “shocking.”

“This is absolutely, of course, heart-wrenching, but devastating. Just thank God no one was killed. It’s an absolute miracle,” he said.

The powerful storm produced winds of 210 km/h and left a trail of devastation roughly five kilometres long and up to 100 metres wide.

Barrie Mayor Jeff Lehman said more than 100 people were displaced by the tornado that caused structural damage to roughly 20 to 25 houses.

The premier told residents the province would “step in and help” if the insurance companies wouldn’t cover the recovery costs.

“We’re going to pull out all the stops, whatever it takes, we’re going to get people supported any way we can,” Ford added.

On Friday, the Insurance Bureau of Canada (IBC) issued a news release following Thursday’s events in Barrie, stating residents should start contacting their insurance companies to start the claims process.

The agency noted that every insurance policy is different, and most damage caused to homes by a tornado is “usually covered.”

The IBC advised taking pictures of damage, calling an insurance representative, and keeping detailed notes and receipts related to cleanup.