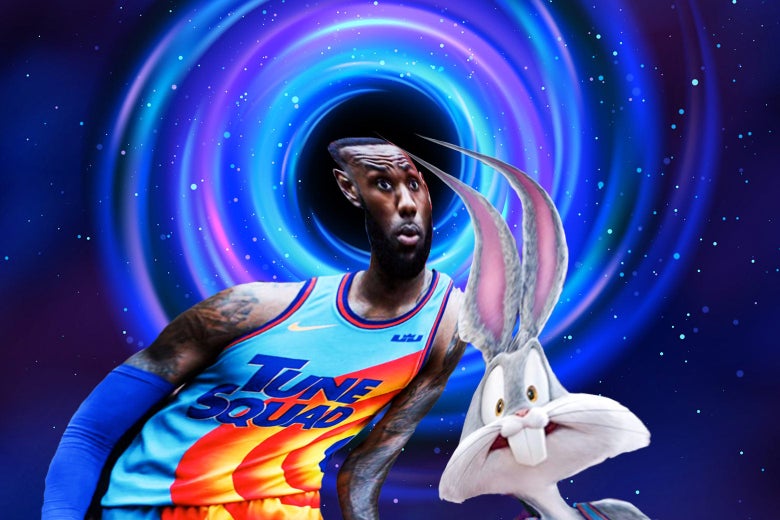 What is this? And why is this?

Times are a changin’ — @SBD is opening prop bets for “Space Jam: A New Legacy.”

Well, it’s a sports business writer noting that a company called SportsBettingDime.com is announcing “propositional bets,” or bets that don’t have to do with the overall outcome of an athletic contest—or a real athletic contest, I guess—for the basketball game depicted in the film popularly referred to as Space Jam 2, starring LeBron James, which was released Friday.

The why is a longer story.

Looney Tunes was a largely delightful series of short animated stories that the Warner Bros. studio produced for several decades beginning in 1930. Basketball was a sport invented by a Canadian working at a college in Massachusetts in 1891. Synergy is a scientific (and, apparently, theological) concept that refers to two things combining in a way that’s greater than (and different from) the sum of their parts.

In the 1990s, the most famous basketball player in the world was a Chicago Bulls guard named Michael Jordan, synergy was a popular business concept, and the production of short television advertisements was one of the most lucrative creative endeavors in the world. An advertising executive working with the sports apparel company Nike had the idea to create a TV commercial in which Michael Jordan played basketball with the Looney Tunes character Bugs Bunny. This commercial was considered very “buzzy” and successful at the time, and Warner Bros. then “developed” the idea of basketball players playing basketball with cartoon characters into a feature-length film called Space Jam. The movie was released in 1996 to generally poor reviews but did fairly well at the box office, grossing about $250 million to end as the 10th most financially successful film of the year. Jerry Maguire was ninth. (Show me the money! Ha-ha.)

The years passed—slowly, but somehow also in the blink of an eye. American entertainment companies taking advantage of a lax regulatory environment merged into increasingly large conglomerates. The success of movies about comic book superheroes drove these megacorporations’ interest in acquiring and reusing “IP”—intellectual property, or in layperson’s terms the legal right to produce new works using old characters—under the theory that entertainment commodities involving material audiences are familiar with are less risky investments than the creation of new characters and stories. A basketball player named LeBron James became his sport’s best player and most famous figure, while “startup” media companies like BuzzFeed built audiences and attracted investors by hiring cheap young writers to produce material that commented upon cultural works and news events created or originally reported by others, a strategy that maximized readership without requiring major investments in production or newsgathering. One editorial avenue pursued by such companies was the repeated and only slightly iterative celebration and discussion of cultural works that had not previously been considered particularly important or successful, a trend that combined synergistically, one might say, with the trend of recycling film and television IP and ballooned into a culture-consuming pattern of recursive short-term nostalgia. Finally, public officials and legislators, frantic to promote new industries in a post-manufacturing economy that perpetually feels like a house of cards, legalized online gambling, which is kind of literally a house of cards.

So that, basically, is how you achieve the cultural ouroboros singularity of a gambling website inviting Americans to wager on a pretend basketball game depicted in a recycled-IP commodity created and distributed by the phone company. The twist? SportsBettingDime.com doesn’t actually take bets; it’s a site that arranges generic editorial content around advertisements for actual sports books, which means—as appears to be acknowledged by the fine print at the bottom of its homepage—there was never actually any way to bet on its Space Jam: A New Legacy odds. In fact, as far as I can determine, these odds never appeared on an actual website—only on the Twitter account of Anthony Puccio, who writes an NBA newsletter for something called Front Office Sports, a media entity that recently announced a partnership with the (actual) gambling company DraftKings. How about that?

Also, guess who was (briefly) the editor of the BuzzFeed sports section? Me! Put me in the black hole.