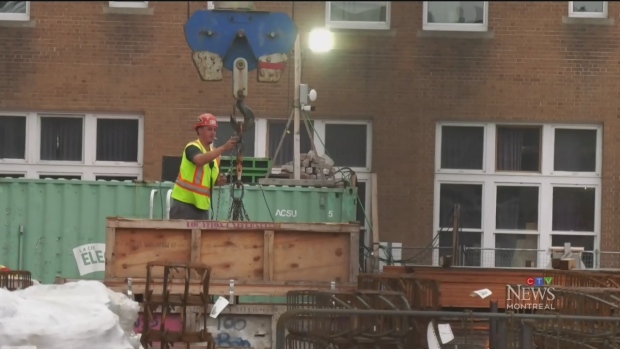 MONTREAL — Close to 200,000 Quebec construction workers are on holiday as of Friday.

The industry all but shuts down for two weeks, and after a very tough year because of the COVID-19 pandemic, it can’t come a moment too soon.

In downtown Montreal, the sounds of jack-hammers and generators mean big projects are on the go, but many construction sites have fallen quiet on Friday for 14 days.

After months of hard work, this downtime for most construction workers doesn’t come a moment too soon. “On part tout en vacance (We’re going on vacation)!” calls out one worker as he punches out of the job for his vacation.

“C’est si physique et beaucoup mental,” explains another as to why he needs a break.

“Since most worksites open at 6 a.m., these people work long days. It’s been an exceptional year in the industry,” said corporation des entrepreneurs generaux du Quebec CEO Eric Côté. “Construction workers and everyone in the industry need a summer break and everybody has worked hard and it was a level of difficulty this year to add with the pandemic; problems with the supply chain, with the materials and a lot of activity because we’ve been more active than the year before and the year before that.”

He called 2021 a historic year for construction in Quebec. Often, time off the job means time on the road.

“There will be an operation that will be made by police officers on the roads and they will look at speeds and they will look at drivers that don’t wear their seatbelt, as well as drivers that are using the cell phone while driving and, of course, driving under the influence of alcohol, drugs or the mix of both will be looked at for sure,” she said. “These are the 4 causes of collisions and deadly collisions.”

Last year, during the construction holiday there were eight deadly collisions on Quebec’s roads and she urges people to stay safe no matter how they spend their time off.

One worker said he’s not going anywhere for vacation, although he’d love to go back to Italy.

With the pandemic restrictions, however, he’ll stay in La Belle Province this Summer, again.

Like so many in his trade, vacation will be spent close to home.