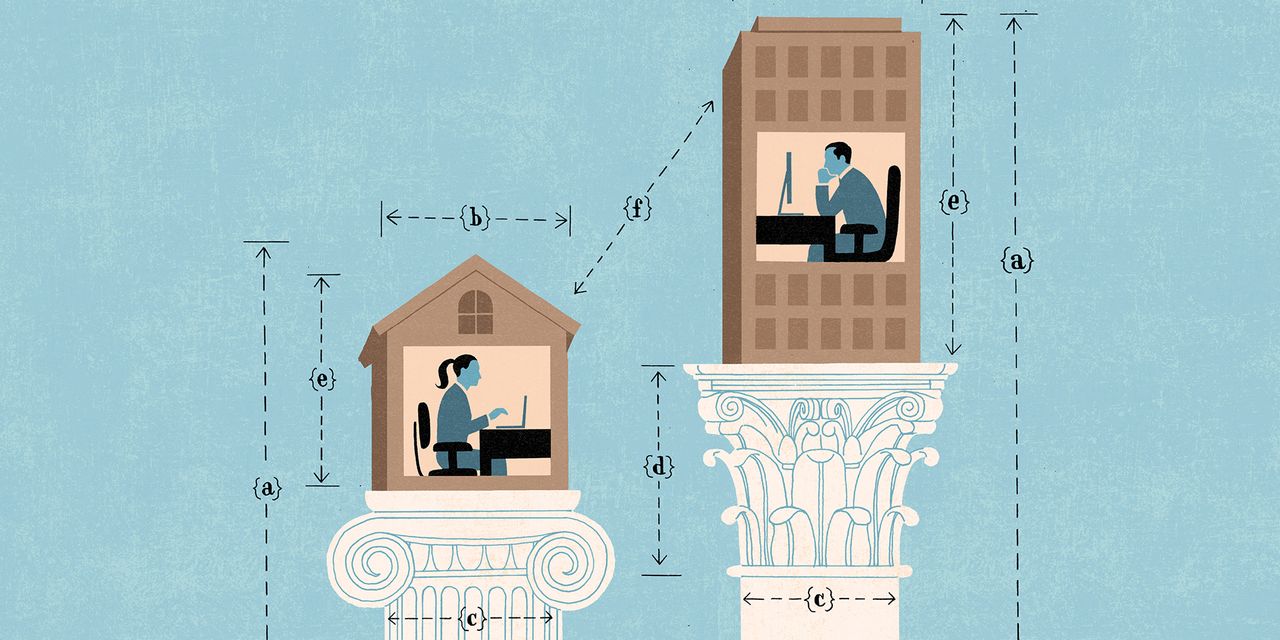 The playing field at work is shifting.

For more than a year, remote employees at many firms were in good company: Everyone was at home. Now, some colleagues are returning to the office five days a week. Others are testing out a hybrid schedule, or opting not to go back at all. If you’re the one leaning into flexibility, how do you make sure you’re not unintentionally leaning out of your career? And what happens if certain subsets of the workforce, like mothers, are less likely to return to the office?

Many of us have been dutifully plugging away from home, trading time in transit for longer work hours, office coffee breaks for boosted productivity.

But the boss might not see it that way. Managers consistently label in-office workers higher performers and give them bigger raises and promotions, Mr. Kropp says, even though data shows there’s really no difference between the two groups. If anything, remote workers perform slightly better and are more engaged, he says.

A January Gartner survey of 4,258 employees found that 43% of remote workers and 49% of hybrid workers were highly engaged, compared with 35% of on-site workers. Still, many bosses assume off-site employees are doing less.

Get ahead and stay informed about careers, business, management and leadership.

“There’s still this belief that a lot of senior leaders have which is, ‘I want them in person,’ ” Mr. Kropp says. “It’s not founded in science or data. It’s all founded in personal belief and personal experience.”

Nearly 60% of 581 professionals surveyed by search firm Korn Ferry in April said that it would hurt their career advancement if they admitted to the boss they’d rather keep working remotely.

But given the choice, many employees still want to—especially parents. A McKinsey & Co. survey, conducted in December and January with 5,043 employees, found that employees without children under 18 were nearly three times as likely to prefer on-site work. A January survey from Gartner found some differences by gender, too: 26% of female caretakers preferred to be fully remote, compared with 18% of male caretakers.

“Without intervention, what’s likely to happen is those gender wage gaps are likely to get worse, not better,” Mr. Kropp says. A missed promotion and raise now can snowball in a few years. Companies should start analyzing compensation of home workers and office workers the same way many now examine pay by gender, Mr. Kropp says, to ensure disparities don’t emerge or widen.

Lisa Ervin initially thought increased flexibility sparked by the pandemic would be good for young working mothers, who might be less likely to drop out of the workforce if they could be home when their kids got off the bus or throw in a load of laundry during their lunch break. (Women tend to carry more of the household burden than men.) But now Ms. Ervin, the senior manager of total rewards for an animal-nutrition company in the St. Louis area, worries women might find themselves unable to climb in organizations if everyone else is heading back to the office.

“Are they collaborating without her?” she wonders about her daughter-in-law and other young moms working remotely. “Are they really going to have a video call every time they need to meet and discuss things?”

Some working parents of both genders told me they know going remote is a risk—and they’re OK with that. Jessamyn Edwards, a product designer with a tech company, described moving from a cramped two-bedroom apartment in Mountain View, Calif., last March to a house in rural Spring Grove, Va., as a revelation. She can easily breast-feed her youngest daughter during the day, and is close to her parents and nature. She took our call outside, noting when a snake slithered past.

“I know the remote part isn’t going to help me, but I’m willing to sacrifice it right now,” she says.

The 43-year-old has adjusted her work style to try to make up for the fact that she’s now across the country. She likens herself to a court transcriptionist, recording every scrap of feedback and stray action item during meetings. A meticulous labeling and filing system ensures nothing falls through the cracks.

“I want them to feel that reassurance that I’m not just off doing whatever,” she says. “I’m somebody you can count on.”

Which work setup has worked best for you: fully at home, fully at your workplace or a hybrid of the two? Join the conversation below.

Joy Lin, a career coach based in Los Angeles, says remote workers must be more direct about their career goals and accomplishments, since bosses aren’t just going to pick up on those things by osmosis from the next desk over. Don’t gloat, but don’t be shy about mentioning the obstacles you overcame to persevere with a project.

“You become known as a problem-solver,” she says.

Some companies are testing out initiatives aimed at keeping everyone equal. Citrix, which makes software for remote work, has long offered some employees location flexibility. But being remote came with disadvantages, says Traci Palmer, the company’s vice president of people and organization capability.

“Those individuals who were remote, they’d be left out of sidebar conversations,” she says. “Meeting’s over and by the way, they keep talking, and decisions are made.”

She would know. After moving to Reno, Nev., to help care for her mother a few years ago, Ms. Palmer found herself unable to get a word in during a virtual meeting with staffers at the firm’s Fort Lauderdale, Fla., headquarters. She also noticed that remote employees were often skipped over when it came time to assign big new projects.

“The thought is, ‘Oh, they’re remote. I’m not sure they’re going to be able to do that, since they can’t be in person,’ ” she says.

As Citrix transitions to a hybrid model this summer, it’s rolling out an internal application that teams will use to set rules around things like decision-making and meeting etiquette. The hope is that workers will build team contracts—everyone has to sign off on the agreements—that put remote and in-person workers on equal footing.

For example, the company’s Costa Rica-based customer-service team, which piloted the app this spring, opted to always begin meetings by calling on remote participants first to ensure they have a chance to speak. Other groups might require all employees to turn on their own camera for meetings, even if some folks are in a conference room together.

The goal is to avoid regressing to pre-pandemic norms, Ms. Palmer says.

“How are we going to make sure everyone has a voice?” she asks. “For once in our life we were all equal.”

How remote employees can make sure they’re not forgotten—and how bosses can keep things equal, according to career and human resources experts.

* Establish an in-office ally on your team, someone who will remind the group to dial you in when impromptu decisions start being made.

* Stay in the flow. Catch up with colleagues and keep your boss abreast of your agenda and accomplishments.

* If you’re interviewing for a new job and want to work remotely, ask which senior leaders work from home. That will give you a sense of whether the company really values flexible work, and what career paths are possible without coming into the office.

* Analyze pay and promotions in your department to ensure you don’t have a gap between remote and in-office workers.

* Let tech help you. Some companies are experimenting with covering meeting room walls with 36-inch screens, so everyone dialing in appears life-size.

A Facebook logo is displayed on a smartphone in this illustration taken January 6, 2020. REUTERS/Dado Ruvic/File PhotoJuly 26 (Reuters)...
Ontario has asked the federal government to ensure Canadians who received mixed COVID-19 vaccines will be cleared for international travel...
This content is only available to USA TODAY subscribers.Subscribe for as low as $4.99 per month.Subscribe NowYour subscription includes access...