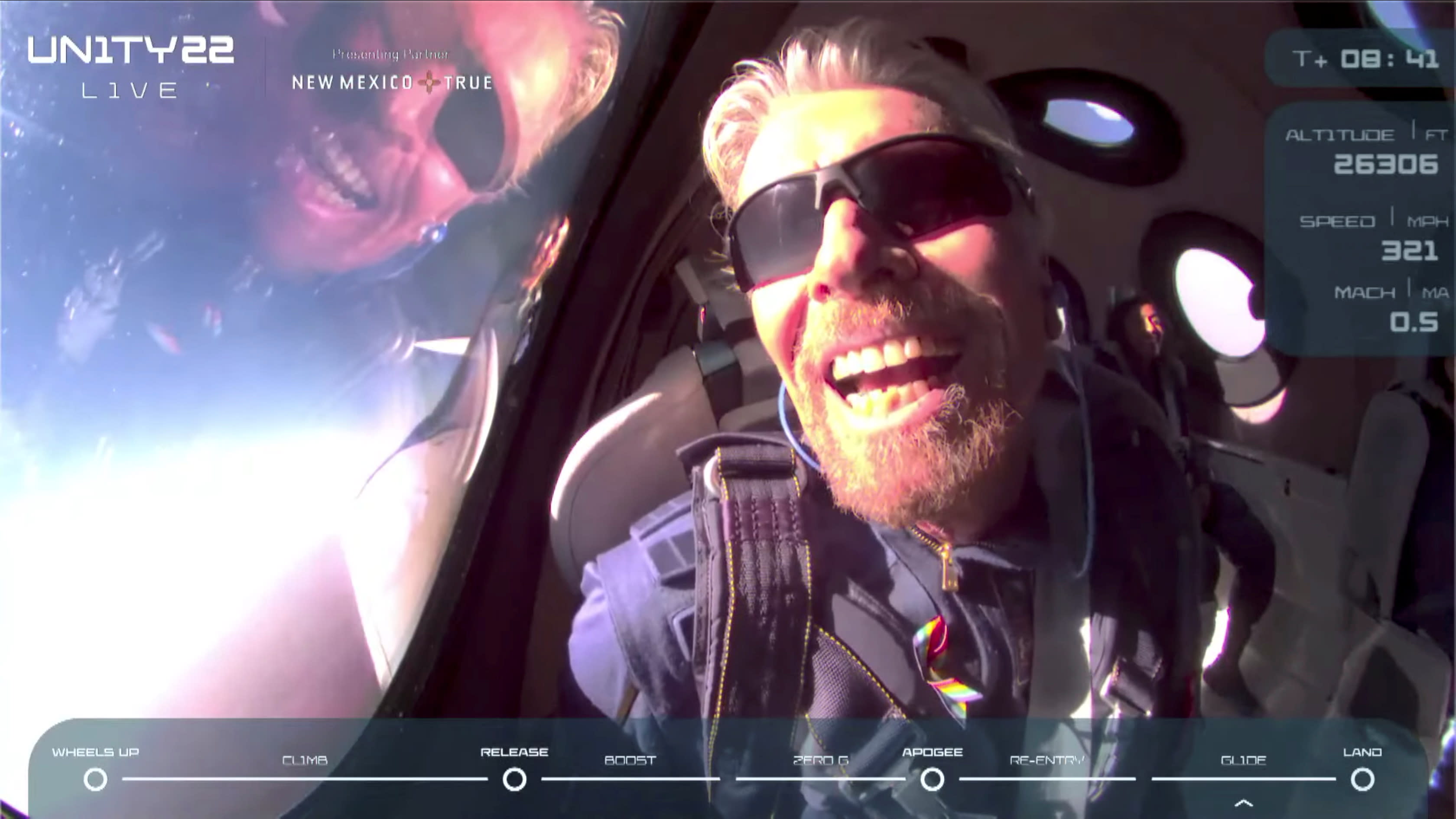 Sir Richard Branson, after nearly 17 years of development and over a billion of dollars invested in Virgin Galactic, achieved his dream and reached space.

Speaking from the spacecraft’s cabin, Branson called the spaceflight the “complete experience of a lifetime.”

“I have dreamt of this moment since I was a kid, and honestly nothing could prepare you for the view of Earth from space,” Branson said after landing.

The company’s spacecraft VSS Unity launched above the skies of New Mexico on Sunday, with two pilots guiding the vehicle carrying the billionaire founder and three Virgin Galactic employees. VSS Unity – after being released by a carrier aircraft called VMS Eve above 40,000 feet – fired its rocket engine and accelerated to faster than three times the speed of sound in a climb to the edge of space.

VSS Unity then performed a slow backflip in microgravity, when the Virgin Galactic crew was weightless and floated around the spacecraft cabin. The spacecraft reached an altitude of 86.1 kilometers (53.5 miles, or about 282,000 feet).

The vehicle then returned through the atmosphere in a glide, to land back at the runway of Spaceport America where it took off from earlier.

VSS Unity is released from carrier aircraft VMS Eve during the launch of its third spaceflight on May 22, 2021.

The U.S. officially considers pilots who have flown above 80 kilometers (or about 262,000 feet) to be astronauts.

VSS Unity is designed to hold up to six passengers along with the two pilots. The company has about 600 reservations for tickets on future flights, sold at prices between $200,000 and $250,000 each.

“We’re here to make space more accessible to all at all,” Branson said after the flight. “The mission statement that I wrote inside my spacesuit was to turn the dream of space travel into a reality for my grandchildren … and for many people who are alive today, for everybody.”

This was the fourth spaceflight to date for Virgin Galactic, its second so far this year, and the first carrying more than one passenger.

In addition to flying Branson, the spaceflight featured other goals, as Virgin Galactic is still testing its spacecraft system, aiming to begin commercial service in early 2022.

The four crew members are testing the spacecraft’s cabin and the training program Virgin Galactic has developed, to ensure it properly prepares customers for the experience. Additionally, Bandla will test out performing a research experiment, as she is performing an exercise with plants in test tubes for the University of Florida.

Sunday’s spaceflight is one of three remaining for Virgin Galactic to finish development, with two more expected this year.

A sweepstakes for others

“You have a chance to go to space,” Branson said.

The sweepstakes requires a donation, which goes to a non-profit called Space For Humanity. The billionaire added that he will put on his “Willy Wonka hat” to give the winners a guided tour of Spaceport America.

Virgin Galactic’s Richard Branson, front center, gathers with Virgin Galactic employees in front of the new SpaceShip Two VSS Unity after a roll-out ceremony of the new aircraft at the Mojave Air and Space Port on February 19, 2016 in Mojave, Ca.

Branson has dreamed of going to space since watching the Apollo moon landings, and in 2004 founded Virgin Galactic to fly private passengers to space. He created the company to buy spacecraft built by aerospace designer Burt Rutan’s Scaled Composites, which created the SpaceShipOne vehicle that won a $10 million prize for flying twice to the edge of space within two weeks.

Virgin Galactic’s SpaceShipTwo system came out of Branson’s deal with Scaled Composites. The spacecraft’s development has had multiple setbacks, however, including a rocket engine explosion on the ground in 2007 that killed three Scaled Composite employees and the crash of the first SpaceShipTwo vehicle, VSS Enterprise, in 2014 that killed Virgin Galactic co-pilot Michael Alsbury and injured pilot Peter Siebold.

The company then built VSS Unity, designed with additional safety measures to prevent future accidents. Virgin Galactic began testing Unity in 2016 and, in December 2018, it reached space for the first time. Additionally, Virgin Galactic earlier this year rolled the next spacecraft in its fleet, VSS Imagine, which is the first of its next-generation SpaceShip III class of vehicles.

Last month Virgin Galactic received a license expansion from the U.S. Federal Aviation Administration, allowing the company to fly passengers on future spaceflights. The company completed a 29 element verification and validation program for the FAA, clearing the final two regulatory milestones with its most recent spaceflight test in May.

Branson was not previously expected to fly on Sunday’s spaceflight, as Virgin Galactic leadership had said the company planned to fly the founder on its second to last test flight. But after fellow billionaire Jeff Bezos announced he would fly on his company Blue Origin’s first passenger flight on July 20, Virgin Galactic rearranged its schedule — aiming to fly Branson nine days before Bezos.

Launching ahead of Bezos or Elon Musk, Sunday’s flight means Branson is the first of the billionaire space company founders to ride his own spacecraft.

Virgin Galactic and Blue Origin are competing in the realm of suborbital space tourism, with both companies’ spacecraft carrying passengers to the edge of space to float in microgravity for a couple of minutes.  An orbital flight, such as with Musk’s SpaceX, costs tens of millions of dollars and typically spends multiple days or weeks in space.

Branson’s company believes that there is a market to carry as much as 2 million people on suborbital spaceflights priced in the $250,000 to $500,000 range, with the market expanding if and when costs come down.

Gen X workers, who are 45 years and above, may be bearing the brunt of a global unemployment crisis as...

China is beating the U.S. when it comes to innovation in online money, posing challenges to the U.S. dollar's status...

U.S. equities rose Friday with the the major averages hitting new records as they overcame concerns about economic growth from...

The National Football League plans to operate as normal as possible for the upcoming 2021 season and told teams they...

People wearing face protective masks walk on Hollywood Blvd during the outbreak of the coronavirus disease (COVID-19), in Los Angeles,...

Shares of Netflix recovered from an initial dip and were up nearly 1% after the bell Tuesday after the company...