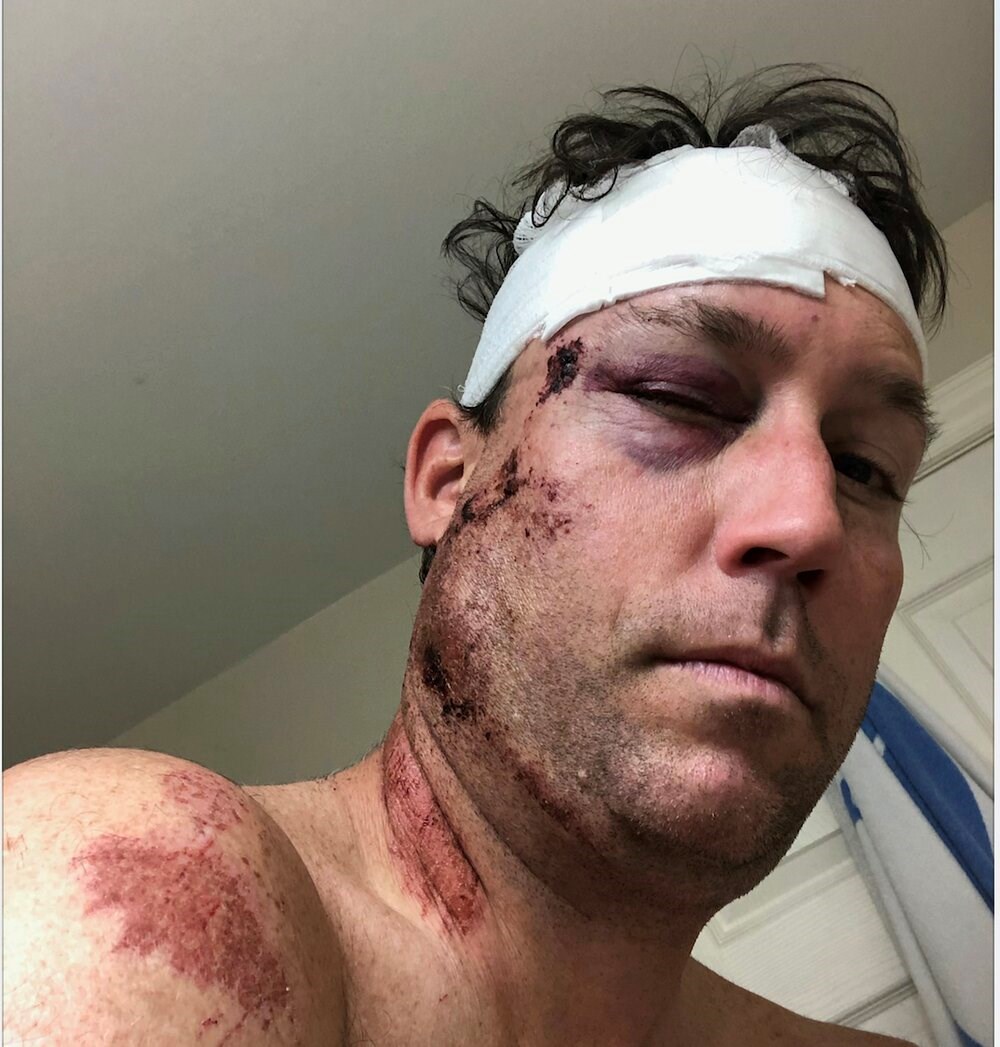 The last thing Scott Shepherd remembers were the headlights barrelling toward him.

He had just left his North Vancouver home for a walk and was strolling down the sidewalk on Lynn Valley’s Mountain Highway.

Out of nowhere, a car jumped the curb and slammed into him, sending Shepherd flying through the air. When he crashed into the ground, his forehead bounced off a rock in someone’s garden, knocking him unconscious.

“Next thing I know I’m standing up, wiping blood off my forehead,” he told Glacier Media.

By then, a crowd of people had already gathered around him, and a passing RCMP officer slapped a 24-hour roadside suspension on the driver after he blew over the alcohol limit.

That was May 10. A week and a half later, Shepherd said he’s spent most of his time locked in a dark room, healing his wounds and recovering from a severe concussion.

On top of the trauma of the accident, Shepherd has become an early test case in a new ICBC insurance paradigm that limits access to legal recourse following a collision.

Branded “enhanced care,” the ICBC “no-fault” insurance scheme went into effect May 1 as part of a government push to lower insurance premiums and pull itself out of crippling debt.

To do that, the no-fault system means most crashes don’t go to court in order to hash out costly lawsuits; instead, ICBC directly pays victims money, reimbursing them for the cost of rehabilitation and lost income.

Of the $1.5 billion ICBC said it will save annually under the new system, most of the money is supposed to go toward boosting benefits to crash victims. That’s supposed to lead to improvements in access to everything from massage therapy, personal care assistants and payments for lost wages.

But as Shepherd slowly recovers from his accident, he said he’s already finding situations where those promises aren’t adding up.

“It’s going to end up costing me out of pocket just to get therapy. I reached out to a concussion specialist. The first sessions cost $300. ICBC will only cover $200,” he said. “If there was a cash settlement on the side, out of that I could make up the shortcomings of all these things on the side.”

“I don’t see how I have to be out of pocket when someone jumps the curb and runs me over.”

Since the accident, Shepherd said ICBC assigned him an adjuster, the person he goes to get any payouts approved. Everything has been complicated, he said, by the fact that he’s a single father in the midst of a career change.

Shepherd used to be a pro golfer and still gives classes. Since the accident, he has been forced to cancel all of his classes. He’s also now in school full-time to try and launch a new career in life insurance. But studying all day in a dark room leaves him little time to advocate for himself, visit specialists and be with his son.

“I’m constantly dizzy. I can’t stand up. I’ve had two showers in the last 10 days because I fall,” he said. “At the end of the day, if I don’t do a good enough job of explaining the value of my life, I’m worried that ICBC will only cover a percentage of the health recovery benefits.”

“I reached out to a couple of lawyers who said their hands are tied. There is nothing they can do.”

A RIGHT TO A DAY IN COURT

Shepherd isn’t the only one concerned about the Insurance Corp. of B.C.’s new plan. By removing the right to sue in order to recover costs from an accident, crash victims are denied independent representation to advocate on their behalf.

“There’s no way of resorting to litigation, which is sort of democracy’s way of saying you screwed me over you’re going to regret it,” said Colin Brown, CEO of Stratford Underwriting in North Vancouver.

As the former chief underwriter of ICBC, he helped establish the corporation’s operational framework. Brown accepts ICBC has set up Civil Resolution Tribunals, but for most people, he said they will have a hard time representing themselves.

After fewer than three weeks under the “no-fault” system, Brown said he has seen hundreds of cases come across his desk. So far, he said the material damage side of it has been “pretty smooth.” It’s the injuries where things have changed.

“The Mickey Mouse stuff, the shoulder, the headaches. People don’t even bother. The paperwork is too difficult to get through,” he said. “It’s sort of a filtering system at the low end.”

While Brown appreciates the drive to push down insurance premiums and keep frivolous claims out of court, he’s worried it will come at too high a cost, especially for people with serious but perhaps not lifelong debilitating injuries — people like Shepherd.

Under the old system, someone with a serious head injury could easily claim $100,000, said Brown. That would go a long way to plugging up the holes in lost income and the costs of recovery.

“There will be disagreements. Will you be fully disabled for the rest of your life and should you be getting these cheques? Or are you going to be going into rehab and working like a son of a bitch?”

Or as Shepherd put it: “That last line of defence is now gone.”

A MATTER OF TIME

In the meantime, he’s in the resting and pain management stage, relying on friends, taxis and Ubers to get to doctor and rehab appointments.

“I’m not interested in trying to take advantage of the situation but I shouldn’t be out of pocket for things that are deemed necessary,” he said. “This is going to be a fight. I’m the first of many. It’s only a matter of time.”