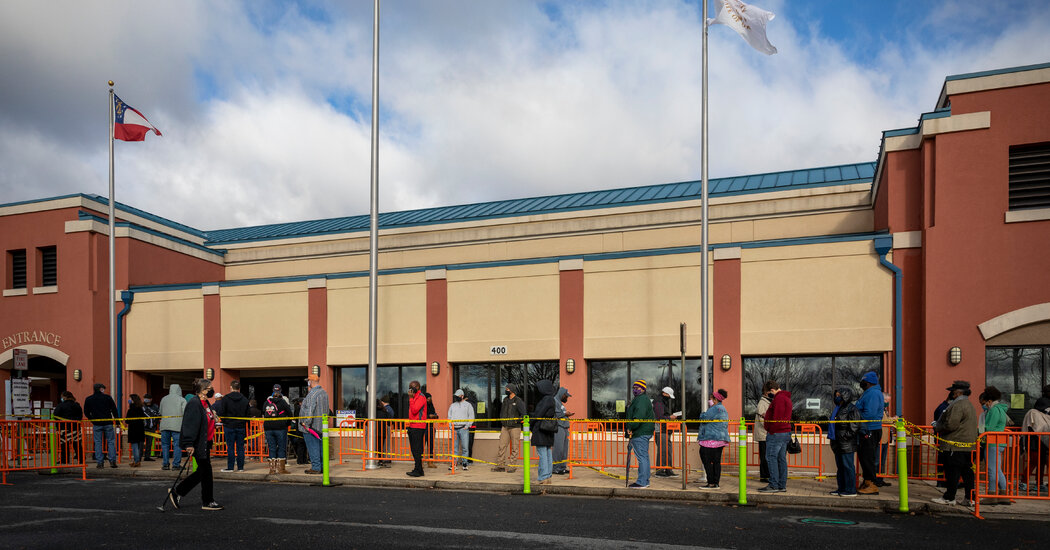 The far-reaching voting rights measure that Democrats are pressing to enact, known as the For the People Act, was more a political statement than serious legislation when lawmakers first proposed it in 2019.

The bill, clocking in at 818 pages, includes a laundry list of Democratic priorities like expanded ballot access, tighter controls on political money and support for District of Columbia statehood. It had no chance of becoming law when Republicans controlled the Senate and the White House.

But with Democrats in power, the wish list has become a potentially historic law and the most pervasive overhaul of federal election rules in recent memory. Republicans have assailed it as a Democratic effort to rig the political system in their favor, even as some privately acknowledge that the bill’s broad aims are overwhelmingly popular, even among conservatives.

President Biden and Democrats portray the bill as the civil rights imperative of modern times and call it essential to shoring up a shaky democracy. But many of them privately concede that some of its provisions, like restrictions on political money, have opponents in their own ranks.

Here is a summary of some of the central elements of the measure:

The bill would set a national floor for ballot access.

Should it become law, the legislation would effectively set a national floor on ballot access, requiring all federal elections to start with an identical set of rules. States and other federal jurisdictions could tweak them to provide more access, but not less. Some states like Colorado and Minnesota have rules that are more generous that the bill mandates; others, like Texas and Tennessee, make it much harder to register and vote than the bill envisions.

Jurisdictions could ignore the rules for state and local elections, but as a practical matter, the new requirements would most likely apply to all voting.

Some Republicans charge that the bill would rig the voting rules in favor of Democrats. But Republican officials have been working for the past decade to restrict ballot access in ways that make it harder to vote for minority groups that traditionally favor Democrats.

Beyond the civic benefits of greater participation in elections, it is clear that expanding voting to more people would benefit both parties. Indeed, as Republicans have increasingly appealed to lower-income and less-educated voters, some experts say the restrictions that they have imposed may actually be cutting into turnout by the party’s loyalists.

Many Republican states have had one or more of the voting provisions for years with no indication that they disproportionately favor one party.

The measure makes it much easier to register to vote.

All voters would be able to register, designate party affiliations, change addresses and de-register online; 40 states and the District of Columbia offer some or all of those options. Voters would also be automatically registered when visiting state or federal agencies unless they explicitly decline, similar to what has been required of most states — but not always carried out — by the federal “motor-voter law” that passed in 1993. Voters could also register when they cast a ballot, either on Election Day or during early voting, as is already the case in 21 states.

Early voting would be expanded nationwide, with all jurisdictions offering it for 15 days, for 10 hours daily, at easily accessible polling places. All but a handful of states allow early voting; the average early-ballot period is 19 days, according to the National Conference of State Legislatures. The bill would also require jurisdictions to provide at least one secure ballot drop box for every 20,000 voters.

Mail voting would be extended nationwide, and states would have to prepay postage and electronically track ballots so voters know when their ballots arrive and whether they have mistakes that need to be fixed.

It would defang many voting restrictions imposed by Republicans.

Republicans have won enactment of voter-ID laws in most states by arguing that they are needed to combat fraud, even though the sort of in-person fraud that such rules would discourage is all but nonexistent. The bill would effectively nullify such laws, allowing voters to sign affidavits swearing to their identities rather than showing ID.

The measure would also require that voters be notified at least a week before an election if their polling places have changed, and order steps to reduce long lines. Voting rights activists and specialists argue that turnout falls when polling locations are closed or changed.

The legislation also tries to beat back rules adopted by some states, including Texas and New Hampshire, that make it more difficult for college students to vote. It would designate universities as voter-registration agencies and offer nonpartisan assistance to students who cast absentee ballots.

Under the bill, states would be barred from taking voters off the rolls because they had not participated in recent elections, a practice that the Supreme Court upheld in 2018. Critics argue that the practice is aimed at reducing turnout.

It would also restore voting rights to felons who have completed their sentences, cementing into law a practice that states have increasingly adopted but some, such as Florida, have resisted.

Among other redistricting changes, the bill would mandate that political maps be drawn by nonpartisan commissions, not by state legislatures. If a legislature refused to approve a map, a three-judge federal panel would take over drafting.

A number of states have established such commissions in recent years, including Ohio and Colorado, but removing politics from political maps has proved difficult. Critics say Arizona’s Republican governor has stacked the selection process for that state’s commission, and the composition of Colorado’s new commission also has come under fire. The legislation lays out detailed instructions for choosing panel members.

Political contributions would be reined in.

The legislation tries to stop the flow of money to campaigns from abroad by requiring political committees to report foreign contacts, outlawing the use of shell companies to launder foreign contributions and barring foreigners from advising PACs on contributions and other political efforts. These moves and other requirements are direct responses to Russian efforts to support Donald J. Trump in the 2016 presidential campaign.

The most contentious provisions would pull back the veil over so-called dark political money, whose donors are secret, and regulate independent political expenditures — mostly spending that is not expressly coordinated with a candidate — by corporations.

Those provisions would counter the Supreme Court’s 2010 decision in Citizens United v. Federal Election Commission that independent expenditures are a form of free speech protected by the Constitution. The ruling effectively allowed nonprofit groups to spend unlimited amounts of money — $750 million in 2020, according to the advocacy group OpenSecrets — to support or oppose candidates or causes while keeping donors anonymous.

Public corporations would require approval by boards of directors and shareholders for independent expenditures and some other political spending over $50,000.

The bill would also require nonprofit groups spending money on elections or judicial nominations to disclose the donor of any contribution over $10,000 and ban shifting money between groups to disguise a donor’s identity.

Finally, the measure would set up new funds to match small donations to Senate and presidential candidates. The money, raised through fines on corporate lawbreakers and tax cheats, would be available only to candidates who reject political donations of more than $1,000.