Rather like age and weight, my annual health insurance premium is a number I’d prefer to ignore. But I probably shouldn’t.

A couple of weeks ago I received an email confirming this year’s health insurance premium. As usual, I ignored it. Renewal is automatic and I have other boring chores to do under lockdown.

I’ve now tidied my office, turned out cupboards, sent the Bentley for its MOT, cleaned out the fridge and ordered more fizz online than I know what to do with. I’ve even delved deeper into the list of bores that rarely get done to beat lockdown tedium.

I’ve checked the services that automatically renew to see if they’re out of contract or require a switch. I changed my energy supplier and saved £400. I’ve discovered that BT raises its prices by CPI plus 3.99 per cent every March — if you’re not careful you’ll be paying more for their broadband and phone line than you might for a complete entertainment and telecommunications package from almost anyone else.

I’ve renewed my mortgage and secured a three-year deal at 1.2 per cent, saving another dollop of cash. And I am due a free mobile phone upgrade. I’m on a roll! I wonder where that health insurance renewal email is?

When I did eventually find the offending communication, I was horrified.

The annual quote was £5,376 — a near 50 per cent increase on last year’s already wallet-draining £3,620. Outrageous! I rang my insurer’s renewal helpline to diagnose what on earth was going on.

Surprisingly, the premium increase was nothing to do with my age or weight. It was because last year, for the very first time, I’d used my health insurance for the reason it was intended — I had made a claim for private treatment. 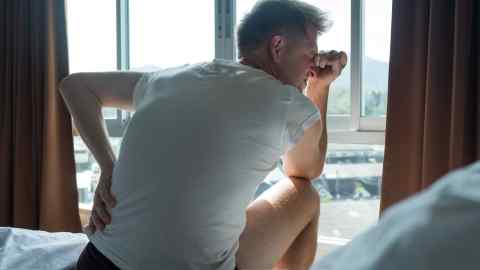 A rather nasty back problem had not resolved itself with physiotherapy and I’d been told to go for an MRI scan. It turned out one of my lower discs had dried out. There were various treatments I could have pursued, involving scarily large needles and lumbar injections that were not without risk. I chose not to. The advice was that the best treatment was to go on a diet.

As someone whose weight has fluctuated over the years (ahem) a button pinging off my shirt is a sure sign that I need to have a word with myself and start defatting.

Regular readers will know of my love for a semi-elasticated waist band in a work trouser. Now trackies are acceptable as workwear, it’s harder to notice the strain (try and put a suit on, and you’ll see what I mean).

It turns out the “C diet” that I gravitate towards, where you see food and eat it, is not the one to go for. During the pandemic, I’ve been forcibly separated from all my favourite restaurants, and have kept trim by taking long walks, playing tennis (until lockdown arrived again) and putting out the bins.

But I digress — back to the diagnosis of the hefty bill. The adviser explained that because I’d had the audacity to make a claim of £305 for an MRI scan, this had caused my annual premium to inflate by nearly six times that amount.

If I did a “no claim buyback”, he suggested, that would reduce my premium.

So let me get this straight, I said. If I swallow the £305 cost of what the health insurance was supposed to pay for, I’ll retain my no claims bonus, and thus get to renew my annual cover for a similar sum?

This proved to be correct — but merely amplified my disgruntlement.

Striking out the one claim I had needed to make, I had basically paid three and a half grand for services I would have been largely unable to access due to the coronavirus. So what about a refund?

Back in June, the Financial Conduct Authority provided guidance that insurance products must “provide appropriate value and take action where there has been a fundamental change in risk or where certain benefits can no longer be provided”. Indeed, my renewal email stated that services unavailable during earlier lockdowns were back on stream.

By now, the bloke on the end of the phone was probably willing me to die of some hideous uninsurable ailment.

What on earth is the point of having health insurance if claiming is more expensive than paying as I go?

Undeterred, he directed me to a statement on the company’s website, where my insurer’s chief executive stated they would only provide a premium rebate if claims had been lower. Hmmm. Seemed like a cop out to me.

But it got me thinking. What on earth is the point of having health insurance if claiming is more expensive than paying as I go? Is it only there for when I need a really massive job doing? In which case, would I be better to save on the premiums and cough up if needs be?

As a freelancer, I’m acutely aware of these costs as it’s something I have to finance entirely myself. If you get health insurance via your company, you might be less aware — but you really should be.

Of course, I could shop around for a better deal and find out just how much I’m overpaying. This strategy works well for car insurance, where quotes for cover are almost reasonable (£300 quid for the Bentley isn’t bad).

While I might save a few hundred quid if I switch to another health insurer, it’s not that simple. Unlike car insurance, as you get older, the more expensive and limited your choices will be. And if you have previously made a claim for a particular condition, that will be excluded from your cover. Heads they win, tails you lose!

So, somewhat reluctantly, I’ve stuck with the same insurer — but the whole experience has left me feeling rather sick. I’d love to hear about readers’ experiences and exasperations with private health insurance, as I surely cannot be the only one getting dangerously close to making a claim for increased stress or anger.

A bit like a nuclear weapon, an insurance policy is there in the hope that you’ll never use it. All this fallout isn’t desired.