The EU has said AstraZeneca must take coronavirus vaccines from UK factories to make up a shortfall in supplies to its member states, a demand that could unleash an explosive post-Brexit political fight.

AstraZeneca was contractually obliged to use vaccines produced at UK plants to fulfil its delivery obligations to EU states, the European Commission said, as Brussels called on the manufacturer to agree to publish its EU supply contract.

The EU demands marked a further escalation in a bitter dispute since AstraZeneca last week said its first-quarter deliveries would fall more than 50 per cent short of the bloc’s expectations.

Mr Johnson told a press conference in Downing Street on Wednesday evening: “We are very confident of our supplies and our contracts and we are going ahead on that basis.” His allies said he wants to stop the row escalating and sparking “vaccine nationalism”.

The contract with the UK was signed first and the UK, of course, said ‘you supply us first’, and this is fair enough

Asked whether the UK would consider export restrictions for vaccines — of the kind being considered by the EU — Mr Johnson stressed the need for international co-operation in the effort to fight Covid-19.

Stella Kyriakides, EU health commissioner, said AstraZeneca must fulfil “contractual, societal and moral obligations”. In a media briefing, she insisted that there was “no hierarchy of factories” and that the drugmaker’s two UK Covid-19 vaccine plants were as much part of the EU supply agreement as the two inside the bloc.

“This is why they have to deliver,” she said, arguing that AstraZeneca’s position that it would not use production facilities outside the EU to make up the shortfall was “against the letter and the spirit of our agreement”.

Mr Soriot told European newspapers in an interview on Tuesday that the supply schedule for the bloc was not a “commitment” by the company but agreed as a “best effort”. The EU signed its vaccine supply contract three months later than the UK, leaving it less time to sort out production “glitches”, he said. “The contract with the UK was signed first and the UK, of course, said ‘you supply us first’, and this is fair enough.”

In response, Ms Kyriakides said the EU rejected “the logic of first come, first served”. “That may work at the neighbourhood butcher’s but not in contracts — and not in our advanced [vaccine] purchase agreements.”

Mark Francois, chair of the UK Conservative party’s European Research Group, said the pandemic was a tragic event but that “one of the side effects has been it has brutally exposed the weakness in the EU project, from protectionism to excessive bureaucracy”.

AstraZeneca declined to comment further, pointing instead to Mr Soriot’s interview and to a company statement issued earlier on Wednesday. 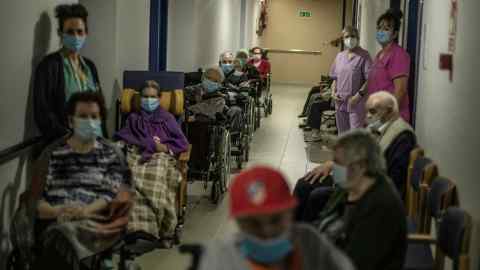 AstraZeneca said it was committed to “even closer co-ordination” in that regard.

An EU official said AstraZeneca had pledged to deliver only about a quarter of the 100m-plus doses the EU had expected in the first three months of 2021.

In Tuesday’s interview, Mr Soriot said AstraZeneca could supply EU countries with 17m doses in February. In the UK, the company is on target to deliver an average of 2m doses per week for the rest of the year, said people familiar with the matter.

Ms Kyriakides signalled that the commission was also investigating whether vaccines produced by AstraZeneca inside the EU had previously been exported to the UK. Asked if doses had ever been shipped to the UK, she replied: “No company should be under any illusion that we don’t have the means to understand what is happening.”

One EU diplomat said: “Given that, according to several reports, Britain was supplied with AstraZeneca vaccines produced in the EU when its British factories faced production shortfalls a few weeks ago, it would only be logical now to deliver vaccines from Britain to the EU.” In a sign of dwindling vaccine supplies across the EU, the Madrid region of Spain on Wednesday halted all new jabs for at least 10 days, while Catalonia said it, too, was running out of doses.

Production of the AstraZeneca vaccine in the UK was temporarily halted on Wednesday after discovery of a “suspicious package” at one of the two British manufacturing plants in Wrexham, north Wales.

North Wales Police said an army bomb disposal unit had examined the package and ensured that it was safe to handle.

Wockhardt UK, operator of the plant, later said the incident had “been concluded” and that the temporary suspension of manufacturing had in no way affected its production schedule.

Additional reporting by Robert Wright and Helen Warrell in London

Video: Coronavirus: the race between vaccines and new variants