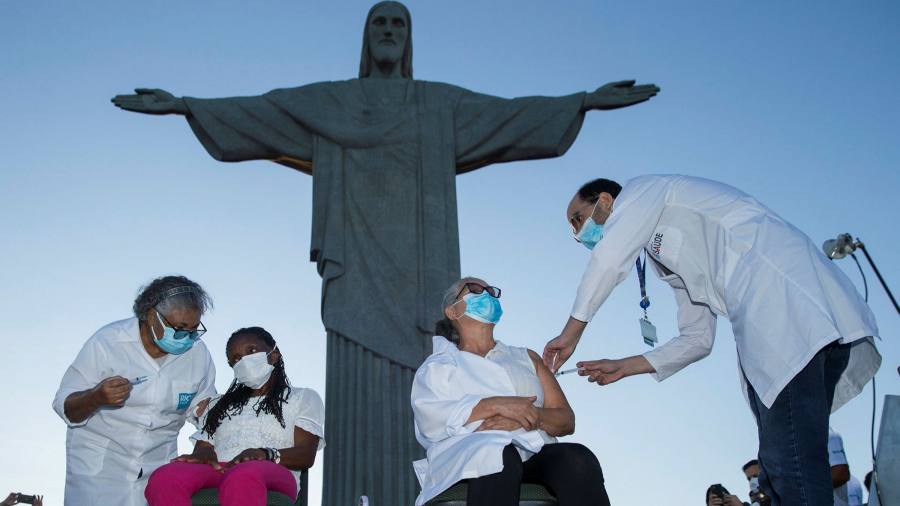 “Spend as much as you can.” Most countries have followed IMF chief Kristalina Georgieva’s coronavirus crisis advice to some degree, but few with quite the alacrity of Brazil. President Jair Bolsonaro outspent every other major emerging market, according to the Institute of International Finance, boosting central government spending almost 40 per cent between January and November.

Most of the money went on “corona vouchers”: a flat-rate temporary income boost for nearly a third of the population. The move lifted beer sales — and Mr Bolsonaro’s popularity — but proved ruinous for Brazil’s already shaky finances. Public debt now stands at more than 91 per cent of gross domestic product, one of the highest levels of any emerging market. Plagued by weak growth, Brazil has not balanced its budget before debt servicing costs since 2013.

Vital reforms to trim overgenerous salaries and perks for public sector workers remain stalled in Congress. A much-touted overhaul of the convoluted tax system has yet to happen. Privatisation is stymied by vested interests. The corona voucher scheme expired at the end of last year but, as virus infections jump again, Brazilian politicians are lobbying for it to restart.

Paulo Guedes, Brazil’s Friedmanite economy minister, has so far resisted. But his hands are tied by a president whose instincts are unabashedly populist and whose overriding goal is re-election next year. Mr Guedes’ promises that structural reforms remain on track ring hollower and hollower; several of his key lieutenants have already jumped ship.

Should the international community care? About 95 per cent of Brazil’s debt is domestic, most of it held by local investors. Few foreign creditors, whether private or multilateral, would lose money from a default. Brazil has teetered on the fiscal brink many times before, usually without falling over.

The risks this time are higher. Most of Brazil’s R$4.8tn ($878bn) of debt is short-term and maturities are getting shorter: almost 30 per cent comes due in the next year. Inflation, an old bugbear, is ticking upwards. Local markets are pricing in sharp interest rate rises, starting this year. Even Mr Bolsonaro has declared that the country is broke.

Brazil has been one of the countries worst affected by coronavirus and the pandemic continues to take a heavy toll, aided by Mr Bolsonaro’s stubborn insouciance. A recent surge in cases in the Amazon city of Manaus overwhelmed hospitals and led to oxygen shortages so bad that some patients were left to asphyxiate. Venezuela’s revolutionary socialist government scored an improbable propaganda coup by despatching oxygen trucks to the border to help.

Brazil can still step back from the brink. Unlike many nations caught in the economic agonies of coronavirus, its fate lies largely in its own hands. The government can still fund itself. There need be no conflict between providing well-directed support to the economy and curing the longer-term ills of pampered civil servants, protected national businesses and a privileged elite that does not pay its fair share of tax in one of the world’s most unequal societies.

Mr Bolsonaro would do well to remember the second part of Ms Georgieva’s pandemic advice: “But keep the receipts.” Accountability and transparency have been lacking in Latin America’s biggest nation for too long and its 210m citizens have paid the price. The pandemic should force a long-overdue reckoning, not just of the national accounts, but of the grotesque economic imbalances which have blighted its society.

Editorial Team
18 January 2022
The crypto ecosystem has expanded significantly in recent years. While institutions such as the IMF are starting to embrace its...

Editorial Team
17 January 2022
A Message from OPSEU/SEFPO’s Insurance provider, RGI Group: There are lots of ways to save on home insurance, from making...

Editorial Team
17 January 2022
A Message from OPSEU/SEFPO’s Insurance provider, RGI Group: There are lots of ways to save on home insurance, from making...