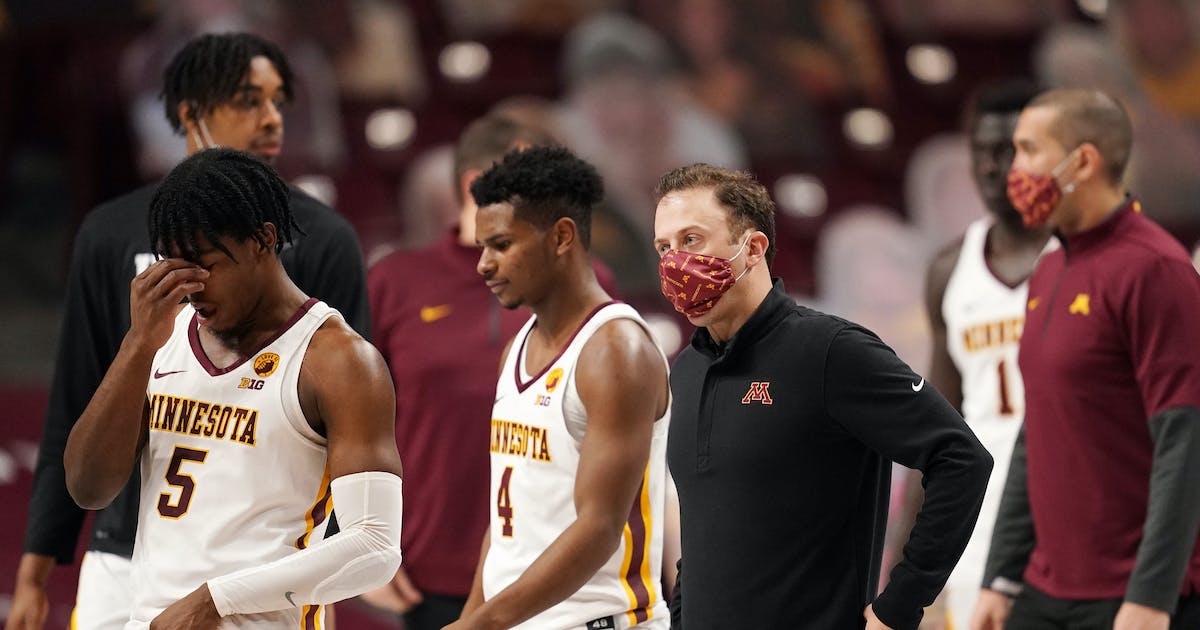 Late in the first half Saturday, the cheering from Maryland’s bench could be heard echoing throughout an empty Williams Arena. It gave their teammates a spark.

The Terrapins sensed an upset because they brought more energy to the building than a 17th-ranked Gophers team that hadn’t lost at home this season.

The Gophers could learn something from their opponent about how to win on the road.

During a year without a pandemic, the Gophers maybe would get a lift from a packed crowd, but they couldn’t overcome a flat start and fell 63-49 to the feisty Terrapins.

“That’s probably the slowest we ever came out to a game,” Gophers senior forward Brandon Johnson said. “We just made the mistake of thinking everything was just going to come easy. In this conference everything is going to come as a challenge, regardless of who we’re playing.”

Maryland is unranked, but all three of its Big Ten victories are on the road. After beating Wisconsin and Illinois earlier this season, the Terps (10-7, 3-6) defeated their third ranked opponent on the road Saturday for the first time in school history.

The Gophers (11-5, 4-5) are still an impressive 11-1 at the Barn this season, but they are 0-4 on the road, all blowout losses. If they got anything out of Saturday’s disappointing effort, it could be studying Maryland’s formula to win on the road.

Marcus Carr finished with 25 points on 8-for-14 shooting, but rest of the Gophers shot just 6-for-32 from the field. They shot 24% in the second half.

Any momentum built after an upset win over No. 7 Michigan a week earlier at the Barn was lost, but Richard Pitino’s team knows from that victory it can play with much more energy and effort than it showed.

“It’s still a long season,” freshman Jamal Mashburn said. “Being in the Big Ten this is the best conference in America, so you’re going to have games when anybody can beat anybody. So we just have to be ready to play.”

How did the Terps look like the superior team? They didn’t let the Gophers outwork or outhustle them. They set the tone defensively. That appears to be part of the secret to Maryland becoming road warriors.

In road wins over Illinois, Wisconsin and the Gophers, Mark Turgeon’s team outshot its opponents from the foul line but also held them to a combined 39% shooting from the field. They used their length and athleticism to disrupt teams from getting comfortable offensively.

“They’re not big in the frontcourt, but they’re big in the backcourt,” Pitino said. “That can be equally disruptive. That really was. They made us earn all 49 points.”

The Gophers gave Michigan problems in their previous game, holding one of the league’s best offenses to under 40% shooting and forcing 20 turnovers, but they couldn’t establish that same defensive identity Saturday — and it hurt.

In the first half, Maryland jumped to a 17-3 lead after Eric Ayala’s three-pointer capped a 12-1 run. The Gophers cut it to a three-point deficit with Carr’s back-to-back layups before halftime, but that would be the closest they would get.

Coming off a 22-point performance in the 75-57 win over the Wolverines, Gophers center Liam Robbins struggled to make his presence felt with just six points and two rebounds in 22 minutes Saturday.

The Terps’ starting center was 6-7 Donta Scott, but they also had four guards 6-5 or taller who created havoc defensively for Robbins and company.

Robbins had to leave the game with his fourth foul with 17:56 to play. He picked up three fouls in a quick two-minute stretch early in the second half.

The Gophers pulled within 41-35 on Brandon Johnson’s three-point play on a fouled dunk three minutes later, but the rally was short-lived. Robbins fouled out with Maryland leading 56-44 at the 4:41 mark.

The Gophers had expected to play at Nebraska on Wednesday, but that game was postponed because of COVID-19 cases in the Cornhuskers program.

Nearly a week off helped the Gophers rest and show up with more fight and spirit in the rematch against the Wolverines, but the extra time backfired this time.

The Gophers, who join Nebraska as the only Big Ten teams with zero conference road wins this season, play back-to-back road games Jan. 30 at Purdue and Feb. 4 at Rutgers. And there could be a rescheduled Nebraska away game in the next two weeks.

Pitino will surely find out if the Gophers can duplicate the energy and defensive mind-set Maryland played with on the road and make it part of its own identity.

“We’re about to have another one,” Pitino said about a long break before heading on the road, “so we better figure it out.”