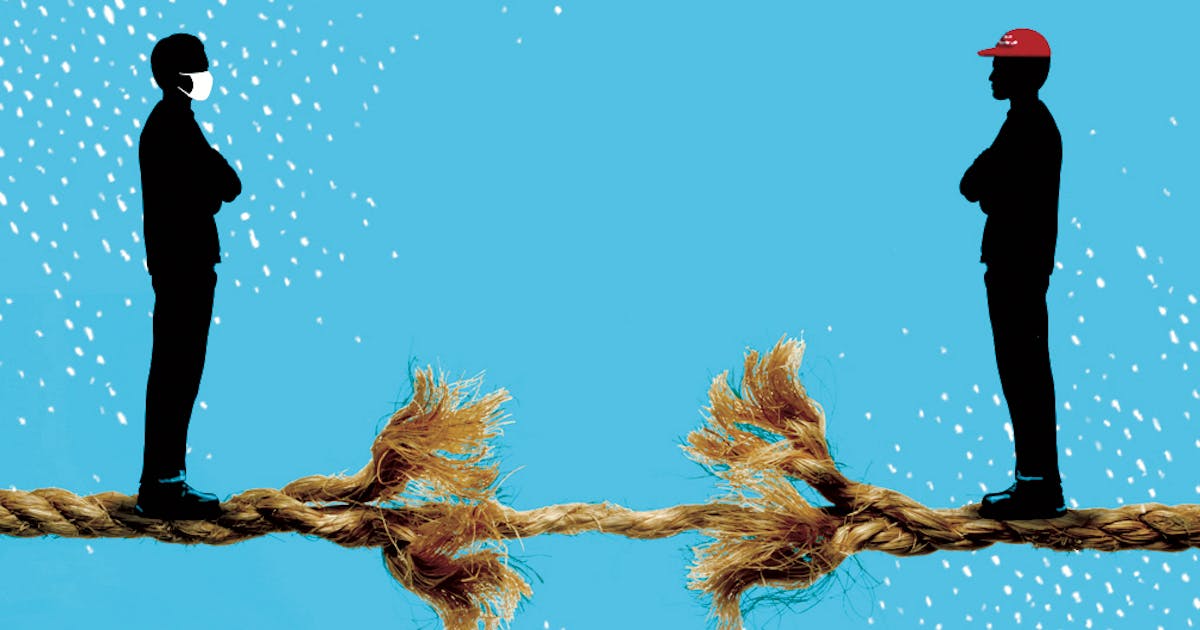 Despite the pandemic, Carrie Borchardt hasn’t lost contact with her family. Since April, she, her four siblings and her widowed father have met weekly for virtual chats.

But they can’t, don’t and won’t talk about what’s really on their minds.

“We have the superficial conversations you’d have in a waiting room with a stranger. It’s not the emotional sharing that binds people. Week after week, it feels like poverty,” she said. “It makes me sad and lonely to think they don’t really know me.”

Calling herself the “odd woman out,” Borchardt, of Apple Valley, identifies as a Democrat. Her family, most of whom live in Nebraska, are conservative Republicans. They have always disagreed about politics, but they no longer even share the same set of facts to draw upon.

“So many subjects have become forbidden,” Borchardt sighed. “Now the subject of politics includes COVID, our safety practices, the election, the insurrection at the Capitol. Part of my sadness as I watched that unfold was that I couldn’t talk to my family about it.”

Many Americans had presumed the political division that has deepened for years might begin to ebb once the 2020 election was over. Instead, it seems that tempers have become further inflamed, taking a mounting toll of damaged or destroyed relationships.

We remain at risk, some say, of losing essential connections to kith and kin.

“Some families accept that they can only talk about the dog or ‘The Bachelorette,’ but that cuts something important from family life,” said William Doherty, a professor of family social science at the University of Minnesota. “It also hurts our democracy when we isolate in our bubble and can’t talk as citizens.”

“Agreeing to disagree” used to be the compromise that allowed people who cared for one another to allow for differences of opinion.

That’s become more difficult as many on both sides of the chasm see the opposition as not just wrong but morally indefensible. The pervasive belief that anyone on the other side of the political fence is dangerous or evil strains civility and the ability to seek common ground.

The storming of the Capitol earlier this month revealed just how at odds we are.

“I didn’t think it could get worse,” said Doherty. “I thought we had bottomed out. But the floor keeps going down.”

In workshops and webinars, Doherty brings some of the techniques he’s used when counseling troubled couples to teach what he calls “reds and blues” to engage with loved ones who have opposing views.

“Without saying that everything is equivalent, we ask people at our workshops to acknowledge that both sides have contributed to this divisiveness. You have to say, ‘My side is part of the problem, too,’ and boy, that’s hard,” he said.

Instead of duking it out in a group, Doherty encourages people to seek each other out for one-on-one discussions.

“In those conversations, you can decide to try to understand them better. It’s not going to happen in a group,” he said. “A truism about groups is that whoever is the most upset, the most judgmental, whoever has the most dogmatic opinions, will drag the group down to their level. Others then respond in kind even when they start out trying to be more reasonable.”

Most of all, he advises people to step back when arguments go nuclear.

“When people in families say, ‘You are no longer in my life, I want nothing to do with you,’ there are massive implications. The emotional damage is terrible and almost always unnecessary,” he said.

The current political atmosphere is so charged that it can be poisonous even when there are no voices raised or names called.

Mike Skillrud can’t pinpoint exactly how, but politics cost him a relationship with a treasured friend.

Skillrud participates in a daily text chain with a group of friends who became inseparable during their college years and have stayed close since graduating four decades ago. It included his former roommate Nick.

“One or two of the guys [in the group] identify as Trump supporters, but our conversations are about sports and sometimes food. We very rarely touch on politics, ” said Skillrud, of West St. Paul. “One day Nick said he needed to retreat from the group. He’s married to an immigrant and he said his family and friends from all over the world would be hurt by Trump.”

That was last summer. Since then, Skillrud has called and texted his old friend, most recently to wish him a happy New Year. But Nick has never picked up or responded.

“I’ve looked at that string of text messages many times and I still don’t know what set him off,” Skillrud said. “It’s so painful. I hope someday he’ll come back to the group. I’d welcome him with open arms.”

Damaged relationships not only cause hurt feelings. They can lead to significant physical distress.

“This is rampant in my patients,” said Talee Vang, senior clinical psychologist at Hennepin Health Care. “Some notice they feel irritable, exhausted, anxious. Internalized pain may come out in depression, sleep disorders or substance use. They may overindulge in alcohol or food.”

And the pain goes beyond the warring parities.

Vang has seen collateral damage extend to neutral family members who struggle with divided loyalties, such as a parent who is pressured to pick a side when children take opposite stands.

“Rifts and ruptures cause enormous pain,” she said.

The bitter divide can carry dangerous implications when it spills over in the workplace.

When co-workers clash with each other or a supervisor, it can strain the power dynamic, crush camaraderie, cut productivity and derail promotions.

But liberal die-hard Ed Timek wasn’t worried when he wore his Biden T-shirt and “Make America Less Embarrassing” cap as he strolled into the office of his boss Eric Biafore, a two-time Trump-voting conservative.

“I said, “Oh, thanks, Ed. I was looking for something to wipe the windows with,’ ” said Biafore, general manager of the direct mail marketing company that Timek sells for.

The two also have a grudging but mutual respect for each other and have learned how to keep their fights fair.

“I’m interested in how he thinks and feels, what he reads,” Biafore said. “I want to know the other side of issues I feel strongly about; I want to know what Ed thinks about immigration and abortion policy, all the political hot buttons.”

The two also have learned when to back down.

“When things get too hot, we back it down and laugh,” Biafore said.

Timek admits he lost some “peripheral friends” because of his enthusiastic support for Joe Biden and contempt for Donald Trump, about which he regularly posts on social media. But his boss is not the only red contact in his mostly blue circle. He regularly exchanges texts with a longtime friend who is as conservative as Timek is liberal.

“He said once, I show him that not all Democrats are nuts and he shows me that not all Republicans are crazy. But you have to pick your adversaries carefully,” said Timek. “Banter takes two people who are not thin-skinned.”

It’s not impossible to mend frayed — or even ruptured — relationships. But it takes skill, patience and a sense of empathy, which seems to be in short supply.

“When people are hurt, they seek to be understood rather than to understand,” said Vang. “That’s when they need to take a step back and listen. I believe if the relationship held value before the breakage, people can find their way back to each other. They can repair it.”

Over the course of her life, Carrie Borchardt recalls that her family, like most, has had its ups and downs, times when formerly close siblings were estranged, but eventually patched up their differences.

She reminds herself that they’ve surmounted challenges in the past and may be able to do so again.

“We’ve had times when we were distant. Maybe we want to stick together in some form now because we know the consequences of what could happen if we don’t,” she said. “We have our quirks and frailties, but we have to find the skills to relate so we can get that closeness that we all long for.”

And in that, her family is following the Braver Angels playbook.

“In our workshops, we stress that it is important for families and our country that we try. We have to at least try,” said Doherty. “That’s the importance of this work. There is no way out of this except together.”

Kevyn Burger is a Minneapolis-based freelance broadcaster and writer.