One could argue that there are no two hobbies as dissimilar as golf and gambling. When you go on a course, you’re expecting a relaxed time with a friend or two, even if the game isn’t going that well for you. At a casino parlor, you’re probably going to have an emotional roller-coaster of an evening, filled with adrenaline.

However, even these two opposites can coexist in harmony. There are some establishments that give to each their own by offering both a golf course and a casino on the premises. And despite what myths about the US would have you believe, it’s not the only place in the world to host such clubs. As AussieCasinoHex reports, there are golf clubs that have a casino in Australia as well. Here’s a list of the top 5 establishments like that.

Despite its generic-sounding name, this is not just a country club. This is a venue with the official name Country Club that can boast an 18-hole course, a small casino inside, a hotel, and a number of other retreats. It’s one of the two Tasmania’s casinos and a really good one at that.

Apart from the golf course designed by a British Open Champion, this venue also offers a tennis court, horseback riding facility, and a bike rental that allows visitors to roam free in the countryside. Add the fact that the Tasmanian Country Club hosts concerts, has a gambling lounge, and offers high cuisine, and you have a place fit for all walks of life. 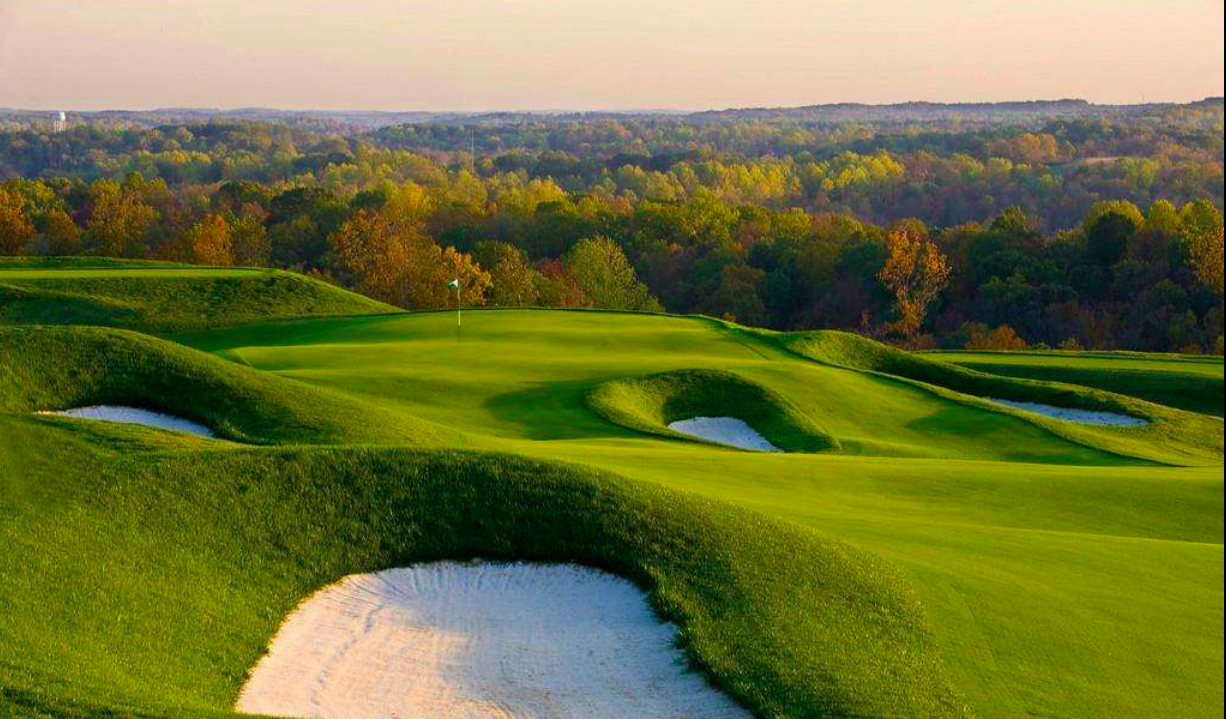 Though not as close to home as Tasmania, this resort in the state of Indiana also has some amazing views to attract audiences. The town of French Lick is situated on the verge of a national forest, the golf course of the French Lick Resort is a short drive into that forest. After you soak in the beautiful scenery and finish the 18-hole course designed by Pete Dye, a renowned American golf course builder, you can get back to town and enjoy an evening of gambling.

The French Lick Casino is surprisingly big for a town that small. It’s designed to look like a Vegas casino, and even though the number of slot machines and poker tables is a fair bit smaller than what you’d expect to see on the Strip, it’s enough to satisfy the crowds coming into French Lick. In addition to this casino, the resort has two hotels and a spa complex.

This resort has been open for almost as much as the US exists, since 1778. Located in the aptly named little town of White Sulfur Springs, this venue attracted wealthy Southerners to take a break from the heat of the lowlands. This influenced the design of the grand hotel known as The Old White — a foreigner may think it’s the White House itself.

There are four golf courses on the premises, including ones that opened as long ago as the 1830s and as recently as 2010. The casino is a fairly new addition to this traditional resort. It was opened in 2009 and boasts over 300 slot machines and 37 tables for roulette, blackjack, and other classic casino games.

However, golf and gambling are not the only pastimes available in this 200-year-old resort. Thanks to the proximity to a national park, there are multiple trails available, including bike and jeep trails. For visitors who are not that outdoorsy, there are plenty of spa options.

Despite being in the Deep South, this resort does not have an antebellum aesthetic of The Greenbrier. It’s a relatively modern recreational complex that was opened in 1999. The main building of the resorts combines a hotel with over 1,7000 rooms with a casino floor. The latter has both smoke-free slot machine zones, roulette tables, and poker rooms. The casino often gives free gambling lessons so look out for those opportunities.

Beau Rivage golf course, Fallen Oak, which is a classic 18-hole par-72 course, was designed by Tom Fazio, a renowned American architect. It’s fair to say this course is unique — it features centuries-old oaks, streams crossing the fairway, and a tee box inside elevate terrain that will challenge you on the last hole.

As for other entertainment options, Beau Rivage is a center of nightlife in Biloxi. You’ll find plenty of clubs and concert venues on the facility’s ground. 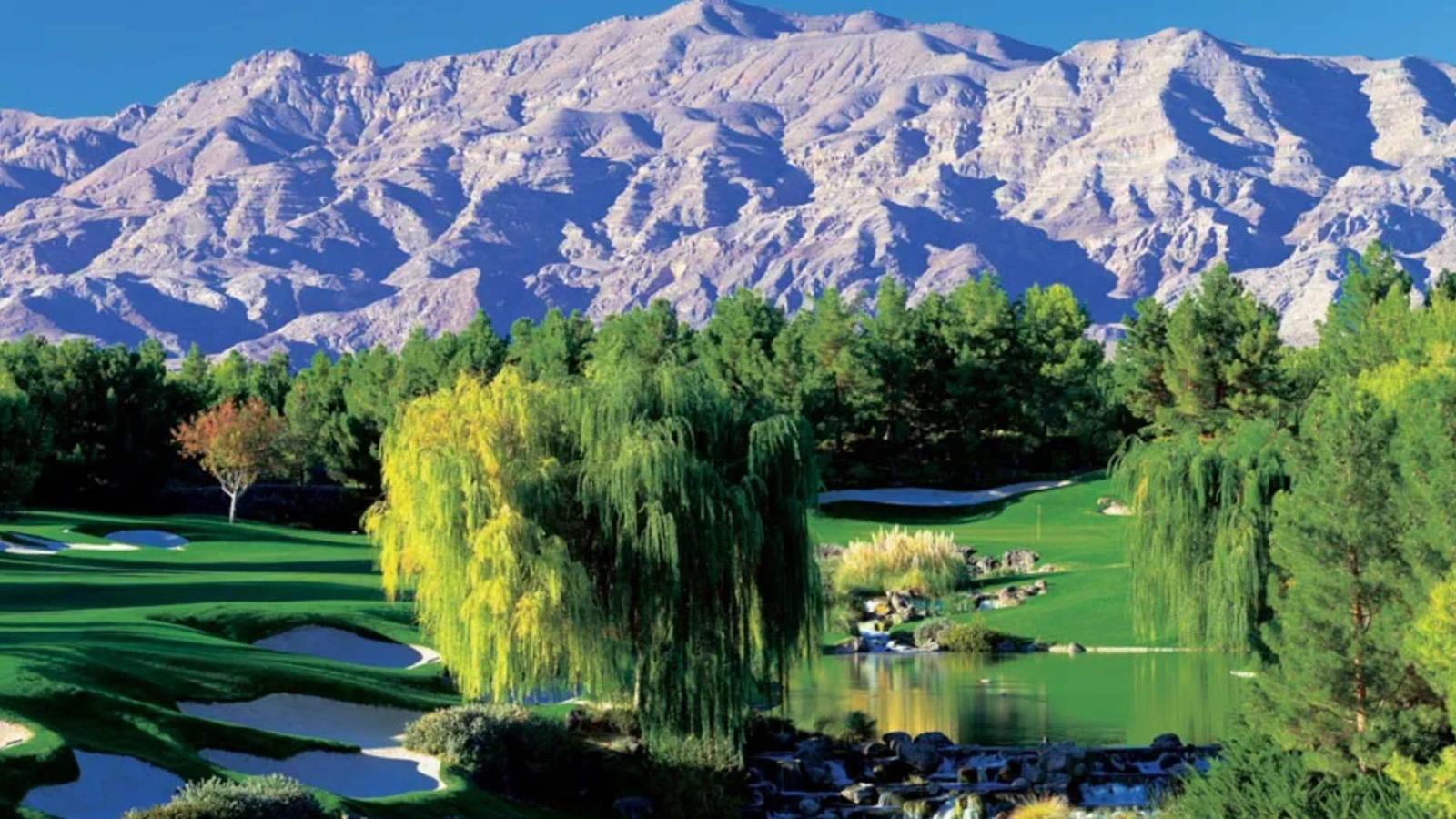 You may not be able to tell from the picture above, but this lush 18-hole course is situated between an auto repair shop and a 7/11 in Las Vegas, Nevada. What’s the catch? This luxurious golf course was built in the middle of the desert by MGM Resorts, a company that owns several casinos and hotels on the Las Vegas Strip. The course is available for all guests of MGM-owned casinos.

The course is designed by Tom Fazio and is constantly featured in the top 10 lists of golf courses. It’s an expensive one, for sure, but to get away to the oasis in Nevada heat and to play the same course Tiger Woods played is worth it.