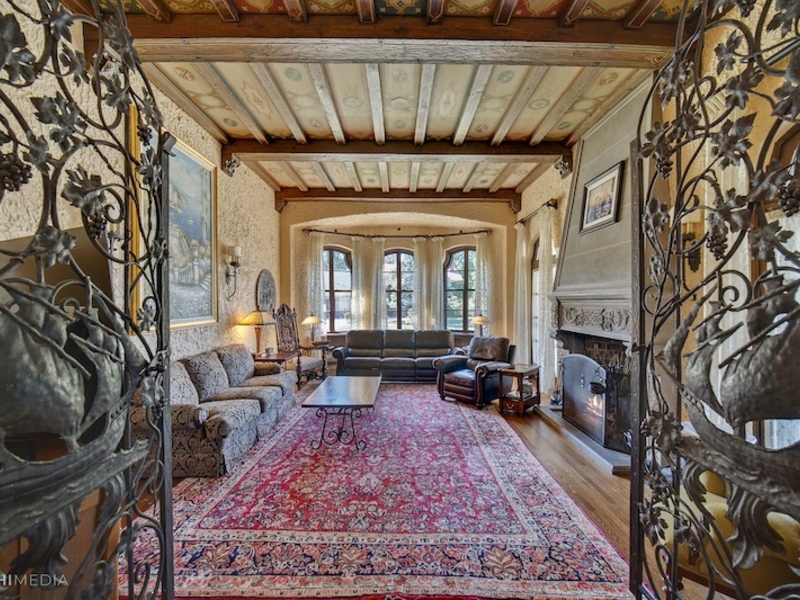 A house in Beverly that looks like a small castle has sold to a man who had longed dreamed of being its king.

Built in 1930, the house has a limestone colonnade outside dotted with carved medallions, and inside, a medieval-style living room with a large, carved fireplace, a ceiling with ornamental patterns painted between the wood beams and rough-textured plaster walls.

“I grew up in Evergreen Park (just west of Beverly) and I’ve driven past that house thousands of times and always admired it,” said Tom Fiske, who paid a little under $965,000 on Jan. 12 for the five bedroom-house on Seeley Avenue.

Fiske, who’s in accounting and until this week’s purchase lived in Ravenswood, said he wasn’t actively looking for a new home but “I have about give houses in Chicago that I’ve starred on Zillow so if they ever come on the market I’ll know.” The Seeley house was one of them.

When the house came on the market Dec. 4 (after a previous buyer’s contract fell through), Fiske “texted me saying, ‘I have to have that house,’” said Andrea Hebner, the @properties agent who represented him. The house, listed at $975,000, was represented by Bernadette Molloy of Molloy & Associates.

Hebner, who had never seen the house, said when they went to see it “I was in awe. It’s a mini castle.” It’s four blocks from Beverly’s bigger and better known Givins Castle, built in 1887 and now a Unitarian church.

Fiske’s new home is an amalgam of styles, he notes: “It’s Spanish Revival architecture, built out of limestone, which was a popular material for its Art Deco era, and the interior is Gothic.” There is multi-colored tile in the sizable front hall, scalloped doorframes, a twisted newel post on the staircase and wrought-iron gates at the entrance to the living room.

This was all designed by a Chicago architecture firm with a flair for the dramatic: Michaelsen & Rognstad, the architects of two of Chicago’s most vivid buildings from the Roaring Twenties, the gold-topped fieldhouse in Garfield Park and the colorful On Leong Merchants Association building, now the Pui Tak Center, on Wentworth Avenue in Chinatown.

The house was originally a model of sorts, built by Frank Karge, who owned an Indiana limestone quarry and a Chicago firm called Cut Stone Works. Old articles about the house say Karge built it in part to showcase the type of work he could do. Not only is the house Bedford limestone on all four sides but the exterior is detailed with braids rendered in stone, medallions emblazoned with generic native American faces, and other emblems.

“It was a show house,” Fiske said. “He was showing what he could build for you.”

Molloy said Karge built the Marquette State Bank building, a stately, pillared limestone building at 63rd and Western, and at least one other bank in the city. Fiske said Karge provided the limestone for the fireplaces in the University Club in the Loop.

Karge apparently lost the house in the Great Depression, when a steep downturn in building would have cut into his stone business.

The owners prior to Fiske updated the kitchen, baths and secondary rooms. In the main bathroom, they used multi-hued tile that is in keeping with the home’s original finishes. The house is about 3,200 square feet and the lot about 11,800 square feet, or 3.75 times the square footage of a standard 25-by-125-foot Chicago lot.

According to Midwest Real Estate Data, the home’s sale price, $964,600, is the highest anyone has paid for a house in Beverly since November 2018, when a home on Longwood Drive went for $1.12 million.