Tough security measures are being put in place across Washington DC ahead of Joe Biden‘s inauguration, including bringing in at least 10,000 National Guard troops, erecting new anti-climb fences around the Capitol and White House and the closure of national monuments.

The increased security measures are now being implemented earlier than scheduled in the wake of last week’s deadly attack on the US Capitol by violent Trump-supporting rioters.

It comes as Donald Trump declared a state of emergency in DC and authorities revealed three separate plots to attack the Capitol ahead of the inauguration, including one described as the ‘largest armed protest in American history.’

Extremists are using the encoded app Telegram to coordinate and plan, NBC reported on Tuesday.

Some are sharing knowledge of how to make, conceal and use homemade guns and bombs in advance of the inauguration.

The messages are being posted in Telegram chatrooms where white supremacist content has been freely shared for months, but chatter on these channels has increased since extremists have been forced off other platforms.

A U.S. Army field manual and calls to ‘shoot politicians’ and ‘encourage armed struggle’ have been posted in a Telegram channel that uses ‘fascist’ in its name.

Chris Sampson, chief of research at the defense research institute Terror Asymmetrics Project on Strategy, Tactics and Radical Ideologies, told NBC his group has alerted the FBI about it.

‘Some channels merely swap information, but then they accelerated into conversations of where to be.’

Officials are promising extremely tight security around the entire capital region – some of which is already being put in place. The beefed up security will include increased law enforcement, extra checkpoints, fencing and barricades across the city.

The public is now banned from entering the Capitol grounds and the inauguration will be a ticketed-only event. Anti-climb fences have also now been installed around the Capitol building.

Access to the Washington Monument is also now prohibited for the next two weeks due to ongoing threats. Security fences were also erected outside the Lincoln Memorial on Monday.

Public access to roads, parking areas and restrooms on the National Mall, which is where crowds of supporters usually gather during inaugurations, may be shut down this week if deemed necessary. 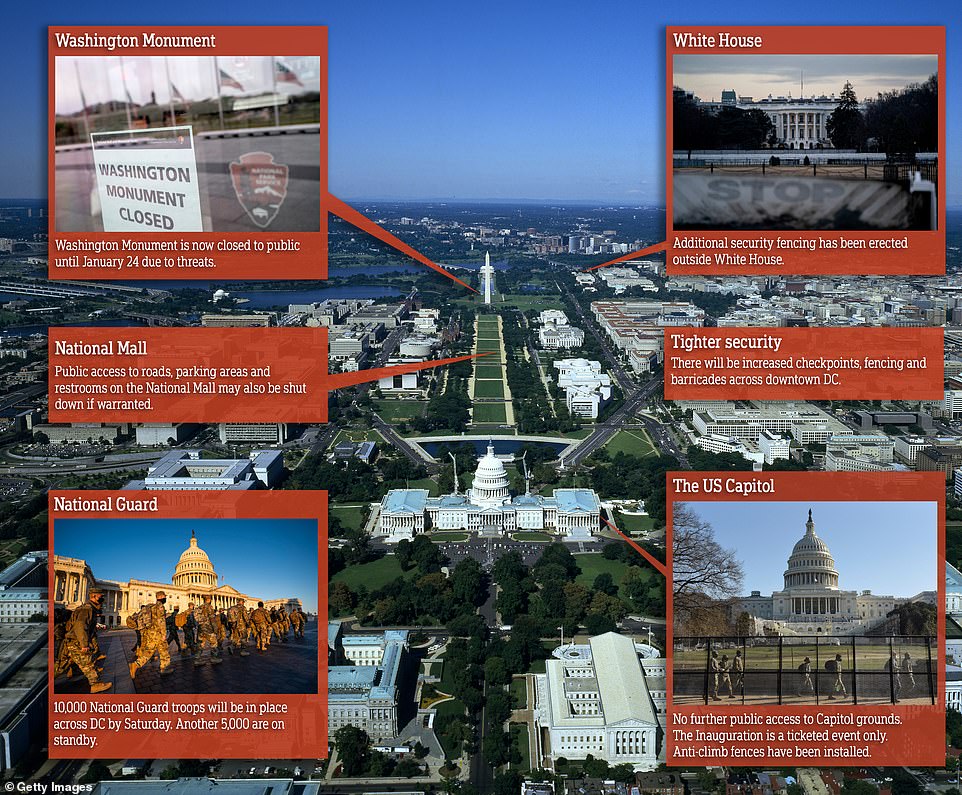 Tough security measures are being put in place across Washington DC ahead of Joe Biden’s inauguration, including bringing in at least 10,000 National Guard troops, erecting new anti-climb fences around the Capitol and White House and the closure of national monuments

It is not yet clear what road closures are being put in place or how far out from the Capitol checkpoints will be set up. Authorities haven’t yet confirmed how close members of the public will actually be able to get to the official event even though they are being asked to stay away given the COVID-19 pandemic.

While next week’s event was already going to be pared down because of COVID-19, authorities say the increased security means Biden’s inauguration will look drastically different to previous ones.

The National Guard has been authorized to send up to 15,000 troops to Washington to safeguard the capital.

At least 10,000 of those troops will be in place by Saturday with the remaining 5,000 on standby.

There are already 6,200 troops on the ground in DC in the wake of last week’s MAGA mob violence.

Plans are still on for a major public art display spanning multiple blocks of the National Mall that will feature 191,500 US flags and 56 pillars of light. The display is meant to symbolize every US state and territory and ‘the American people who are unable to travel’ to the capital to celebrate given COVID restrictions.

The inauguration is being held at the same spot at the US Capitol where the violent MAGA mob rioters overran law enforcement last week and stormed the federal building.

US Secret Service special agent in charge Michael Plati, who is leading the inauguration security, insists such security breaches won’t occur at the January 20 inauguration.

Some of the heightened security measures will be obvious: officers in uniforms, checkpoints, metal detectors and fencing.

But he says some won’t be so obvious. 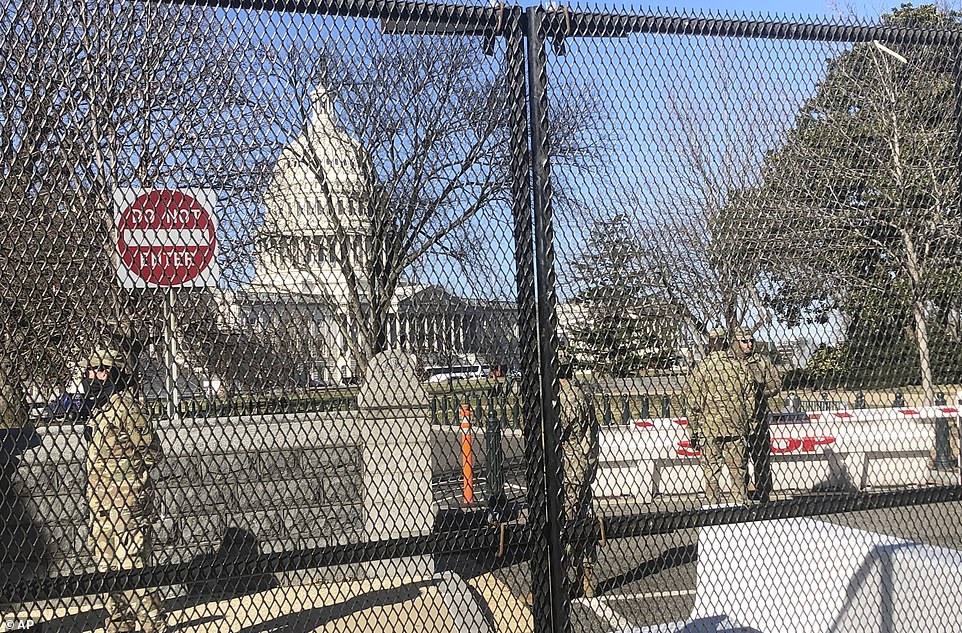 US CAPITOL: The public is now banned from entering the Capitol grounds and the inauguration will be a ticketed-only event. Members of the National Guard stand inside an anti-scaling fencing that now surrounds the Capitol 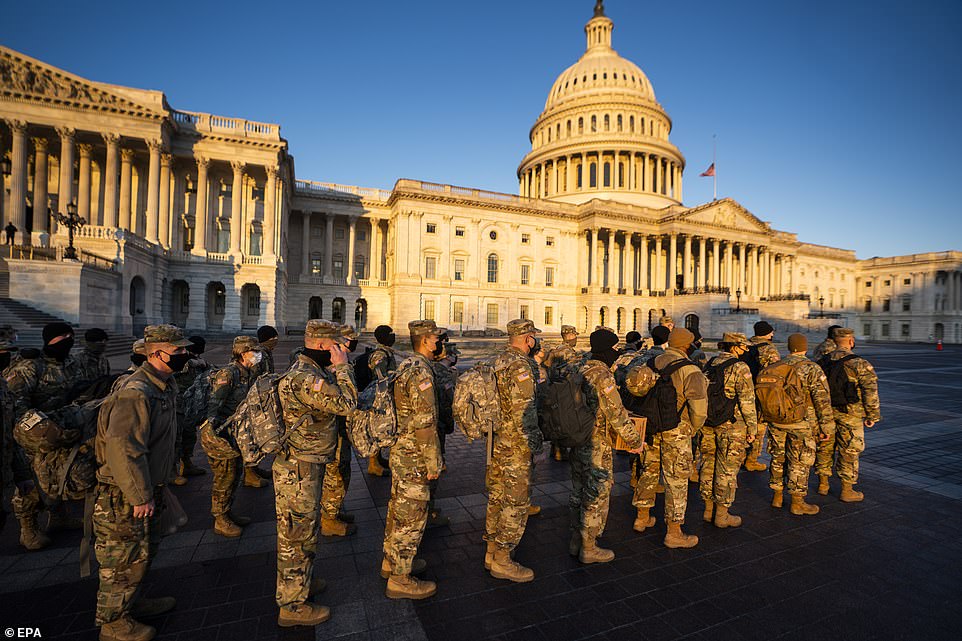 NATIONAL GUARD: The National Guard has been authorized to send up to 15,000 troops to Washington to safeguard the capital. At least 10,000 of those troops will be in place by Saturday with the remaining 5,000 on standby. There are already 6,200 troops on the ground in DC in the wake of last week’s MAGA mob violence

While law enforcement never go into too much detail about security so would-be attackers aren’t tipped off, Plati said they’ve taken into account the siege.

‘It’s a poignant reminder of what can happen.’

Plati said last week’s Capitol siege and the inauguration aren’t even comparable from a security standpoint.

The inauguration is designated as a ‘national special security event,’ which clears the way for communication, funding and preparation between multiple agencies in Washington, like the Capitol Police, Pentagon, Homeland Security and District-area police.

Other such events are the State of the Union, the Super Bowl and the Democratic and Republican National Conventions.

Last week’s rally turned violent siege was viewed as a free speech event in the days before, despite multiple warnings about the potential for violence from right-wing extremist groups.

Egged on by Trump, the violent mob marched from the White House to the Capitol, where they occupied the building for hours to try to stop lawmakers from certifying Biden’s win.

One of the main problems last week was a lack of coordination by multiple agencies in the district, which won’t happen this time because those agencies have already been approved to work together and have been doing so for months, Plati said.

‘We will have the adequate resourcing, personnel and plans in place,’ he said.

Plati said the event is planned over a year with contingencies and they anticipate the possibility of extreme violence.

‘There’s a variety of methods to ensure that we have a secure, seamless, safe environment for our protectees but most importantly, the general public,’ Plati said. 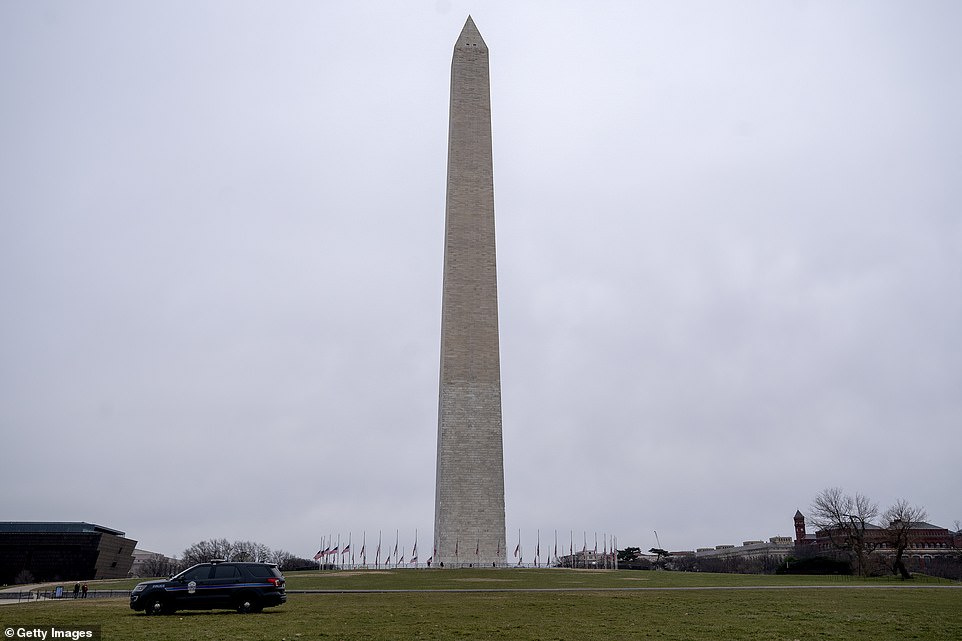 WASHINGTON MONUMENT: Access to the Washington Monument is also now prohibited for the next two weeks due to ongoing threats. National Parks Police patrolled the monument on Monday 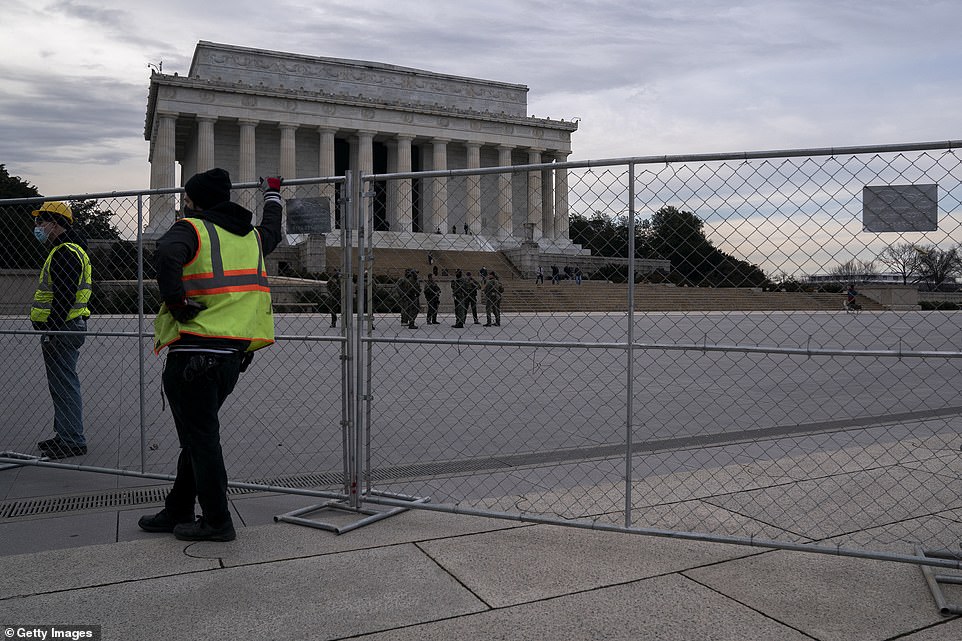 LINCOLN MEMORIAL: Security fencing was installed around the Lincoln Memorial on Monday ahead of the inauguration 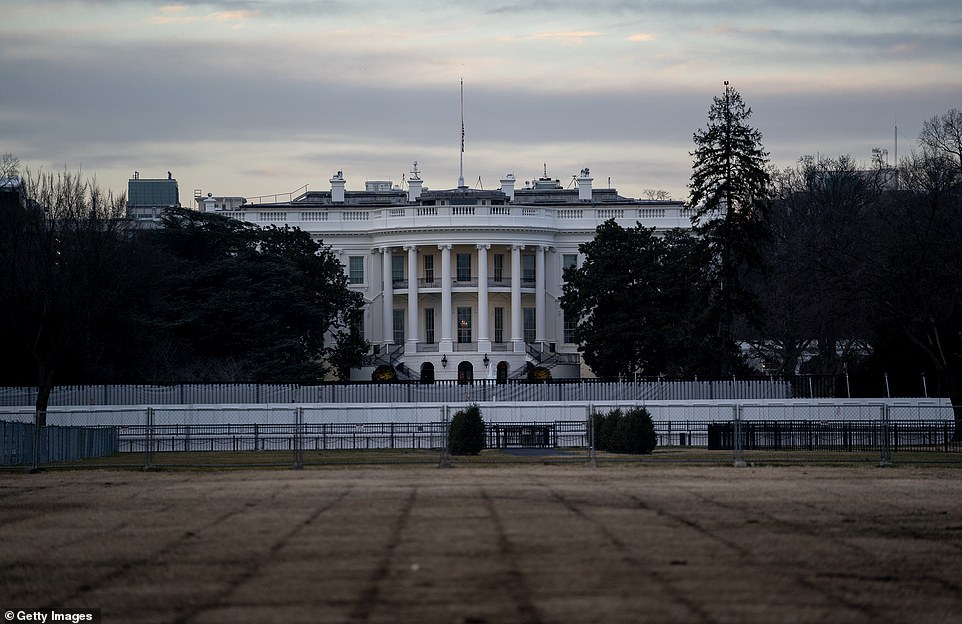 WHITE HOUSE: Additional security fences were installed around the White House in the wake of the MAGA mob riots

After Biden is officially inaugurated, he, Vice President Kamala Harris and their spouses will lay a wreath at the Tomb of the Unknown Soldier in Arlington National Cemetery.

They will be joined there by former Presidents Barack Obama, George W. Bush and Bill Clinton and their wives.

Plati said they’re prepared for the group to shift to Arlington – and for the possibility of threats to shift with them.

The Department of Homeland Security is setting increased inauguration security measures in motion earlier than scheduled, citing an ‘evolving security landscape’ leading up to the event.

DHS Secretary Chad Wolf said on Monday, just hours before he announced his resignation, that he’s moved up the timing of the national special security event for Biden’s inauguration to Wednesday instead of January 19.

He cited the ‘events of the past week,’ along with an evolving security landscape.

Acting US Capitol Police Chief Yogananda Pittman said in a statement on Monday that officials have ‘comprehensive, coordinated plans’ in place to ensure safety and security.

It comes after Pittman told House Democrats that authorities were looking into three further plots to attack the Capitol , including one described as ‘the largest armed protest ever to take place on American soil.’

The most concerning is said to involve armed rioters encircling the Capitol and blocking Democrats from entering – killing them if necessary – so that Republicans can take command of government.

Another protest is being planned in honor of Ashli Babbitt, the USAF veteran who was shot at point blank range by a police officer as she tried to clamber into the Speaker’s Lobby during the Trump mob’s siege.

An FBI internal memo warned of a group that was calling for the ‘storming’ of state, local and federal government buildings, as well as court houses if Trump is removed from office.

Editorial Team
18 January 2022
3 Cloud Security Trends to Watch in 2022 Many organizations have cloud security on their minds going into 2022. In...

Editorial Team
18 January 2022
The official Beijing 2022 playbook tells people to download the My 2022 application at least 14 days before heading to...

Editorial Team
18 January 2022
HONG KONG, Jan 18 (Reuters Breakingviews) - Investors have watched the movies, bought the cosmetics and got hooked on its...

Editorial Team
18 January 2022
A working group will be formed to address security and mental health concerns in parts of the city. That staff...