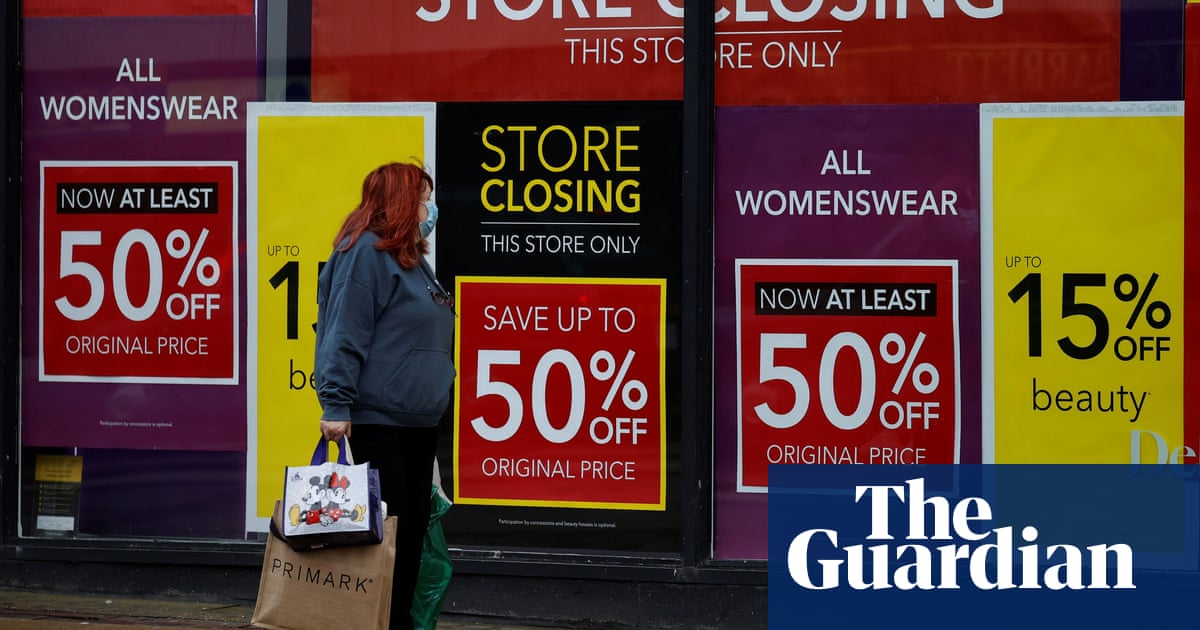 The high street shed 177,000 jobs in 2020 according to a study that predicts an even more devastating toll on retail jobs this year, with a further 200,000 expected to be lost.

The job losses in what is the UK’s biggest private employment sector – with particular importance for women – illustrate the dramatic and permanent impact the pandemic will have on the shopping landscape.

The figure equates to 3,400 jobs lost every week in 2020, according to the new figures from the Centre for Retail Research (CRR) published on Friday. With Debenhams and Sir Philip Green’s Arcadia group among 2020’s high-profile casualties, the CRR described 2020 as one of the most troubled periods for the UK high street over the past 25 years.

About 15,700 stores closed their doors permanently, with Joshua Bamfield, the CRR’s director, predicting that up to 200,000 more jobs could disappear in 2021 as the big shift to online shopping during lockdown means yet more tough decisions about the future of stores.

“Our forecast is based upon a number of factors such as the cumulative effects of months of closure and its impact upon cashflow and rent arrears that will be payable when the moratorium ends,” said Bamfield, “while the longer-term effects of the greater use by shoppers of all kinds of online retailing is likely to be hugely damaging for physical stores.”

In 2020 half of employees working for retailers that went bust lost their jobs, which is a bigger proportion than during the 2008 recession, when it was about a third, said the CRR. The majority of the job losses were the result of store closures as independents shut and big chains scaled back their physical presence. In a sign of the times, the rescue deals brokered for the likes of Oasis, Warehouse and Cath Kidston jettisoned all their stores.

The continued hollowing-out of the high street is eliminating entry-level retail jobs – positions such as sales assistant and checkout operator – which have traditionally been held by women, whereas jobs in growth areas related to e-commerce, such as van driving, are going more to men.

The Fashion and Textile Children’s Trust (FTCT), a hardship charity that assists children whose parents work in the retail sector but are struggling to make ends meet, said it was “braced” for a flood of requests for help. During 2020, the number of inquiries for its grants increased by nearly 50% to 3,400.

Anna Pangbourne, the FTCT’s director, said the charity had handed out a record amount of financial support during the health crisis, helping more than 1,000 children with grants totalling £520,000.

“This year has been challenging for everyone, but has also shown how vulnerable some families are to sudden changes in financial circumstance, such as furlough or redundancy,” said Pangbourne. “We have heard from families who have had to choose between paying the rent or buying their children’s uniform for school.”

In the wake of Debenhams slumping back into administration in April, the FTCT has given grants worth £48,000 to staff made redundant by the chain. Debenhams, which still employs 12,000 people, although many of them are furloughed, is in the middle of a closing down sale with a potential rescue by Mike Ashley’s Frasers Group the chain’s last hope.

Pangbourne said most of the families it worked with were unable to save even when they were earning their full salary “so when faced with furlough, reduced pay or redundancy, they’ve had to make some very hard choices”. Its grants are for essentials such as domestic appliances, school uniforms and home learning kit.

The total number of retail jobs lost in 2020 was up by almost a quarter on the 143,100 recorded for 2019. Last year Sainsbury’s, Marks & Spencer, Boots and John Lewis were among the major store groups to announce big job cuts.

Tightening restrictions on the back of rising coronavirus infection rates mean non-essential retail stores are now closed in three of the four home nations: Scotland, Wales and Northern Ireland. The move to tier 4 rules has also shut two-thirds of English stores.

Lost Christmas sales, coupled with the end of government emergency support, such as the business rates holiday, means retailers are facing tough financial decisions. Robert Hayton, head of property tax at real estate adviser Altus Group, said there was a “real risk” that some of the hundreds of thousands shops forced to close would not reopen.