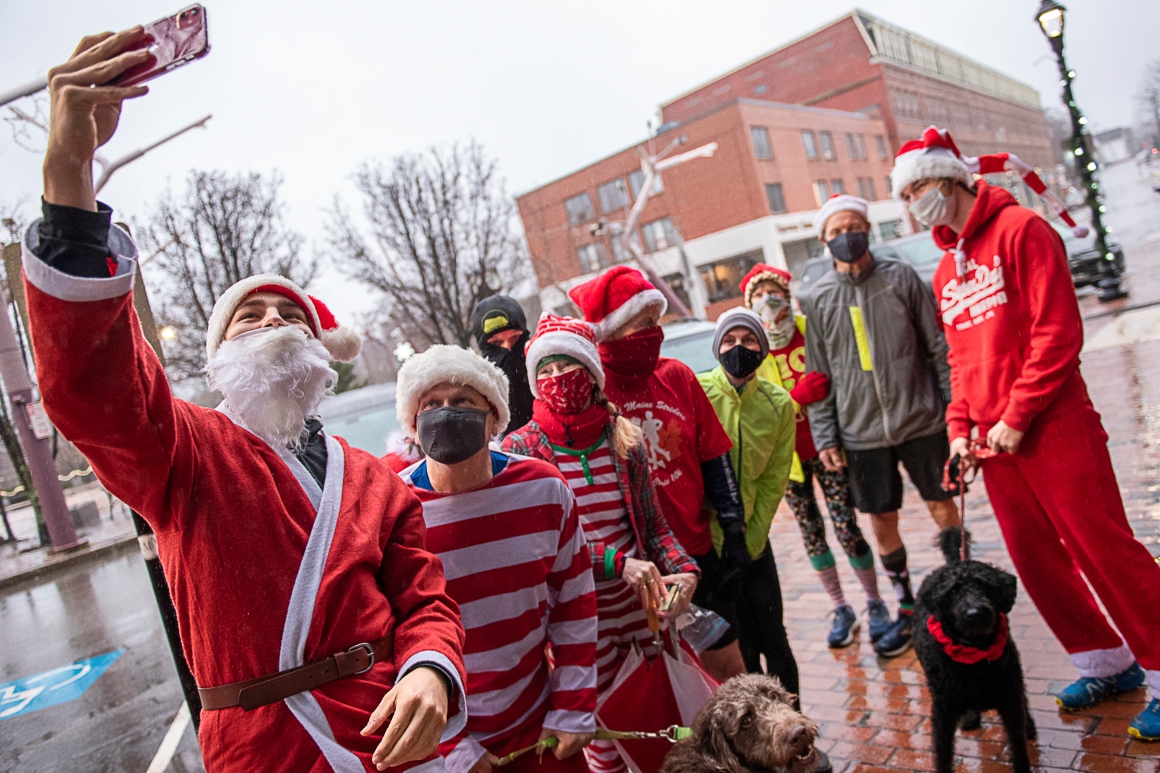 “This year Christmas love is expressed at the door,” she said. “I’m glad that people will probably be with us next year with the vaccines. I can give up anything for that.”

With a child due in February, Song Ju-hyeon of Paju, South Korea, near Seoul, said home is the only place she feels safe. The government reported 1,241 new cases Friday, a new daily record for the country.

“It doesn’t feel like Christmas anyway, there’s no carols being played on the streets,” she said.

“It’s Christmask,” the Daily Nation newspaper declared in Kenya, where a surge in cases led to doctors ending a brief strike Christmas Eve. Celebrations were muted in the East Africa hub as a curfew prevented overnight church vigils.

Pope Francis delivered his Christmas blessing from inside the Vatican, breaking with his traditional speech from the balcony of St. Peter’s Basilica to tens of thousands in St. Peter’s Square. Tourism in Italy has virtually vanished and the government’s coronavirus restrictions for the holidays foiled any plans by locals to flock to the square.

Citing a cause for optimism, Francis said the invention of Covid-19 vaccines shines “lights of hope” on the world. In a passionate appeal to leaders, businesses and international organizations, he said they must ensure that the most vulnerable and needy in the pandemic be first in line to receive the vaccines.

Bells rang out around Bethlehem as the traditional birthplace of Jesus celebrated. But the closure of Israel’s international airport to foreign tourists, along with Palestinian restrictions banning intercity travel in the areas they administer in the Israeli-occupied West Bank, kept visitors away.

With economies reeling around the world, it wasn’t a year of lavish gifts. Robin Sypniewski of Middlesex County, New Jersey, was furloughed twice from her job serving school lunches and is now on reduced hours as her husband retires next week as a trash collector and her daughter wrestles with student debt.

Sypniewski, 58, bought her daughter pajamas, compared to a diamond bracelet last Christmas. Her husband got a $20 plaque describing his Polish heritage, compared to a tablet computer last year.

“The bills have to be paid this month and next month. With the reduced hours, it’s tough,” she said.

In Sao Paulo, Brazil, taxi driver Dennys Abreu, 56, navigated the vast city overnight to cover the $300 monthly payment on his car, which he bought after losing a construction job. An estimated 14 million Brazilians are jobless.

“All I can do is to work as much as I can, get by and hope this damn virus disappears next year,” he said.

Church services shifted online. The Catholic Archdiocese of Los Angeles celebrated five Masses at the Cathedral of Our Lady of the Angels, with attendance capped at 130 people, compared to a pre-pandemic capacity of about 3,000. All were livestreamed.

The Chapel of the Cross in Chapel Hill, North Carolina, stuck with five services but in-person attendance was capped at 25 people, compared to as many 2,000 before the pandemic. A Christmas Eve pageant that is normally performed in person was recorded and shown online.

“I have to remember that Christians have been celebrating Christmas for hundreds of years in all sorts of circumstances,” said the Rev. Elizabeth Marie Melchionna, the church rector. “Some of the external appearances are different and yet the essence remains the same. What has not changed is that essential longing and celebration for love that is born at Christmas.”

In Paris, members of Notre Dame Cathedral’s choir sang inside the church for the first time since a 2019 fire, wearing hard hats and protective suits against construction conditions.

Border closures and bottlenecks foiled some plans. Thousands of drivers were stranded in their trucks at the English port of Dover, lacking the coronavirus tests that France demands amid rising concern about a new, apparently more contagious, virus variant. The British army and French firefighters were brought in to help speed up the testing and free food was distributed.

With Colombia closing its borders to prevent the virus from spreading, Venezuelan migrants couldn’t go home for the holidays. Yakelin Tamaure, a nurse who left economically-wracked Venezuela two years ago, wanted to visit her mother, who is nursing a broken foot.

“I try to send her money, but it’s not the same as being there,” she said.

Many took the restrictions in stride. A pre-pandemic Christmas in Ann Arbor, Michigan, for Kristin Schrader, 53, meant hosting a big dinner with appetizers for her brother who visits from Denver, her parents, who live in town, and friends who drop by. This year, she opted for a socially-distant outing with her husband and 13-year-old daughter to watch a man dressed as Santa Claus canoe down the Huron River with his dog. A low-key fondue dinner was also on the agenda.

“It’s just really hard when you’ve all be sitting in the same house to muster up a lot of excitement for the three of us when we’re just staring at each other for months and months on end,” she said.

The 70 residents at St. Peters, a nursing home in the northern Spanish town of El Astillero, held video chats or 30-minute visits with family, separated by a plexiglass wall.

“This terrible thing has come to us, so we must accept it and deal with it with patience,” said Mercedes Arejula, who met with her mother.

The nursing home allowed only one relative inside. A granddaughter blew kisses from outside.