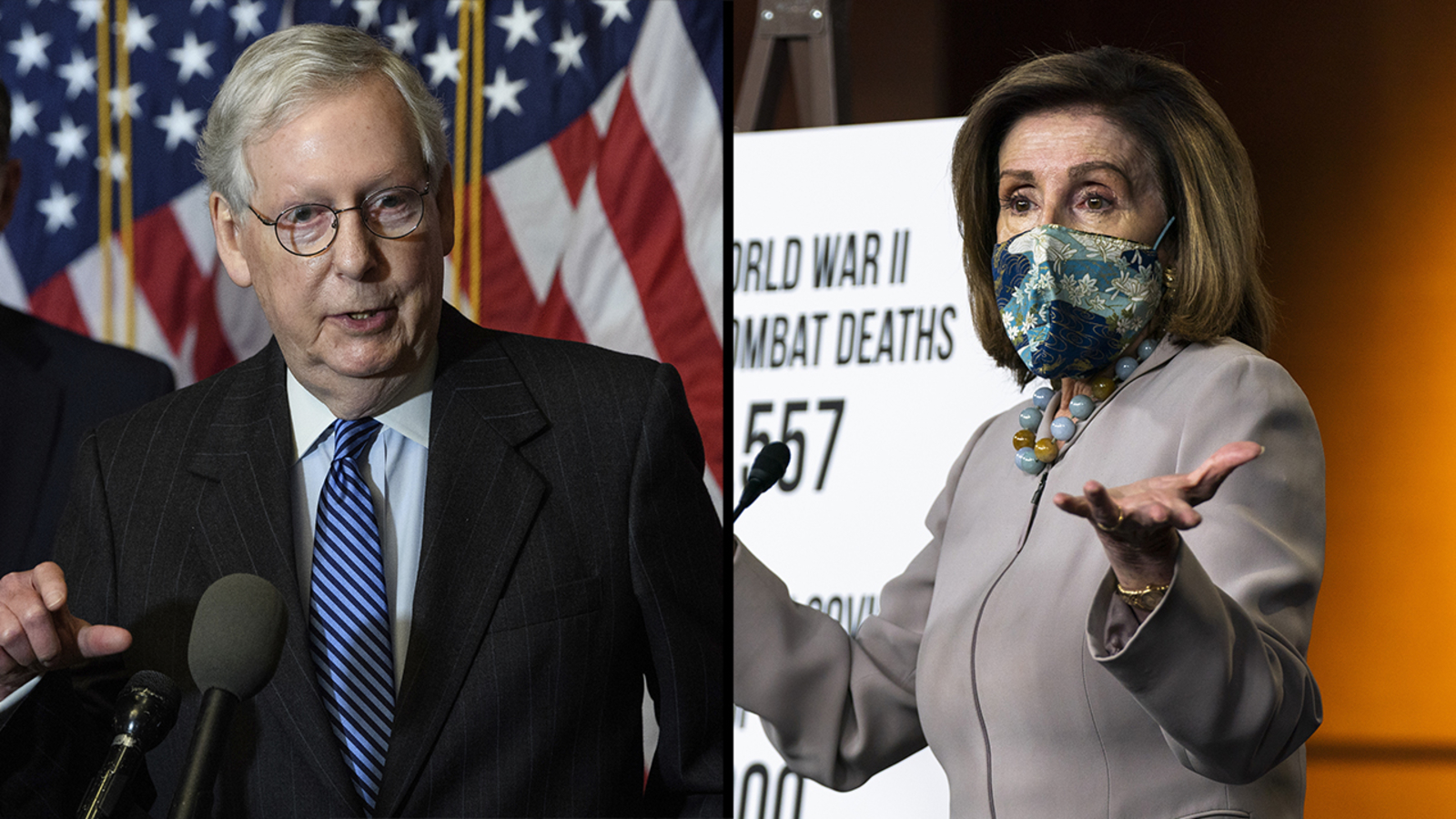 WASHINGTON — Congressional leaders, after months of a bitter stalemate and as millions of Americans have been eager for relief, are finally indicating they’re nearing a deal on a new rescue package that could pass both chambers within days.

The price tag for a stimulus deal could be close to $900 billion, a source familiar tells CNN, though more details could be out later Wednesday.

The deal is expected to include a new round of stimulus checks at $600 per individual, but no money for state and local aid, a priority Democrats had pushed for, and no lawsuit protections, which Republicans wanted.

The measure is also expected to include an additional $300 a week in jobless benefits as well as up to $330 billion for small business loans and money for vaccine distribution.

But there are still provisions drawing pushback, including a Democratic push to include $90 billion in aid to states that would be administered by the Federal Emergency Management Agency.

Senate Majority Whip John Thune told CNN that if that’s “simply a way of disguising money for state and local governments, it will have a lot of opposition.” He said it depends on how its structured.

Even as talks are moving in a positive direction towards a deal, congressional leaders are still trading offers and going back-and-forth this morning as they try to finalize a proposal and jam it through Congress in days, several sources told CNN.

That means it’s still highly uncertain when Congress will vote — and whether they will be able to tie the roughly $900 billion relief plan to a massive $1.4 trillion spending bill that Congress is trying to pass by the time the government runs out of money Friday night. Whether Congress will have to pass another stop-gap measure to keep agencies afloat remains to be seen.

On a conference call Wednesday, Senate Majority Leader Mitch McConnell suggested that votes on final passage could slip into the weekend, and he prepared his members to be ready for that possibility.

If that happens, it’s possible there could be a temporary government shutdown until final passage since government funding runs out Friday night, and they are planning on tying the Covid relief package to the funding bill. Congress may have to pass a short-term stop-gap measure to prevent that from happening.

The stimulus proposal in the works amounts to about twice the amount that Senate Republicans have been proposing, but it is a fraction of what House Speaker Nancy Pelosi had been demanding for months. Before the election, Pelosi had held out for a deal worth $2.2 trillion, but now she is willing to back a much smaller proposal, arguing that they will have another opportunity to push for more aid when Joe Biden assumes the presidency.

MORE: 10,000 restaurants expected to close in the next 3 weeks because of COVID-19

McConnell said in a floor speech Wednesday morning that Hill leaders have “made major headway toward hammering out a targeted pandemic relief package that would be able to pass both chambers with bipartisan majorities,” and said, “we agreed we will not leave town until we’ve made law.”

The struggle to get the stimulus package done also looms over the Georgia Senate runoff races that will determine which party controls the chamber next Congress. During the call with GOP senators, McConnell noted that direct payments for individuals and families have become a major issue in the race.

“Kelly and David are getting hammered” on the issue, he said, according to a source who heard his remarks, a reference to incumbent GOP Sens. Kelly Loeffler and David Perdue, who are both facing off against Democratic challengers.

On a conference call with House Democrats this morning, Pelosi signaled that the deal isn’t final yet but offered the general outlines of the proposal. There wasn’t a lot of pushback on the call, and sources described the atmosphere on the call as positive.

Pelosi blamed GOP insistence on lawsuit protections for businesses and others as a reason why state and local aid was not included in the proposal. She did point to other areas of the emerging proposal — school funding, vaccine distribution and transportation projects — where states and localities would get money. She contended that Democrats will push again for state and local aid when Joe Biden assumes the presidency.

Rather than giving direct aid to states, Hill leaders are looking at a $90 billion fund that would be administered by FEMA for aid to states and cities, senators say.

“Does it affect our vote count? Probably,” Thune cautioned.

Thune also said “some of our folks won’t like” $300 in weekly jobless benefits, but others will — and noted that “personal checks create concerns among some GOP members.”

Thune also said they appear to have upped the small business loans to $330 billion in this package, which Republicans support.

Once details are formally unveiled, Hill leaders will have to sell the plan to their caucuses and try to ram it through Congress quickly — all with the threat of a shutdown looming at the end of the week.

It won’t be an easy task. But top Democrats and Republicans expressed confidence Tuesday evening after the big four leaders met for the first time in months, emerging to say that a deal is finally in sight. But they refused to share any details.

How the legislative process could play out

Once it is finalized, leadership from both parties will have to brief the rank-and-file to sell them on the agreement and then move as quickly as possible to hold a vote in both chambers.

Negotiators are up against the clock ahead of a Friday at midnight deadline when government funding expires, and barring any major last-minute snags, lawmakers could be on track for a vote in the House on Thursday followed by a vote in the Senate on Friday. They would need unanimous consent from all 100 senators to schedule a vote, meaning if any senator objects, there could be at least a temporary government shutdown over the weekend.

Negotiators are likely to introduce a $1.4 trillion government funding package later Wednesday. Then, when the House Rules Committee meets to tee up a House vote, an amendment will be offered to tack on the Covid relief deal before sending the full package to the floor.

Once a vote takes place in the House, there will be little time left on the calendar before a potential shutdown is triggered.

With such a narrow margin for error, get ready for rank-and-file members to attempt to exert influence on the process in an effort to win concessions.

If a quick Senate vote is blocked, there could be a brief government shutdown over the weekend. And if lawmakers fail to imminently finalize a massive government spending bill for a new fiscal year, there is also a chance they could be forced to revert to a short-term funding patch instead, though lawmakers in both parties have made clear they don’t want that to happen.

It’s not yet clear how much buy-in a deal will get from the rank-and-file on both sides of the aisle, but there will likely be GOP concerns about the price tag.

Sen. Ron Johnson, a Republican of Wisconsin, said “probably” when asked if it was too much money.

GOP Sen. Rand Paul, however, signaled Wednesday that he won’t stand in the way of a quick Senate vote.

“We probably won’t object to the time limitations on it,” the Kentucky Republican told reporters.

While the emerging proposal is expected to include a new round of stimulus checks, the expected amount is not as much as what’s being pushed by House progressives, Sen. Bernie Sanders and at least one Republican, Sen. Josh Hawley of Missouri.

Sanders, who has been demanding $1,200 in checks, praised the emerging proposal for including stimulus checks even though it’s expected to be in the range of $600-$700 range for individuals. He said he would keep demanding more, but he wouldn’t say if he would object or slow down the deal to prevent it from passing by Friday.

“Two weeks ago … there was virtually no discussion about direct payments,” Sanders said. “So I’m proud of the progress that we’ve made … I’m gonna continue to fight for more. Because people are in trouble right now and they need help, but it’s a good start.”