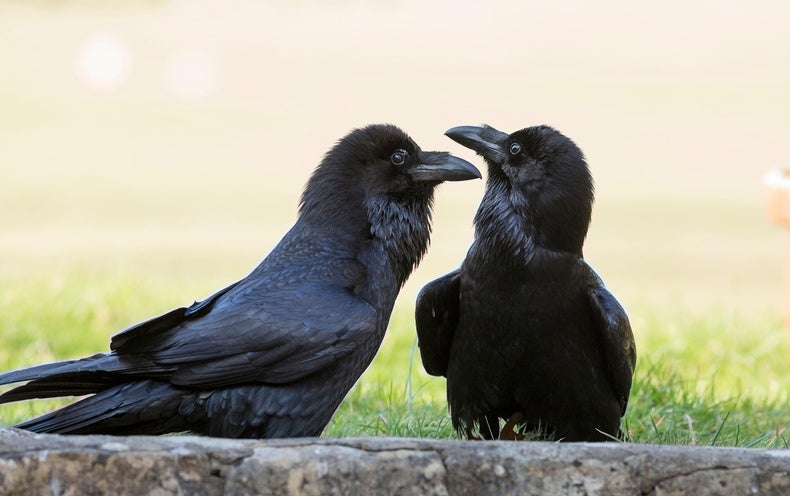 Scientists and casual observers alike have known for years that ravens and their corvid relatives are extremely smart. But most studies use single experiments that provide a limited view of their overall intelligence. “Quite often, in single tasks, you’re just testing whether the bird can understand that you’re hiding something,” says Simone Pika, a cognitive scientist at Osnabrück University in Germany.

A new study that that tries to address that deficit provides some of the best proof yet that ravens, including young birds of just four months of age, have certain types of smarts that are on par with those of adult great apes. The brainy birds performed just as well as chimpanzees and orangutans across a broad array of tasks designed to measure intelligence. “We now have very strong evidence to say that, at least in the tasks we used, ravens are very similar to great apes,” says Pika, lead author of the study. “Across a whole spectrum of cognitive skills, their intelligence is really quite amazing.” The findings, published in Scientific Reports, add to a growing body of evidence indicating that impressive cognitive skills are not solely the domain of primates but occur in certain species across the animal kingdom.

In their new work, Pika and her colleagues turned to a large group of tests that study co-author Esther Herrmann of the Max Planck Institute for Evolutionary Anthropology in Leipzig, Germany, originally developed in 2007 to investigate cognitive performance in great apes and human children. Herrmann’s method measures general performance across a range of social and physical tasks rather than just one specific aspect of cognitive reasoning, as most prior approaches did. Herrmann and other scientists have used her now well-established technique to make additional cross-species comparisons in monkeys, dogs and parrots.

Pika, Herrmann and their colleagues adapted and administered the same suite of tests to eight hand-raised ravens. The assays consisted of nine physical categories and six social ones, which were individually comprised of up to four different tasks repeated multiple times each. “We tried to have many tasks in many domains to have a comprehensive understanding of what ravens can do,” Pika says. “It was so much work!”

Physical tests measured the birds’ abilities to track objects in space and to understand numbers. For example, researchers placed a reward under a certain cup and then moved that cup around with several others to see if the ravens could track which one contained the reward. Under the social test umbrella, the researchers measured how well the birds could follow cues given by an experimenter. The human signaled which cup contained a reward by looking or pointing at it, for instance, or showed the ravens how to access a reward and then observed whether they were able to apply what they observed.

Ravens understand that objects can change their locations. Here, the experimenter switched the position of the cup that contained bait with an empty cup. That task was an easy one for the raven; it quickly found the cup with the bait and its just reward was forthcoming. Credit: Miriam J. Sima

The authors repeated the same 33 tasks for each raven at four, eight, 12 and 16 months of age. They were surprised to find that by just four months old, the birds had mastered most tasks—to the point that, almost across the board, the young ravens’ results compared similarly to those of adult chimpanzees and orangutans that Herrmann had previously tested. “We didn’t expect that they’d master these tasks so quickly,” Pika says. She and her colleagues suspect that ravens’ cognitive development must be fast-tracked because they begin interacting more with their ecological and social environment at about four months of age. (Based on earlier studies comparing human performance against that of other apes, Herrmann surmises that children who are 2.5 years old would outperform ravens in social cognition tasks but would be about equal to the birds for most of the physical cognition tests.)

In some ways, the findings about raven intelligence are expected, but they are important in terms of validating the birds’ cognitive performance, says Claudia Wascher, a behavioral ecologist at Anglia Ruskin University in England, who was not involved in the research. “Great apes and primates in general have, for quite a long time now, been praised for their ‘extraordinary’ cognitive abilities, but we now find that other taxa, including birds, show similar cognitive performance,” she says. “In order to fully understand the evolution of cognitive abilities in nonhumans, we need much broader comparisons like this study in ravens. And we need to test many more species.”

While the new study provides some of the strongest evidence to date that ravens, like primates, possess a flexible, strong general intelligence, Pika points out that there are some important caveats. She and her colleagues only worked with eight birds. And the cognitive challenges the ravens were presented with in the captive environment differ from those they would face in the wild. The ravens in the study, for example, did not do as well as expected on spatial tasks—which was a surprise, given that birds spend their life navigating large areas by wing.

The ravens could have also been thrown off because they were interacting with humans rather than members of their own species (or a closely related species, in the case of great apes and human handlers). “Ravens are quick learners, and these ones had been hand raised by humans, but there still is a dinosaur-mammal void between the species, which has to be overcome,” says Mathias Osvath, a cognitive scientist at Lund University in Sweden, who was not involved in the research. “Imagine having raven demonstrators for human toddlers or great apes. How would they perform?”

If anything, he says, the new study might underestimate raven intelligence—and is a further testament to their flexible social skills.