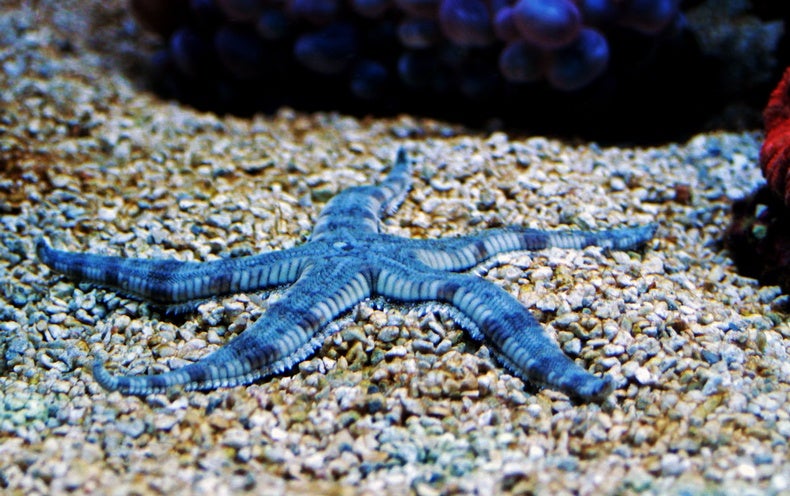 When a male sand-sifting sea star in the coastal waters of Australia reaches out a mating arm to its nearest neighbor, sometimes that neighbor is also male. Undaunted, the pair assume their species’ pseudocopulation position and forge ahead with spawning. Mating, pseudo or otherwise, with a same-sex neighbor obviously does not transfer a set of genes to the next generation—yet several sea star and other echinoderm species persist with the practice.

They are not alone. From butterflies to birds to beetles, many animals exhibit same-sex sexual behaviors despite their offering zero chance of reproductive success. Given the energy expense and risk of being eaten that mating attempts can involve, why do these behaviors persist?

One hypothesis, hotly debated among biologists, suggests this represents an ancient evolutionary strategy that could ultimately enhance an organism’s chances to reproduce. In results published recently in Nature Ecology & Evolution, Brian Lerch and Maria R. Servedio, from the University of North Carolina, Chapel Hill, offer theoretical support for this proposed explanation. They created a mathematical model that calculated scenarios in which mating attempts, regardless of partner sex, might be worth it. The results predicted that, depending on life span and mating chances, indiscriminate mating with any available candidates could in fact yield a better reproductive payoff than spending precious time and energy sorting out one sex from the other.

Although this study does not address sexual orientation or attraction, both of which are common among vertebrate species, it does get at some persistent evolutionary questions: when did animals start distinguishing mates by sex, based on specific cues, and why do some animals apparently remain indiscriminate in their choices?

“What is probably going to get lost in translation for most people is that same-sex sexual behavior doesn’t necessarily equal same-sex sexual orientation,” says Paul Vasey, professor of psychology and research chair at University of Lethbridge, Alberta, who was not involved in the new study. Indiscriminate mating implies a random process between animals that do not transmit any sex-specific signals—whether chemical, sensory or behavioral.

Evolutionary biologists have proposed several explanations for indiscriminate mating attempts that include both same-sex and different-sex sexual behaviors, and Lerch and Servedio’s work adds a new theoretical underpinning to the literature. To predict how time, life span, and sex-specific cues might affect reproductive success, they established a model that had two sexes, one dubbed the “searcher” and one the “target.” They also set some adjustable factors: sex signals from the target could range from “nonexistent” to “always present,” and could be detectable by searchers in a range from “never” to “always.” If the signal were always present and the searcher always detected it, then indiscriminate mating would be nonexistent. But with no signals or weak ones, and with high risks involved in searching, mating with any available partner might tilt the scale toward evolutionary benefit.

The model also suggested an effect involving death and time: for species with short lives, the indiscriminate approach might be the best use of time, maximizing odds of at least one success. Species with the longest lives would likely have more mating opportunities. But indiscriminate mating might benefit them as well—with the luxury of time to take a gamble, these animals might boost reproductive success by taking every mating opportunity that comes along and still be able to compensate for misfires.

Long-lived echinoderms such as the sand-sifting sea star are perhaps an example of the latter. Echinoderms lie just outside the vertebrate family tree and are probably the closest non-bony relatives of animals with backbones. For this reason, scientists often use this animal group as the evolutionary stand-in for a common ancestor of vertebrates. These spiky creatures have rudimentary structures that can detect light, but it is unlikely that the animals send or receive sex-specific visual signals. And, Lerch and Servedio write, echinoderms show little evidence of emitting sex-specific chemical cues over a distance. The mathematical model would predict that animals like these, with a relatively long life and no apparent sex signals, might benefit from indiscriminate mating. In the case of the sand-sifting sea star, real-world observation confirms that at least some pair up for mating regardless of sex. Sea urchins do, too.

Lerch and Servedio’s model “gives us a deeper theoretical understanding to empirically test just how prevalent indiscriminate sexual behaviors are, (and) my guess is, pretty darn prevalent,” says Max Lambert, a conservation biologist and postdoctoral researcher at the University of California, Berkeley, who was not involved in the new work but co-authored a 2019 paper on the subject.

Yet single examples bearing out a theoretical prediction do not prove or disprove that same-sex sexual behaviors sit at the root of the vertebrate family tree. Evolution has been known to shape, dispense with, and yet again shape similar tactics and features over millions of years. It is possible that some species showing these behaviors, including many insects and spiders, might do so from mistaken identity—an imperfect read of a sex-specific signal—rather than by way of a reproductive gamble. After all, some of these animals even occasionally choose the wrong species. Yet another suggested explanation is the undertaking of noncommittal trial runs in preparation for the real thing.

Vasey says multiple evolutionary pathways probably generate same-sex sexual behaviors. “You can certainly see in a particular ecological context how that tactic—if it moves, mate with it—might be a good one,” Vasey says. But “whether you can jump from there to say it was the ancestral pattern? That’s another question that will require more real-world studies to answer.”

For the moment, debate on the topic continues. Lambert, with first author Julia Monk and colleagues, last year published a paper in Nature Ecology & Evolution proposing that some degree of same-sex activity could have been part of an ancestral repertoire of behaviors, after which sex-based signals arose and allowed for more selective mating.

But this proposition highlights a chicken-or-egg question about which came first: sex-specific signals, or different-sex sexual behavior. In the absence of eyewitnesses, the best scientists can do is start with plausible ideas and devise ways to test them. The testable parts of these ideas often rely on the kinds of mathematical models that Lerch and Servedio developed in their paper.

“We were hoping in part to stimulate exactly this type of research, so I was happy to see someone building that argument and testing it theoretically,” says Monk, a Ph.D. candidate and ecologist at the Yale School of the Environment.

A group of researchers wrote a critical response to the hypothesis that Monk and her colleagues proposed, calling for less theory and more testing. Vasey agrees about the need for more hard evidence. “I personally would like to see more data collection to accompany all of this theorizing,” he says. “We need to see what real animals are doing in the real world, because the models are only as good as the assumptions that underlie them.”